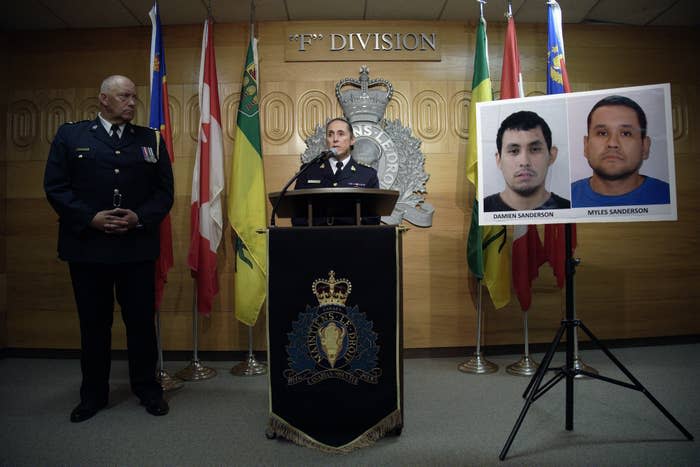 Ten people were killed in a series of stabbings in Saskatchewan, Canada, on Sunday, and two men, police say, are suspects.

Thirteen active crime scenes are currently under investigation in the James Smith Cree Nation area and the village of Weldon, and 18 other people have been injured. According to authorities, some victims may have been targeted and others attacked indiscriminately.

According to police, the first report of a stabbing was received at 5:40 a.m. local time, and numerous other calls came from other locations in the following minutes. The suspects were identified by authorities as Damien Sanderson and Miles Sanderson.

“It is appalling what has happened in our province today,” Rhonda Blackmore, commander of the Saskatchewan Royal Canadian Mounted Police, said at a news conference Sunday afternoon.

The two men were later spotted driving a black Nissan Rogue in Regina, a city of 250,000 about 100 miles north of the Montana border, around 11:45 a.m. They are considered armed and dangerous and so far no information has been released about a possible motive.

“We urge the public to take appropriate precautions. Do not leave a safe location. Be careful about allowing others into your home,” the Saskatchewan RCMP said. tweeted. “DO NOT APPROACH suspicious persons. Do not pick up hitchhikers.”

A warning for the suspects has been extended to the neighboring provinces of Alberta and Manitoba, a huge area. But authorities said Sunday afternoon they have not seen the men since they appeared to be in the town of Regina.

“At this point, we don’t know if they have changed vehicles since this morning,” Blackmore said. “Their location and direction of travel is unknown, so we need everyone in the province to stay vigilant.”

Regina Police Chief Evan Bray said the two men were still at large on Monday and asked the public for their help, adding that he was sure someone has information that could lead to the suspect’s location.

On Monday, the Saskatchewan RCMP said it had charged both men with the attacks.

Authorities also said warrants have been issued for their arrests and further charges are expected as the investigation progresses.

In a statement, Blackmore of the Saskatchewan RCMP said authorities are using all human, investigative and technological resources to locate and arrest the two men.

“Hundreds of Saskatchewan RCMP employees are committed to this research,” Blackmore said. “This includes operators taking 911 calls and tips, to frontline officers patrolling our streets to the on-site specialized forensic and Major Crime Unit teams who continue to follow up on all information and evidence gathered.”