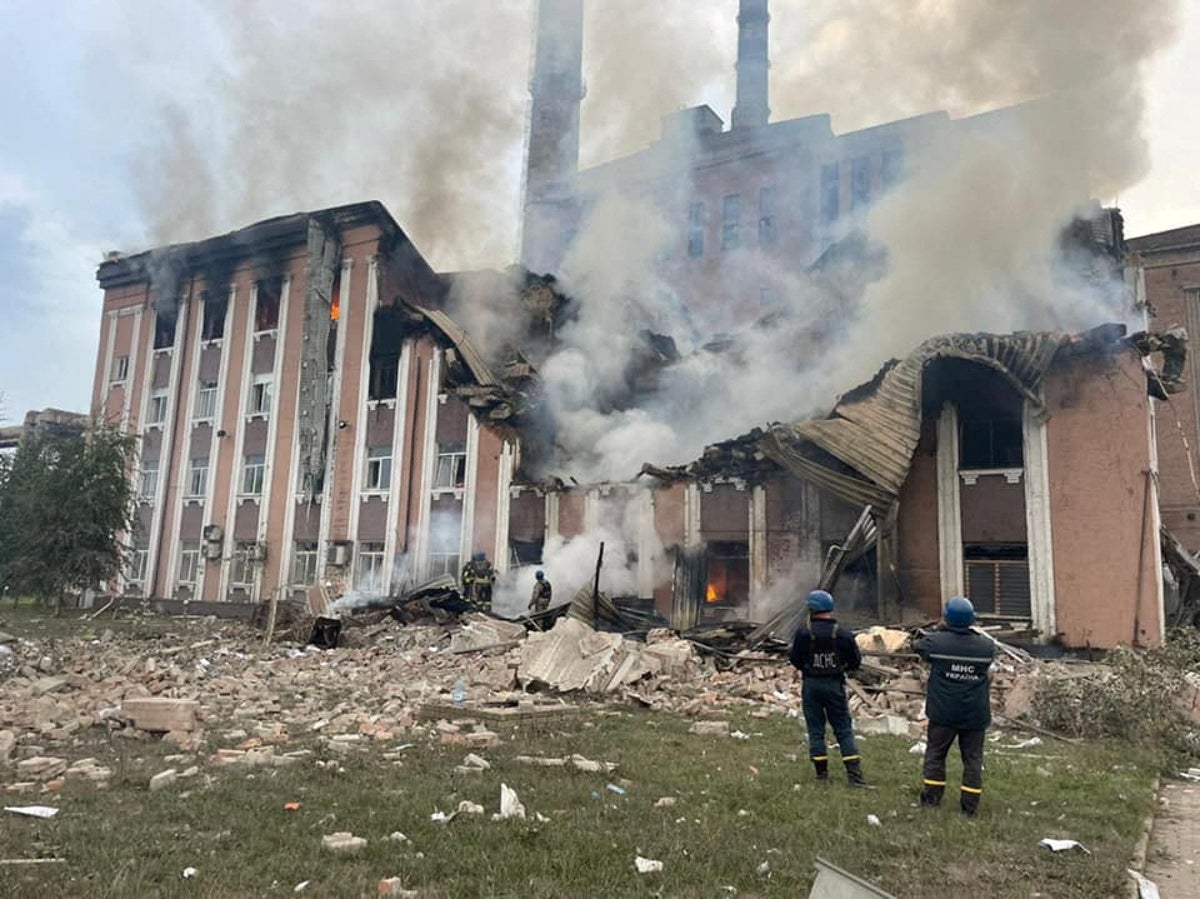 In a statement on the Telegram Messenger app, Donetsk separatist mayor Alexei Kulemzin said 13 civilians, including two children, had been killed in the attack on Donetsk’s Kuybyshevsky district.

He said the number of injured was confirmed.

The city of Donetsk has been controlled by the Russian-backed Donetsk People’s Republic since 2014. The Ukrainian army still holds positions in the outskirts of Donetsk and the city has come under repeated artillery fire in recent months.

Meanwhile, Ukraine accused Russia of “nuclear terrorism” after it reportedly hit a facility near a nuclear power plant in the south of the country.

Thirteen people were killed Monday in artillery shelling in the separatist-controlled city of Donetsk, the city’s Russian-backed mayor said.

In a statement on the Telegram Messenger app, Donetsk separatist mayor Alexei Kulemzin said 13 civilians, including two children, had been killed in the attack on Donetsk’s Kuybyshevsky district.

He said the number of injured was confirmed.

The city of Donetsk has been controlled by the Russian-backed Donetsk People’s Republic since 2014. The Ukrainian army still holds positions in the outskirts of Donetsk and the city has come under repeated artillery fire in recent months.

According to the adviser to the mayor of Mariupol, Petro Andrushchenko, Russian troops have stepped up “filtration” in occupied Mariupol.

The troops have also arrested local residents, as reported by Kyiv Independent on Twitter.

As part of his bid to get rid of Russian gas, German Chancellor Olaf Scholz is set to sign liquefied natural gas (LNG) contracts with the United Arab Emirates (UAE).

“The gas supply is slowly expanding. The government is in permanent talks with many countries,” said Economic Affairs Minister Robert Habeck.

Berlin is building LNG terminals in an effort to diversify Russian energy.

Four of the five European Union countries bordering Russia began turning away Russian tourists at midnight on Monday, saying they were not allowed to travel while their country is at war with Ukraine.

Poland, Estonia, Latvia and Lithuania imposed new restrictions when Finland decided to remain open, although it has reduced the number of consular appointments for Russian visa applicants.

The move was the latest in a series of sanctions and other steps taken by the European Union or its member states since Moscow invaded Ukraine in what it calls a “special military operation”.

The EU has banned all flights from Russia, leaving only rail and road links available, and this month it agreed to limit the issuance of free-travel Schengen visas.

The rocket attack on the Pivdennoukrainsk nuclear power plant in the southern Mykolaiv region of the besieged country took place just 300 meters from the reactors, officials from Ukraine’s state nuclear organization Energoatom, who called the latest rocket attack an act of nuclear terrorism by the Russian military, said.

“Today at 00:20 a.m., the Russian army carried out a rocket attack on the industrial estate of the southern Ukraine nuclear power plant. [SUNPP]”, it confirmed.

“A powerful explosion occurred just 300 meters from the SUNPP reactors. The shock wave damaged the NPP buildings and more than 100 windows were broken,” the state agency said in a statement.

The Kremlin has dismissed claims that Russian troops committed war crimes in the Ukrainian territory of Kharkov as a “lie”.

“It’s the same scenario as in Bucha. It is a lie, and of course we will defend the truth in this story,” Kremlin spokesman Dmitry Peskov said Monday, when asked about statements by the Ukrainian president that Russian troops had committed war crimes in Ukraine’s Kharkov region.

The Princess of Wales welcomed the First Lady of Ukraine to Buckingham Palace on Monday ahead of Queen Elizabeth II’s state funeral.

Kate held an audience with Olena Zelenska at the royal residence on Sunday afternoon, where they were pictured talking.

Footage shows the couple sitting side by side in front of a fireplace on gingham armchairs with purple orchids in the background.

Russia claims to be ready for prisoner swap talks

Russia’s foreign ministry has said it is ready for talks over a prisoner exchange to release US citizens detained in Russia, but that the US embassy in Moscow “did not fulfill its official duties” to maintain the dialogue. to keep.

State Department spokeswoman Maria Zakharova said: “We have stated many times that we are ready for negotiations to resolve the fate of US citizens convicted in Russia and Russian citizens in the US.”

Russia has previously suggested it is open to a prisoner exchange, including US Marine Corps veteran Paul Whelan, basketball star Brittney Griner and Viktor Bout, a Russian arms dealer imprisoned in the United States.

US President Joe Biden met with the families of Whelan and Griner at the White House on Friday, with press secretary Karine Jean-Pierre saying the administration is determined to “explore all available avenues to bring Brittney and Paul home safely”.

Ukraine’s nuclear power operator has accused Russia of “nuclear terrorism” after it reportedly hit a facility near a nuclear power plant.

Energoatom said Moscow’s forces had hit an industrial complex, including the Pivdennoukrainsk nuclear power plant in the Mykolaiv region.

Her husband was recently labeled a “foreign agent” for his opposition to the conflict.