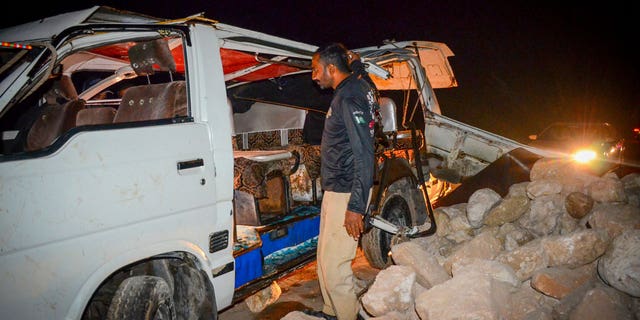 A van fell into a water-filled ditch in flood-hit southern Pakistan, killing 20 passengers — mostly women and children — and injuring 13 others, police said on Friday.

The incident on a flood-weakened highway occurred in Sindh province on the Indus Highway. The road had been dredged in several places to drain floodwaters, but has not been repaired months later. Impoverished Pakistan is struggling to recover from record-breaking flooding, which killed more than 1,700 people and damaged roads and bridges.

Police officer Imran Qureshi said the van was taking passengers from Khairpur district to a famous Sufi shrine in Sehwan. He said 13 of the passengers were rescued and taken to a nearby hospital. Hospital officials said the dead included eight women and ten children aged 10 to 15. Two of the injured are said to be in critical condition.

A police officer stands next to a damaged passenger minibus after a nighttime accident in Sehwan in Sindh province, on November 18, 2022.
(Husnain Ali/TBEN via Getty Images)

The southern province of Sindh was hardest hit by flooding caused by unprecedented monsoon rains and exacerbated by climate change. The disaster has affected 33 million people since mid-June and damaged or washed away 2 million homes.

The catastrophic flooding in Pakistan, largely in Sindh, also washed away road links.