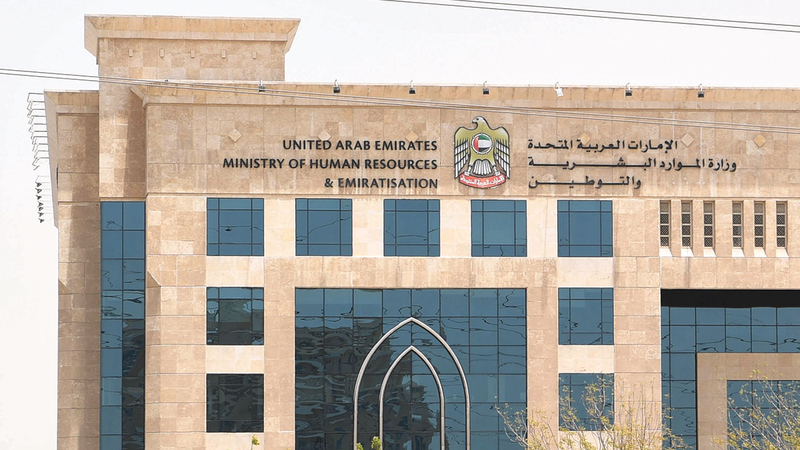 The Ministry of Human Resources and Emiratisation confirmed that the collection of contributions or fines for establishments affiliated with the private sector, which are not committed to the prescribed Emiratisation rates of 2% annually, which is not less than 6000 dirhams for each citizen who has not been appointed, will start from the first of next January, with an increase in the value of these contributions. Monthly ascending at a rate of 1000 dirhams every year in case the establishment does not modify its status.

The Ministry warned the employers against any manipulation or providing incorrect data related to the procedures and percentages of Emiratisation with them, explaining that the establishment of this violation requires a fine of 20 thousand dirhams for the facility in the event that it submits incorrect documents or data to the Ministry to obtain a benefit or service, and it can also be fined 20 One thousand dirhams (for each citizen worker) in case it is proven that a violation of fictitious settlement has been committed.

In detail, the Ministry of Human Resources and Emiratisation stated that the provisions of Cabinet Resolution No. (5/19) of 2022 obligate all establishments registered with the ministry, which have 50 or more workers, to raise their current Emiratisation rates at a rate of (2%) annually in skilled jobs, To reach 10% until 2026, by increasing the number of Emirati workers hired.

ALSO READ  "Lion Fish", an Interpol operation with Emirati participation that leads to the seizure of drugs worth 700 million dollars

The ministerial decision, of which Emirates Today obtained a copy, sets out the mechanisms for calculating the settlement percentages established in the employers registered with them, according to the total number of citizens working in the facility in relation to the total number of skilled workers, which begins with the appointment of at least one citizen for every 50 workers. skilled workers or for part of the 50, annually during the years of implementation of the decision that extends to five years, which means “the appointment of a citizen in establishments that include 50 skilled workers or less, and two citizens in establishments that include between 51 to 100 skilled workers, and three citizens in The facility, which includes between 101 to 150 skilled workers.

With regard to the mechanisms for collecting contributions or the amounts of violations imposed on establishments that are not committed to the prescribed Emiratisation rates, the decision stated that “establishments that are not committed to the specified Emiratisation rates must pay a monthly contribution of no less than 6000 dirhams for each citizen who has not been appointed, in accordance with Cabinet Resolution No. (5/19f) for the year 2022 referred to, provided that these contributions are collected, starting from the first of next January, with an upward increase in the value of these monthly contributions at the rate of 1000 dirhams each year in the event that the establishment does not modify its status.

ALSO READ  As part of the UAE's humanitarian efforts, "Al Hilal" continues to provide relief to the Sudanese villages of "Gadarif" most affected by the floods

The Ministry of Human Resources and Emiratisation has set four conditions for calculating the Emiratisation rates at establishments on the work permits of citizens registered in the Ministry’s approved systems. The first is that the citizen has a valid work permit, and the second is that his wages be paid through the wage protection system or any other system approved by a competent authority in The state to ensure the governance of the obligation to pay wages, while the third condition stresses that the citizen is registered with one of the pension funds approved in the state, and finally, that the relationship between the citizen and the facility is a contractual relationship that fulfills all the terms and conditions in accordance with the law regulating labor relations and its executive regulations and the decisions in force implementing them.

Mohammed bin Zayed and Mohammed bin Rashid: On the anniversary of the Prophet’s birthday… we renew his love and take inspiration from his biography...

Sheikha Fatima: The biography of the “Prophet of Humanity” established the values ​​of justice, compassion and peace among all humanity