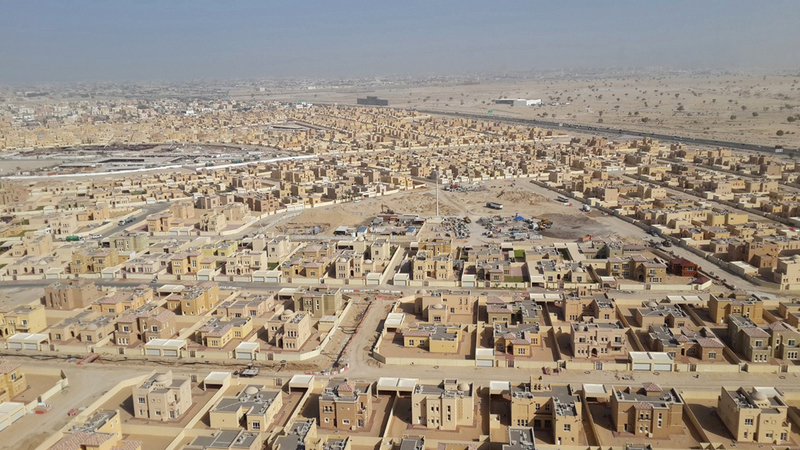 Since the beginning of 2022, the housing file of citizens in the UAE has received exceptional care that has contributed to achieving qualitative leaps in this vital sector, both at the organizational level and at the level of huge financial appropriations for the implementation of plans and projects, which amounted to about 25.28 billion dirhams at the federal and local levels.

The UAE witnessed a set of decisions and initiatives that contributed to drawing a clear road map for the future of the government housing sector in the country, through which procedures for obtaining housing support and diversifying sources of financing were facilitated, as well as achieving the main goal of reducing the waiting period for those eligible for support.

On May 9, the Council of Ministers adopted a new policy for federal government housing loans aimed at providing financing for housing loans through partnership with the private sector and national banks, in order to support the goals associated with reducing the waiting period for applications.

In light of the new policy, the housing finance program aims to issue 13,000 housing decisions for the next five years (2022-2026) at a cost of 11.5 billion dirhams, and to meet the future needs of the country’s citizens, which in all aim to enhance family stability and achieve prosperity and a decent and secure life for citizens.

According to the new policy, the Sheikh Zayed Housing Program finances the value of the profits resulting from loans on behalf of citizens, which contributes to doubling the number of decisions that can be issued annually for loans and accelerating the completion of applications, especially during the next five years, in addition to the sustainability of funding and coverage of housing applications through partnership. with the private sector.

Less than a month later, the first practical steps to translate the new federal housing loan policy on the ground came, as the Council of Ministers approved, during its session held on June 7, housing loans for citizens worth 2.4 billion dirhams during the next six months, with 500 beneficiaries per month. This year 2022 targeting 3000 beneficiaries of housing loans.

On July 6, the Ministry of Energy and Infrastructure, represented by the Sheikh Zayed Housing Programme, signed a joint memorandum of understanding with four national banks, namely First Abu Dhabi Bank, Emirates NBD, in addition to Dubai Islamic Bank and Abu Dhabi Islamic Bank, according to which the Home loan financing.

In conjunction with the signing of the memorandum of understanding, the Ministry of Energy and Infrastructure announced the names of the beneficiaries of the first batch of the new housing policy, which included 500 decisions worth 400 million dirhams, followed by yesterday, August 3, announcing the approval of the second batch of beneficiaries of loans within the new housing policy. Which also included 500 decisions worth 400 million dirhams.

At the local level, the citizens’ housing train is moving at full speed, as this year has witnessed a group of huge financial allocations for this vital sector in both the Emirate of Abu Dhabi and the Emirate of Dubai, in addition to the Emirate of Sharjah.

ALSO READ  A woman demands 375,000 dirhams from her ex-husband for a vehicle she bought for him

In the Emirate of Abu Dhabi, the total beneficiaries of the two housing benefits packages that were disbursed during the current year amounted to more than 2447 male and female citizens, with a total value of 3.86 billion dirhams, which included building loans, maintenance and expansion, rebuilding and demolition of construction, loans to purchase ready homes, and exemption of deceased and retired persons with disabilities. Limited income from paying the rest of the dues.

In turn, the Emirate of Dubai adopted on April 24, a huge housing package at a total cost of 6.3 billion dirhams, and includes housing and land for 4,610 citizens, as part of the Emiratis’ housing program in the emirate aimed at continuing intensive efforts to implement the development and urban strategy of the Emirate of Dubai to be the best city for work and life in the world.

The package included the construction of 1,110 housing units in the second Al Khawaneej area, and the allocation of 3,500 plots of land in the Umm Nahd Al Rabea and Al Awir areas.

Moving to the Emirate of Sharjah, the value of the two payments of housing support aid for citizens that were approved since the beginning of this year amounted to 727 million dirhams, benefiting about 1,047 people.

During this year, the value of housing support will reach one billion dirhams, in implementation of the directives of His Highness Sheikh Dr. Sultan bin Muhammad Al Qasimi, Member of the Supreme Council and Ruler of Sharjah, who directed the necessity of keeping pace with the increasing number of citizens in need of housing, accelerating the pace of projects and reducing the duration of housing delivery to citizens.

Emphasizing that the citizens’ housing file was and will remain at the top of the leadership’s priorities, His Highness Sheikh Mohamed bin Zayed Al Nahyan, President of the State, on June 5, ordered the completion of all housing grant applications for previous years, within the “Sheikh Zayed Housing Programme,” through initiatives His Highness, the President of the State, with an amount of 2.3 billion dirhams, as part of his keenness to enhance family stability for citizens, provide a decent life, and achieve their happiness. The Ministry of Energy and Infrastructure stated that the initiative includes requests for housing grantees within the terms of the “Sheikh Zayed Housing Program” and includes the construction, completion and maintenance of housing. The Emirate of Dubai adopted last April a huge housing package at a total cost of 6.3 billion dirhams. À archival

The Bharat Express News - August 19, 2022 0
Taxpayers are reportedly on the hook for a nearly $500,000 security fence being built around President Joe Biden's home in Delaware's Rehoboth Beach. The project,...