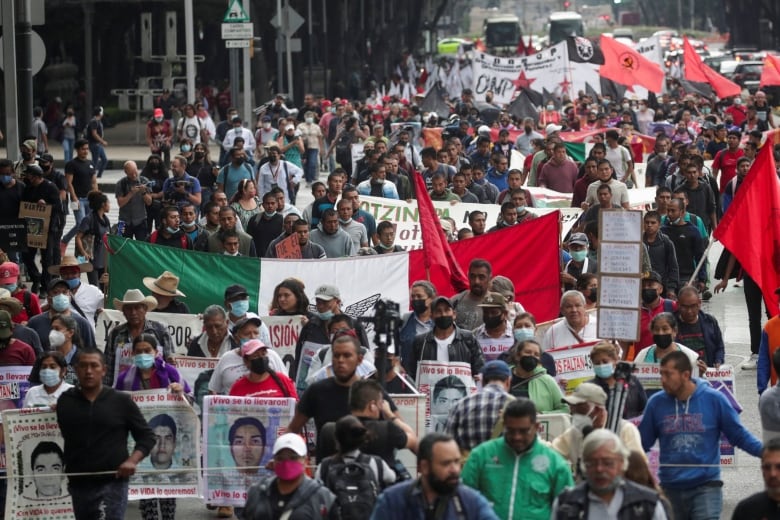 Three members of the Mexican military have been arrested on suspicion of involvement in the 2014 disappearance of 43 students in southern Mexico, the government said on Thursday.

Ricardo Mejia, assistant secretary of public security, said the commander of the army base in Iguala, Guerrero, was among those arrested in September 2014, when students of a radical teacher training college were kidnapped. Mejia said a fourth arrest is expected soon.

Mejia did not give names of those arrested, but the commander of the Iguala base at the time was Colonel Jose Rodriguez Perez. Last month, a government truth commission re-examining the case released a report citing Rodriguez as responsible for the disappearance of six of the students.

Interior Minister Alejandro Encinas, who headed the commission, said last month that six of the missing students were allegedly kept alive for days in a warehouse and then handed over to Rodriguez who ordered their murder.

The report had called the disappearances a “state crime” and emphasized that authorities had been closely monitoring teacher training students in Ayotzinapa from the moment they left their campus following their kidnapping by local police in the city of Iguala that night. A soldier who had infiltrated the school was among the kidnapped students, and Encinas claimed that the military was not following its own protocols and tried to rescue him.

“There is also information corroborated by 089 distress calls that reportedly six of the 43 missing students were held for several days and held alive in what they call the old warehouse and handed over to the Colonel from there,” Encinas said. . “The six students are said to have lived four days after the events and were murdered and disappeared on the orders of the Colonel, allegedly then-Colonel Jose Rodriguez Perez.”

Numerous government investigations and independent investigations have failed to yield any conclusive account of what happened to the 43 students, but it appears that local police took the students off several buses in Iguala that night and handed them over to a drug gang.

The motive remains unclear. Their bodies have never been found, although fragments of burnt bone have been linked to three of the students.

The military’s role in the disappearance of the students has long been a source of tension between the families and the government. From the outset, there were questions about the military’s knowledge of what was happening and its possible involvement. The students’ parents had been demanding for years that they be allowed to search the army base in Iguala. It was not until 2019 that they gained access together with Encinas and the Truth Commission.

Shortly after the truth commission’s report, the Mexican Attorney General’s office announced 83 arrest warrants, 20 of which were for members of the military. Then federal agents arrested Jesus Murillo Karam, who was Attorney General at the time.

Since the arrest warrants were announced, doubts had increased in the weeks when no arrests had been announced. The government of Mexican President Andres Manuel Lopez Obrador has also formed a closer public ties to the military than in recent history.

The president urged to move the newly established National Guard under full military authority, and his allies in Congress are trying to extend the time for the military to continue a police role on the streets until 2028.

On Thursday, Mejia also rejected any suggestion that Jose Luis Abarca, then mayor of Iguala, would be released from prison after a judge released him from responsibility for the student’s kidnapping over lack of evidence. Even without the heavy kidnapping charges, Abarca still faces other organized crime and money laundering charges, and Mejia said the judge’s latest decision would be challenged. The judge similarly acquitted 19 others, including the man who was the Iguala police at the time.

The Miguel Agustin Pro Human Rights Center and other non-governmental organizations that have supported the families of the students said in a joint statement on Thursday that the government had so far not notified the families of the case against Rodriguez, nor of the charges brought against them. he would get.

They said that if Rodriguez’s prosecution were to emerge based on “solid evidence”, it could be highly relevant in holding the military accountable. The statement noted that there was “abundant” evidence of the collusion of soldiers from the Iguala base with organized crime.

The organizations also called on authorities to appeal the judge’s decision acquitting Abarca and others. They said the ruling was the result of poor work by the attorney general’s office that originally filed the charges, including the extensive use of torture that ruled out much of the evidence.

The Bharat Express News - October 7, 2022 0
CAlition confusion: where are we going wrong? If, like me, you've been away from South Africa...