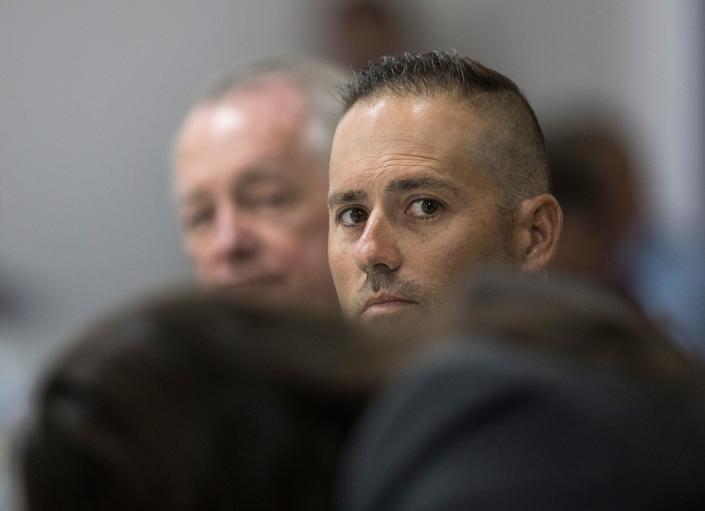 The FBI has arrested the former Louisville Metro Police detective who was fired for lying on the search warrant that led to the deadly 2020 raid on Breonna Taylor’s apartment, as well as three others, including the only officer charged by the state in related to Taylor’s fatal shooting.

Joshua Jaynes was taken into custody by the FBI on Thursday morning, said attorney Thomas Clay, who represents Jaynes.

Former Detective Brett Hankison also faces federal charges, according to Stew Mathews, who represented the fired LMPD officer during his Jefferson Circuit Court case for shooting into a nearby occupied apartment during the failed March 2020 raid.

Clay also said he was told that two other LMPD employees involved in the Taylor case and search warrant, Kelly Hanna Goodlett and Kyle Meany, are also facing federal charges. It was not immediately clear whether they had lawyers to comment.

Clay said it was unclear what the official charges against Jaynes were, but he believes the charges involved conspiracy to falsify data in connection with a federal investigation.

The charges were not immediately available in the federal court’s tracking system.

Clay added that Jaynes has been taken to an Oldham County detention center and that he is not sure when his first court hearing will take place.

FACT CHECK 2.0:Separating the Truth from the Lies in the Breonna Taylor Police Shooting

Jaynes was fired in January 2021 for inserting an untruthful statement in his affidavit for the search warrant to search Taylor’s apartment.

In the affidavit, which he swore in front of a judge, Jaynes wrote that he verified through a US postal inspector that Taylor’s ex-boyfriend Jamarcus Glover, a suspected drug trafficker, had packages delivered to her apartment.

But Jaynes had spoken to another officer, Sgt. Jonathan Mattingly, who had received information from the Shively Police Department, not the Postal Inspector.

Mattingly was shot during the raid by Taylor’s friend, who said he thought intruders broke into the apartment.

More:What You Need To Know About 7 Louisville Metro Police Cases The FBI Is Investigating For Misconduct

According to those Shively agents, postal inspectors said there were no packages. Police found no drugs or money in Taylor’s apartment after the fatal shooting.

Two other police officers involved in the Taylor case – Myles Cosgrove and Hankison – were also fired for their roles.

Earlier this year, a jury ruled that Hankison was not guilty of wanton endangerment charges related to bullets he fired into an occupied, neighboring apartment during the raid on Taylor’s apartment. He was the only officer charged at the state level in connection with the case.

The FBI has been investigating Taylor’s death since May 2020, when it opened its “color of law” case that focuses on allegations made by police officers or other officials who have used their authority inappropriately, including excessive force, false arrest or obstruction of justice. the legal process.

Last year, the DOJ also opened a “patterns and practices” investigation into LMPD and the Louisville Metro government.

Garland said last year that the investigation, which is pending, would focus on several areas, including whether the department:

The DOJ, as part of its investigation, also completed a comprehensive review of LMPD’s policies and training, along with an assessment of the effectiveness of its officer oversight and accountability system, including its investigations of misconduct.

This story is being updated.