Four people died on Thursday, August 4, after a car carrying a ferry Lunga Lunga MP, Khatib Mwashetani’s aides, was involved in an accident.

Preliminary reports indicated that the driver lost control of the vehicle after a tire burst while speeding on the Likoni – Lunga Lunga road.

The four victims who died were members of Mwashetani’s campaign team and were on their way to popularize his candidacy.

One person survived the ordeal and was rushed to a nearby hospital.

Lunga Lunga OCPD Peter Nzimbi stated that they had launched an investigation into the accident, adding that they would provide more details after the exercise was completed.

“They were coming from Kanana on their way to Lungalunga when the vehicle had a blowout and started rolling. Preliminary investigations indicate that the vehicle may have been traveling at high speed,” he said.

He added that the Prado rolled several times after veering off the road.

The police chief confirmed that the UDA politician was not part of the entourage with reports indicating that Mwashetani was at the Tononoka property in Mombasa County for Ruto’s meeting.

Furthermore, Nzimbi warned motorists, especially those involved in campaigns, to obey traffic rules, despite trying to beat the campaign timelines ahead of the August 9 polls.

“I would say they should not speed and be alert on the road,” he said.

In June, government spokesman Colonel (Rtd) Cyrus Oguna released guidelines on the use of campaign cars after it was found that accidents on major highways in the country had increased as a result of increased campaign activity.

“Over the past few weeks, the number of road accidents has increased, most of which have resulted in unnecessary loss of innocent lives.

It is noted with great concern that motorists and boda boda drivers exhibit a high degree of lawlessness, with total disregard for safety measures, especially during the campaign trails, endangering not only their lives, but also those of other road users,” the statement reads in part. 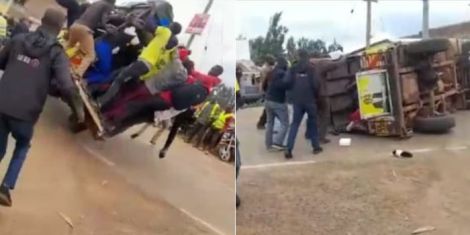 A collage of the campaign vehicle of South Mugirango MP Silvanus Osoro overturning in Kisii province.