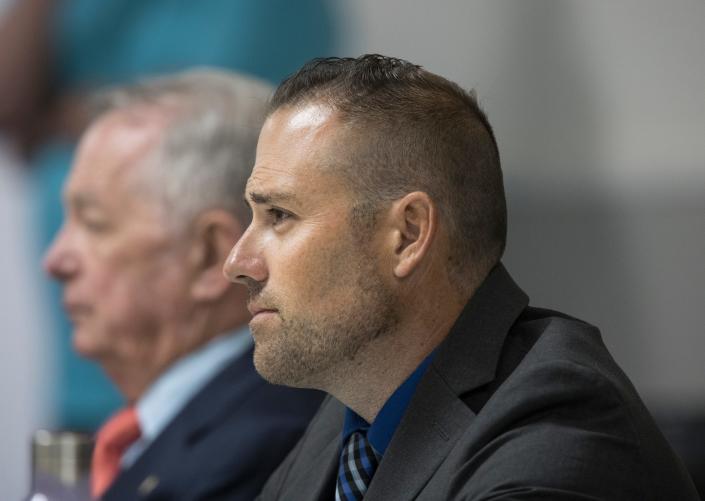 Former officers Joshua Jaynes and Brett Hankinson, along with Officer Kelly Ann Goodlett and Sgt. Kyle Meany ― who are now in the process of being terminated ― were indicted by a federal grand jury and arrested Thursday.

One indictment relates to the untruthful actions Haynes, Meany and Goodlett allegedly took in obtaining the warrant to search Taylor’s apartment.

In a separate indictment, Hankison is charged with using unconstitutionally excessive force during the raid on Tayor’s apartment.

FACT CHECK 2.0: Separating the truth from the lies in the Breonna Taylor police shooting

After the DOJ release, LMPD Chief Erika Shields began the termination procedures for Meany and Goodlett, according to a release from LMPD.

Jaynes was a detective in the Place-Based Investigations unit and had worked for LMPD for about 16 years before being fired in January 2021 for inserting what former interim police Chief Yvette Gentry found to be an untruthful statement in his sworn affidavit for the warrant to search Taylor’s apartment.

He has been indicted on federal charges of deprivation of rights, conspiracy, and falsification of records in an FBI investigation.

The indictment alleges that Jayne deprived Taylor of her constitutional rights by knowingly including false, misleading and out-of-date information in the affidavit used to obtain the warrant to search Taylor’s home. Additionally, the affidavit in support of the search warrant omitted material information and officers lacked probable cause for the search, according to the indictment.

More: What to know about 7 Louisville Metro Police cases the FBI is investigating for misconduct

Jaynes said he’d verified through a U.S. Postal Inspector that Taylor’s ex-boyfriend Jamarcus Glover, a convicted drug trafficker, was having packages delivered to her apartment.

But Jaynes had actually spoken to another officer, Sgt. Jonathan Mattingly, who had gotten information from Shively Police, not the postal inspector.

And, according to those Shively officers, postal inspectors said there were no packages.

After Taylor’s killing, the indictment alleges that Jaynes attempted to cover up this lie by asking Mattingly to say he had told Jaynes about the packages. But, Mattingly said he told Jaynes both before and after the killing he was unaware of any information that Glover received packages at Taylor’s apartment.

Jaynes continued in his efforts to cover up the lie, with the assistance Officer Kelly Goodlett, according to the indictment.

The two allegedly called, texted and met with each other to discuss the false information in the warrant and to coordinate their false cover story ― which included meeting in Jayne’s garage after news broke that a postal inspector announced Glover had not received packages at Taylor’s address.

During the meeting, Jaynes allegedly told Goodlett that “they needed to get on the same page because they could both go down for putting false information” in the warrant, the indictment states. They both then allegedly agreed to tell investigators that Mattingly had told them Glover had packages to sent to Taylor’s.

Jaynes also allegedly contacted other officers and pressured them to support for the false information.

His third federal charge is that he continued reiterating this false information in an official investigative letter given to investigators May 1, 2020.

What charges does Kyle Meany face?

Meany was an LMPD detective who supervised the PBI unit at the time of Taylor’s killing and had been with the department since 2013.

He has been indicted on federal charges of deprivation of rights and giving a false statement to federal investigators.

Like Jaynes, the indictment alleges that Meany knew the affidavit used to get a warrant to search Taylor’s home included false, misleading and out-of-date information. He approved the warrant despite this knowledge and despite knowing the warrant would be executed by other officers, creating a dangerous situation.

His second charge of providing false information is related to the entry of Taylor’s home.

Meany allegedly told FBI investigators that LMPD’s SWAT unit had asked for no-knock authority but that no such request had been made.

Goodlett was a detective in the PBI unit that was with the department for about 10 years before Thursday’s termination.

She has been indicted on the federal charge of conspiracy.

The indictment alleges that Goodlett saw a copy of the warrant to search Taylor’s apartment three days before its execution and she saw it alleged Jaynes had verification from a postal inspector that Glover was receiving packages there. Goodlett had already known this wasn’t true because Jaynes had told her he didn’t have any evidence, but Goodlett didn’t change or object to the statement, the indictment states.

Additionally, Goodlett added a paragraph to the affidavit stating investigators verified, through databases, that listed Taylor’s address as Glover’s as of February 2020, which the indictment states was misleading.

After Taylor’s killing, Jaynes and Goodlet conspired together to coordinate a cover story ― which included calls, texts and meeting in Jayne’s garage, “to get on the same page.”

In an unrelated FBI investigation that began in June 2021, Goodlett was also named as one of several officers who were allegedly involved in throwing drinks at people in Louisville’s West End.

As a result, she was reassigned in the department.

Two other LMPD officers were recently convicted of federal civil rights violations related to the investigation. Additionally, one of those officers also pleaded guilty to cyberstalking charges.

Those two are scheduled to be sentenced on Sept. 30. It is unclear if Goodlett will also face charges in this case.

What charges does Brett Hankison face?

Hankinson was a detective and worked for the department for about 17 years when he fired 10 rounds into Taylor’s apartment through a covered glass door and window during the attempted search warrant execution gone wrong.

Three of those rounds traveled into an adjacent apartment with a man, pregnant woman and 5-year-old child inside and in the aftermath, he was charged with three counts of wanton endangerment by a state grand jury.

He was fired after a former interim chief called the rounds he shot “a shock to the conscience.” He appealed his firing to the Police Merit Board, but the appeal hearing was set aside until criminal proceedings concluded.

In March 2022, he was found not guilty of those charges.

Thursday’s federal indictment charges Hankison with the deprivation of Taylor’s and her neighbor’s rights.

Hankison fired the shots into an occupied, neighboring apartment, “without a lawful objective justifying the use of deadly force,” Assistant Attorney General Kristen Clarke for the Civil Rights Division announced during a Thursday morning news conference alongside U.S. Attorney General Merrick Garland in Washington, D.C.

Why were officers at Taylor’s apartment?

Officers went to Taylor’s apartment March 13, 2020, at about 12:40 a.m. in an attempt to serve a search warrant as a part of a broader narcotics investigation targeting several homes simultaneously.

FACT CHECK 2.0: Separating the truth from the lies in the Breonna Taylor police shooting

Who is Kenneth Walker?

Kenneth Walker was Taylor’s boyfriend, who was with her inside the apartment when officers arrived. He is not related to Adrian Walker, one of the investigation’s main targets.

(Adrian Walker was later shot and killed in the West End in November 2020.)

Walker said after Taylor’s killing that he heard pounding at the door, but he did not hear anyone announce they were police.

Several neighbors also said they did not hear police announce themselves before forcing entry to the apartment. One person in the building at the time of the shooting who initially said he didn’t hear the police later said he did.

At 12:43 a.m., as officers broke down the door, Walker fired one shot, later saying he thought an intruder was breaking in.

Though seven officers were on scene for the warrant, only three fired their guns: Mattingly and detectives Hankison and Myles Cosgrove. They fired a combined 32 rounds throughout the apartment.

Taylor was struck six times and died in the hallway. The coroner’s office listed her time of death as 12:48 a.m.

Related:Breonna Taylor was briefly alive after police shot her. But no one tried to treat her

Walker wasn’t wounded. He was initially charged with assault and attempted murder for the shooting, but the charges against him were permanently dismissed.

Who was charged in Taylor’s death?

None of the three officers who fired their guns inside Taylor’s apartment were charged with her death.

Hankison was the only officer involved to face any charges, though those were related to endangering Taylor’s neighbors. He was fired in June 2020 for his role, which he appealed to the Police Merit Board.

The appeal hearing was set aside until criminal proceedings for three charges of wanton endangerment against him were concluded. In March 2022, he was found not guilty on the three counts.

Detective Myles Cosgrove was also fired for not “properly identify a target” when he shot 16 times into Taylor’s apartment. His termination was upheld by the merit board.

The third officer who discharged his weapon, Mattingly, was cleared of any wrongdoing by an internal LMPD investigation into policy violations in December 2020. He retired effective June 1, 2021.

This article originally appeared on Louisville Courier Journal: What to know about the charges against 4 cops in Breonna Taylor’s case