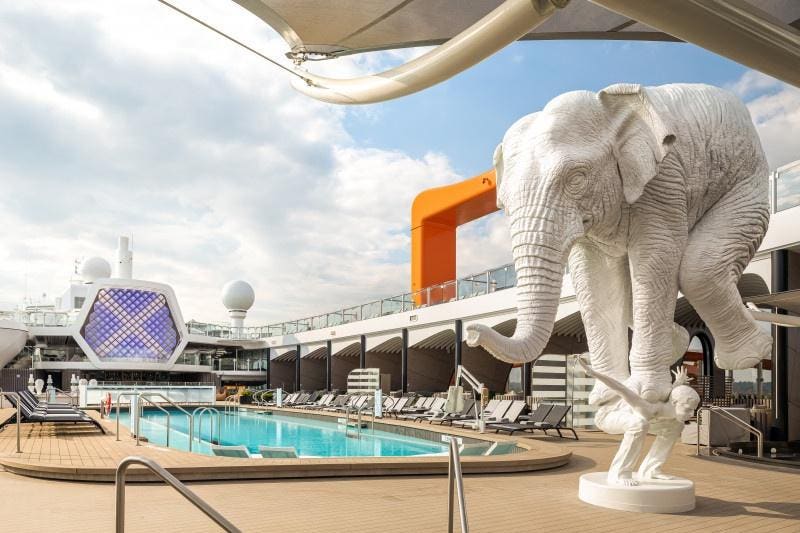 Celebrity is the cruise line that led my family to cruise nearly 25 years ago. My husband and I took our then small children to Alaska and we had such a surprisingly wonderful time that we continued on Celebrity trips to the Mediterranean and, as they got older, Scandinavia and Russia.

Last year, my husband and I went back to Alaska on Celebrity Millennium—the same ship as two decades ago—and it felt like little had changed. It was very comfortable and we enjoyed it as much as we originally had, but I really wanted to experience the line’s newer, critically acclaimed Edge series with its added luxuries and new technological features.

So when Celebrity announced the inaugural departure of Beyond, their third ship in the series, I was immediately on board. Beyond is one deck higher and 20 meters longer than the first two Edge ships, but is also captained by Captain Kate McCue, the first American female captain of a major cruise line. She is a force of nature that is already making a difference as a role model for a whole new generation.

It takes a lot of confidence to name a ship “Beyond” and I was worried it might not live up to expectations. But after a week of exploring the nooks and crannies – and the art collection; oh, his amazing art collection – I’m happy to report that the name seems to have become a self-fulfilling prophecy. Here are just a few reasons why:

As people return to travel, The Retreat, Celebrity’s luxury ship within a ship concept, is sold out on every cruise. So on Beyond, they’ve added 22 more Retreat suites than on their other Edge series ships.

Everything about The Retreat, from the private restaurant, lounge, and sundeck to the fact that Retreat guests get special access, reserved seating, and priority access to almost everything, makes it well worth the extra money.

Loved my Retreat Sky Suite on Beyond and can tell you it is one of the best designed staterooms I have ever stayed in. Not only was it very open and spacious and bright, but the bed overlooked the porch – something I could figure out any cruise ship doing. The bathroom also had a “window” that I kept open so I could enjoy the ocean view even while brushing my teeth.

Half the appeal of cruising is the focus on food, and Beyond boasts 32 different food and beverage options, including four “main” restaurants. This in itself is an innovative, very welcome change, offering guests four options for their included meals, allowing them to eat at different restaurants at no extra cost. Although the menu is largely the same, each restaurant also offers exclusive dishes based on its theme – American, French, Italian, Mediterranean – and has its own distinctive look.

I am a believer in the buffet on cruise ships and Beyond’s is great. In fact, the Oceanview Cafe is a dining room of sorts, with literally something for everyone, whether you’re a meat lover or vegetarian. You can even have pizza made to your liking. I haven’t missed a day (or a meal) at the popular ice cream counter.

Beyond also features a variety of specialty restaurants, including Le Voyage, Chef Daniel Boulud’s first Michelin-starred seaside restaurant. It’s a beautiful, intimate space hidden in the Grand Plaza with brioche that I still dream about, but my favorite restaurant on the ship was the Garden-y Eden, a delightful setting with an exciting menu full of surprises.

Let’s face it: cruise ship shows can be on the cheap side. That’s why Simon Cowell often told American Idol contestants that he rejected that they would be better suited to singing on a cruise ship. That critique can now turn into a compliment, though, as Celebrity has completely raised the bar for cruise ship entertainment with a variety of shows worth dashing through dessert if necessary.

The three original productions I saw – arte, elements and Stage door – were better than any shows I’ve seen on a cruise. The way technology was used to provide wallpapers was brilliant. Brilliant. The shows were creative, beautiful and definitely crowd pleasers. Can’t wait to see what they come up with, though I’d love to check them all out again.

As someone who doesn’t drink, cruise ship atriums usually don’t do much for me. Sure they can be beautiful, but they’re where people sit on couches with cocktails, listening to often generic live music and they’re not somewhere I felt compelled to spend a lot of time. I usually just walk through it on my way to somewhere else.

The Grand Plaza on Celebrity Beyond is a revelation. Three decks high and smack in the middle of the ship, there always seemed to be a reason to go there – whether it be a premium coffee drink and free pastry at the popular Café al Bacio or dinner at one of the many specialty restaurants. Even if there was no reason, I – along with dozens of other eager spectators – stopped to admire the juggling bartenders at the Martini Bar (how do they do that?!) or watch the choreographed light show from the impressive LED chandelier. People always seemed happy to be there and it was a happy party atmosphere rather than a rowdy one, which I found irresistible.

I’ve never understood people who don’t use ship spas, especially on days at sea, and The Spa on Beyond is the perfect example of why I feel this way. Lying down in a heated tiled lounger overlooking the sea after a really great massage – and I’ve had some really great massages there – is such a gift and really makes you appreciate how lucky you are to be exactly where you are .

Beyond’s SEA Thermal Suite offers everything from steam and salt rooms to hammam and rainwater therapy. It is a treat for the senses and a lovely place to spend a few hours. The Thermal Suite is free for AquaClass guests, but is open to all guests for an additional fee.

Touch The Vitality Of Nature At This Portuguese Country Retreat