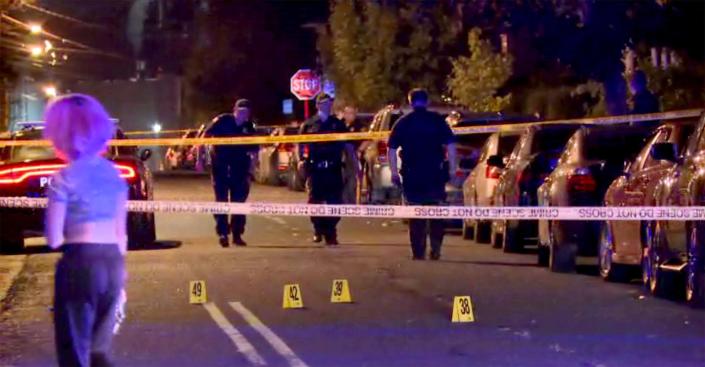 NEWARK – Seven members of a New Jersey gang associated with the Bounty Hunter Bloods, all from Somerset and Middlesex counties, have been charged with conspiracy by Racketeer Influenced and Corrupt Organizations (RICO) in connection with multiple murders and other violent crimes, announced US Attorney District of New Jersey Philip R. Sellinger.

Walter Boyd, 34, known as Walt and Walt Daddy; Isiah Daniels, 33, known as Ice; Joel Lyons, 21, known as Jayski; Gede Maccelus, 21, known as G Baby; Armando Ortez, 24, known as Mando; Malik Stringer, 24, known as Rambo and Kimani Wanyoike, 21, known as Ki, have been charged with conspiracy including multiple murders, fraud and narcotics distribution, according to the US attorney’s office.

Lyons, Daniels and other gang members were reportedly involved in the Delafield Street shooting on September 13, 2020 in New Brunswick, which killed two people and injured seven others.

Daniels and Wanyoike are in federal custody on previous related federal charges. Lyons and Ortiz are currently incarcerated in state prison. Boyd, Maccelus and Stringer are currently in state custody in connection with the charges filed Tuesday. According to the US Attorney’s Office, they are all due to appear in court for the first time.

According to court documents, Boyd, Daniels, Lyons, Maccelus, Ortiz, Stringer and Wanyoike were allegedly members and associates of the Bounty Hunter Bloods, which operated under the umbrella of the neighborhood street gangs known as “Parkside” in Somerset. and “The Ville”. in New Brunswick.

According to the US Attorney’s Office, gang members, including the defendants, were alleged to have been involved in attacks, shootings and murders, some of which targeted rival gang members and involved 17 victims.

The US Attorney’s Office said the incidents included:

Around June 12, 2020, Daniels, along with other gang members, drove at least two cars to a rally to pay tribute to an alleged rival gang member who had died. During the meeting, members of the Bounty Hunter Bloods got out of their cars and allegedly shot at a vehicle near Churchill Avenue in Franklin.

Around September 13, 2020, Lyons, Daniels and other gang members used a stolen car to allegedly commit a shooting in New Brunswick that caused the death of a person believed to be a gang delinquent, another person and resulted in injuries to seven other people.

Though the US Attorney’s Office has not identified the victims, Lionel Macauley, 28, of Somerset, and Anthony Robinson, 23, of New Brunswick, were both fatally injured when gunshots rang out in Delafield Street’s New Brunswick house party near Rutgers University. on September 13, 2020 in which seven other people were injured.

Around July 19, 2021, Wanyoike possessed a firearm allegedly used in a shooting on or about April 30, 2021 in North Brunswick, where at least seven rounds of .40-caliber ammunition were fired from a red Hyundai while targeting an alleged rival to the Bounty. Hunter Bloods.

The month before, around June 18, 2021, Boyd and other gang members gathered outside a New Brunswick hospital to support and pay respects to a high-ranking member of the Bounty Hunter Bloods, who had allegedly been shot by rivals hours earlier. Upon seeing a white jeep that they believed had been occupied by rivals, Boyd and two other gang members followed the vehicle to the Easton Avenue area in New Brunswick and after they stopped, one of the gang members reportedly shot the jeep, where one person was killed and injured. another.

Around July 24, 2021, while he was with other gang members, Stringer possessed a firearm and allegedly attempted to fire it at an alleged rival gang member in New Brunswick.

On January 9, 2022, while he was with another gang member in New Brunswick, Stringer got into a narcotics distribution showdown with alleged rival gang members and allegedly shot at them, killing one person and injuring another.

And on January 20, 2022, while in Franklin with another mobster, Maccelus allegedly possessed a loaded firearm that was allegedly used in a shooting in New Brunswick that same day.

In addition, members of Bounty Hunter Bloods, including the defendants, are alleged to have routinely distributed narcotics in and around the gang’s property in both New Brunswick and Somerset, and were involved in various wire and bank fraud schemes to enrich themselves and other gang members. , including plans to defraud the federal Paycheck Protection Program, according to the U.S. Attorney’s Office.