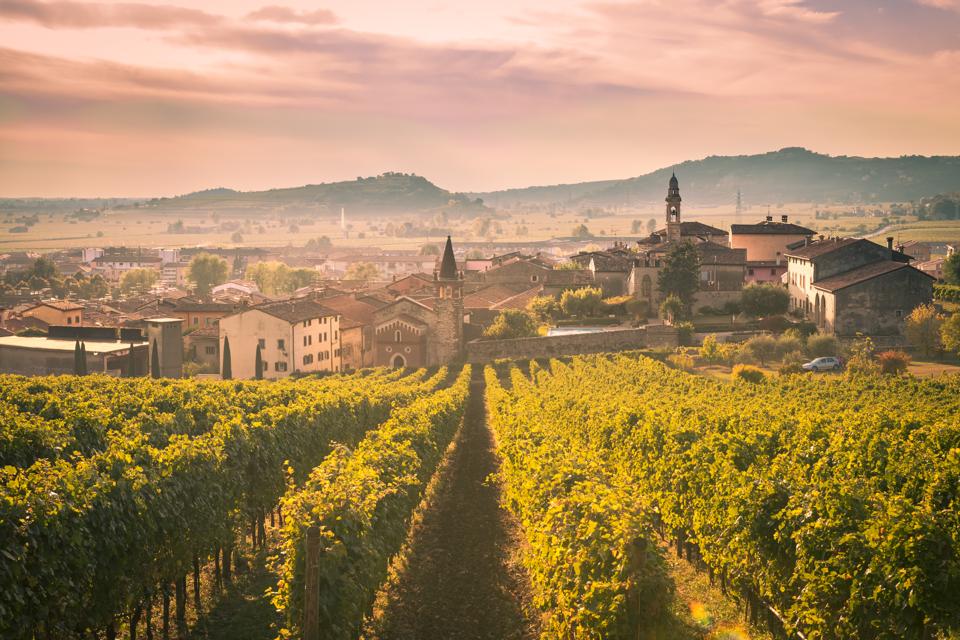 Normally, Venice, like Florence, attracts millions of visitors every year. Both offer beautiful surrounding landscapes with an abundance of artistic riches and natural splendor, although many travelers know Tuscany much better than they know Veneto, the region beyond the city on the lagoons that s stretches from the eastern shores of Lake Garda to the Adriatic and from the Austrian to the borders of Emilia Romagna. But that seems to be changing as visitors, whether regulars or first-timers, seek out less-traveled destinations, while Italy’s most popular places are teeming with travelers. From 2014 to 2019, the Veneto saw an increase of almost 46% in the number of visitors, explains Jasmine Tramarin of Lovivo Tour Experience, travel specialists who offer personalized individual and group trips in the region. “The Veneto has a lot in common with Tuscany in that [provide] a complete tourist offer that goes from the sea to the mountains, from cities of art to the beautiful countryside, and from lake destinations to spa areas, ”she says.

Joyce Falcone, founder of Italian Concierge, a company specializing in luxury travel to Italy, which has been included on Travel + Leisure ”s A-List since 2009, says it has seen an increase in travel to Veneto, but believes the region deserves even more inquiries. “This is an area for a sophisticated traveler who has seen cities of art and the Tuscan countryside and ticked the box for the Amalfi Coast.” Falcone points out that while visitors are obviously drawn to Florence for its Renaissance history and Rome for its ancient past, the Veneto offers many unique, although less well-known, cultural experiences that should not be missed. During the warmer months, she likes to suggest a circular route for travelers wishing to take advantage of the outdoor and artistic offer of the region that begins in Venice, moves to the Dolomites (for hiking, lunch musketi, or mountain huts), Bolzano (in South Tyrol), Lake Garda (for boating) and ends in Verona for a show at the famous Arena. Winter travelers and skiers can follow a similar route with some seasonal adaptations, she says.

Whatever your interests, the Veneto has a lot to offer. Here are seven reasons why you should consider this region when you head to Italy again.

All the wine routes. You can travel the Prosecco Wine Route, officially known as the Strada del Prosecco e Vini dei Colli Conegliano Valdobbiadene, which stretches 50 kilometers from Conegliano to Valdobbiadene, with a choice of vineyards to visit along the way. If you’re heading here in 2021, try the producers’ latest offering: Rosé Prosecco. To taste the red wines of Veneto, follow the Bardolino wine route near Lake Garda and to try Amarone at the source, visit the vineyards along the Strada del Vino Valpolicella in the countryside north of Verona. Joyce Falcone recommends a stop at Villa delle Torre Allegrini, known for its fine amarones. Fans of white wines can explore the Soave wine route, also around 50 kilometers long; a route starts in the town of Soave and follows a route dotted with castles. Another, although less well-known, wine route to explore is in the Euganean Hills, southwest of Padua, offering DOC red, white and sparkling wines. (LoVivo offers a number of wine tours in the region, including the Euganean Hills, and bike tours in the Prosecco and Valpolicella regions).

Discover the Renaissance from a Venetian perspective. Botticelli and Brunelleschi played in Florence; Michelangelo and Bramante glorified the Renaissance in Rome. In Venice and its surrounding territories, artists such as Titian, Tintoretto and Veronese (among others) put their stamp on the Renaissance, producing works renowned for their richness of color and employing a looser style of painting than contemporaries elsewhere in the Italian peninsula. Palladio, using design precepts associated with ancient Rome and Greece, redefined the architectural style with a series of extraordinary villas, palaces and churches. Many of his masterpieces are found in the Venetian countryside. Enjoy the work of Renaissance stars away from the crowds of Venice, making sure to see the Veronese frescoes at Villa Barbaro; works by Veronese, Tintoretto and other important artists of the time at the Museo Civico in Vicenza, and by Titian at the Scuola del Santo in Padua and in the Duomos of Verona and Treviso.

The Euganean Hills. A virgin territory southwest of Padua which for many travelers remains an “unknown” area of ​​Veneto, the Colli Euganei, as they are called in Italian, are one of the great destinations under Italy’s radar, offering in a microcosm much of what the Veneto has to offer, as well as the possibility of indulging in a journey of well-being. “The Euganean Hills are still an authentic region,” says Jasmine Tramarin. “It’s a niche place where you can discover the real Italy, a land of small producers and family cellars. Here, mass tourism and standardization do not exist. Tramarin says you’ll also find medieval castles, Venetian villas, walled towns and country villages nearby. In addition to wine tours along the Strada del Vino, there are plenty of opportunities to indulge in wellness experiences, with over 100 spa / thermal hotels in the area, whose therapeutic waters have attracted visitors. even before the Romans arrived. The Euganean Hills are also great for sport, with plenty of hiking, biking, and horseback riding trails and four golf courses, says Tramarin.

Great sports. In winter, skiers can head to Tony Cortina D’Ampezzo, who will co-host the 2026 Olympics with Milan. The resort is part of Dolomiti Superski with access to some 1,200 kilometers of slopes. There is also a lot of Nordic skiing in Asiago, with 500 kilometers of slopes. “Winter travelers should be aware of shoulder season in the mountains, when areas are quieter,” says Joyce Falcone. Sailors from all over the world are heading to Lake Garda (most of the eastern half of the lake is in Veneto), famous for its good wind conditions.

Beautiful towns and villages not overrun with tourists. You can still enjoy a feeling of discovery without feeling like you have stepped off the beaten track when you visit some of the charming towns of the Veneto. Among the places not to be missed: Asolo, designated one of the most beautiful villages in Italy, where the Queen of Cyprus, former Venetian nobleman, was exiled and established a court where the arts flourished. Villa Cipriani, a luxury hotel, is located here, and its charming garden is the perfect place to sip a Bellini and enjoy the countryside views in summer. Like Asolo, Arquà Petrarca, where the influential poet Petrarch lived, is on the list of the most beautiful villages. You can see his old house, built in the 13th century, which is now a museum. Head towards Este to admire the extraordinary altarpiece by Tiepolo in the Duomo of Santa Tecla. The city has long been known for its ceramic production.

Cities of art and culture. Padua, around a 40-minute drive from Venice, is home to one of the most important works of Western art: Giotto’s frescoes in the Scrovegni Chapel. Once here, plan to visit the historic Caffè Pedrocchi and Sotto il Salone, a culinary market with a history dating back 800 years, located in the Palazzo della Ragione. In Verona, after seeing Titian’s work in the Duomo, stop by Roman ruins, such as the famous Arena amphitheater and the imposing Porta Borsari, an ancient city gate. In Vicenza, a UNESCO World Heritage Site with the Palladian Villas of the Veneto, you can see some of Palladio’s urban works, such as the Palladiana Basilica and the Olympic Theater. There is also a Palladian museum. The Museo Civico at Palazzo Chiericati, also designed by Palladio, displays important works by painters, sculptors and other Venetian artists from the 14th to the 18th century. Joyce Falcone recommends other experiences like seeing Giorgione’s work in Castelfranco Veneto (his hometown), visiting the museum of the famous neoclassical sculptor Antonio Canova in Possogno and discovering Ladin culture in the north of Veneto.

Specialized tours of Venetian villas. The Veneto offers some of Italy’s largest rural estates, providing a particularly lavish outlook on villa living. “Keep in mind the Veneto region [has] more than 4,000 Venetian villas scattered throughout the provinces ”, explains Tramarin. One of the ways she recommends to see them is by taking a trip along the Brenta Riviera, between Padua and Venice. Here you will find a setting ‘filled with magnificent residences designed by the most important [architects] like Palladio and Scamozzi and surrounded by monumental gardens, ”she says. [Lovivo Tour Experiences offers an itinerary by boat or on land depending on the number of travelers.] And for a very special experience, Lovivo can also organize a stay in a Palladian villa.

Bebe Rexha puts on a spectacular display in a red corset...