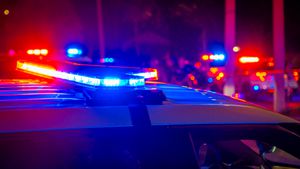 An 80-year-old man was arrested after officers from the Georgia Bureau of Investigation found child pornography at his home.

GBI agents said the investigation began after officers received a tip from the National Center for Missing and Exploited Children about possible online possession and distribution of child pornography.

He was booked in the Oglethorpe County Jail.

WH press secretary is scorched for clumsy explanation of spy flights in China: ‘What nonsense’