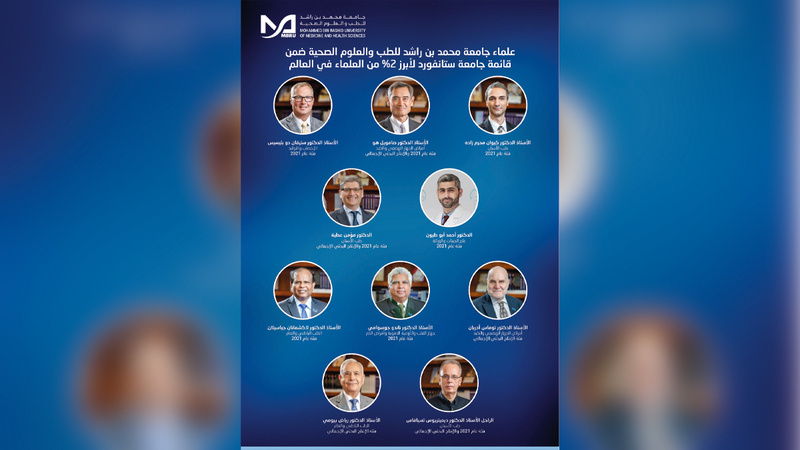 The Mohammed bin Rashid University of Medicine and Health Sciences revealed that nine members of its academic staff were included in the list of the most prominent 2% of scientists in the world by the American Stanford University, one of the most important research and higher education institutions in the world, in a new global testimony to the growing position of Dubai as a center Global for research and scientific excellence.

Dr. Amer Ahmed Sharif, Rector of the University and Executive Director of the Dubai Academic Health Foundation, said: “Stanford University is one of the leading research and educational institutions in the world, and the selection of nine of the university’s academic staff within this list of the most prominent scientific talents in the world is a milestone for the university, and an indication of the distinguished research efforts of the staff.” Academic. It also reflects the university’s excellence in research and its impact on promoting innovation and advancing healthcare, as the university has published about 1,000 peer-reviewed scientific research since its establishment in 2016.

ALSO READ  Mohammed bin Rashid: «COP28» is the most prominent event for the country .. and the UAE will organize the most successful global environmental conference

The Stanford report for the most prominent 2% of scientists in the world includes two lists of the most important scientists whose scientific publications received the highest number of citations in peer-reviewed scientific research. The first list focuses on evaluating the contributions of each researcher in his scientific field during the year 2021, and included seven members of the academic staff at the Mohammed Bin Rashid University of Medicine and Health Sciences, who are: Dr. Stephen du Plessis, in the field of fertility and obstetrics, and Dr. Samuel Ho, in the field of systemic diseases. Gastroenterology and Hepatology, Dr. Kiwan Moharramzadeh, Dr. Momen Attia in Dentistry, Dr. Ahmed Abutiyon in Genetics and Genetics, Dr. Lakshmanan Jayaselan in Internal and General Medicine, and Dr. Nandu Goswami in the Cardiovascular System and Hematology.

As for the second list, it focuses on the contributions of scientists in their scientific field over the course of their lives, and it included four members of the academic staff at the university, and they are Dr. Samuel Ho, and Dr. Thomas Adrian, in the field of diseases of the digestive system and liver, and Dr. Moamen Attia in dentistry, and Dr. Riyad Bayoumi in Internal and general medicine.

ALSO READ  The weather is clear to partly cloudy.. and humid at night

The late Prof. Dr. Dimitrios Tsiafas, who previously held the position of Professor of Endodontics at the Hamdan Bin Mohammed College of Dentistry from 2016 to 2019, was also mentioned in the two lists, where he was classified in the sub-field of dentistry.