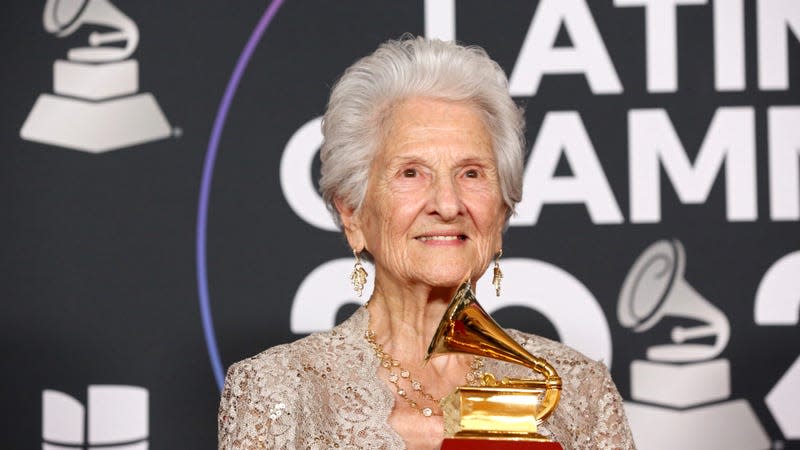 It’s never too late in life to chase a dream or pick up a new hobby – Angela Álvarez, a 95-year-old Cuban singer-songwriter who only started performing at her older age, proves that. But last night, Álvarez also proved that it’s never too late to pick up one of the most esteemed accolades for an emerging Latin musician: a Latin Grammy for Best New Artist.

In one of the most exciting coronations of last night’s ceremony at Mandalay Bay in Las Vegas, Álvarez won the Best New Artist award. In yet another twist, Álvarez shared the title with Mexican musician Silvana Estrada, a rare tie. Upon accepting the awards, Álvarez had already made Latin Grammy history as the oldest Best New Artist nominee. Now she is also the oldest winner.

Álvarez’s incredible life, a testament to her dedication and lifelong dreams, was chronicled in the recent documentary Miss Angela. Álvarez was forbidden by her family to become a singer in her youth, but Álvarez settled into married life and started a family. During the Cuban Revolution, she sent her children to the United States as part of Operation Peter Pan, and did not see them for many years. Finally, as an older woman, she was given the long-awaited opportunity to write and perform music. In 2021, she released her self-titled debut album.

“For those who have yet to fulfill their dreams, know that even though life is hard, there is always a way out,” Álvarez shared during her acceptance speech. “And with faith and love, anything can be achieved.”

Angela Alvarez, the persona who saw a Latin GRAMMY a long time ago

Other big winners of the night are Rosalía, who took home Album of the Year for her third album Motomami, and Bad Bunny. Although he did not attend the ceremony, Bad Bunny won five awards for his album Un Verano Sin Tiwhich is also nominated for Album of the Year at the Grammys this year.

More from The AV Club