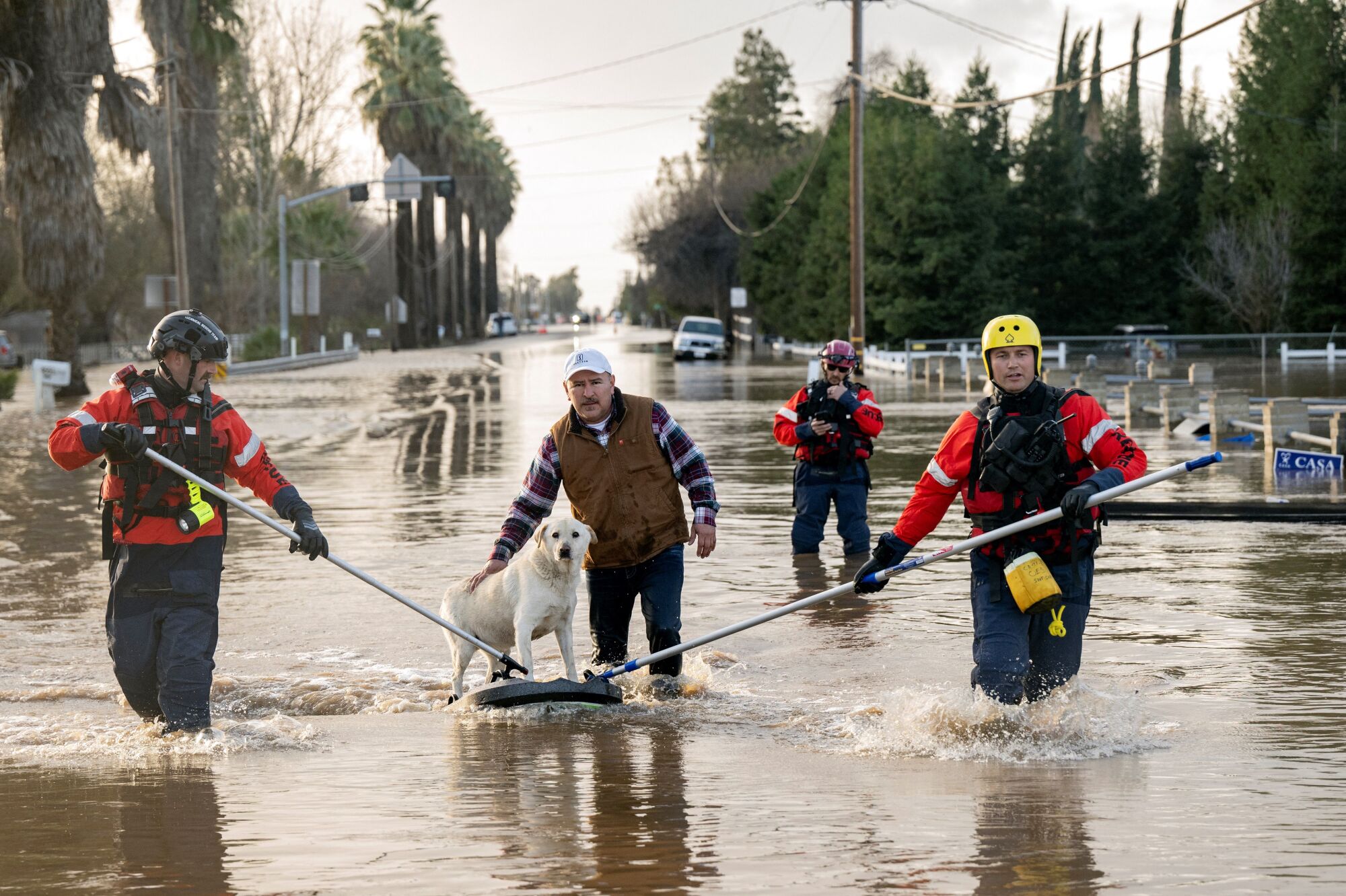 The woman clung to a tree in pitch darkness. Nearby, her gray pickup was submerged in murky brown water.

She was trapped along a fair weather bridge, a causeway over Coyote Creek just north of Ventura. The stream had overflowed and flooded the crossing after a powerful storm swept into the area on Monday.

About 100 feet away, voices sounded above the rushing water. Hold on tightthey told her. A rescue swimmer arrives.

The task of getting the stranded, soaking wet woman to safety fell to the Ventura County Fire Department’s rapid water rescue team. Their tools, rope and a canoe.

Across the state, rescue teams like Ventura’s have come to the aid of people stranded in flooded neighborhoods and trapped in cars following a series of winter storms that have battered California in recent weeks.

While hundreds of people have been rescued, there have been at least 19 deaths from storms in California. Earlier this week, Governor Gavin Newsom said the storms have claimed “more lives than wildfires in the past two years combined.”

In the summer and fall — and increasingly year-round — firefighters fight the wildfires that ravage this drought-stricken state. If winter and spring are as wet as California is right now, they’re up against the flood.

Anyway, they fight against nature.

While the team waited to deploy, the six members practiced rescue scenarios on the American River. Then, around 2:30 a.m. on January 9, they got a call: Go to Merced.

Rescuers wore red and black dry suits, life jackets, boots, helmets and gloves. They dragged their boat alongside them while knocking on doors and offering residents a chance to leave. In some cases, residents stood nearly 2 feet of water in their homes. They packed shopping bags, duffel bags, and backpacks and brought their cats, birds, and dogs.

“Everyone was very polite, very quick and very grateful to have the chance to get out and get on dry land,” said Jason Kingsley, the team leader at the rescue.

As they navigated the streets, Kingsley said, they saw cars partially floating and others moving through the rushing water and collecting in the shallows.

At one point, they encountered a woman who had accidentally driven over a flooded road and got stuck. The water was about halfway up the window of her car. The team managed to pull her out through the sunroof, slide her over the hood of the car and get her into the boat – all without getting her wet.

The team evacuated about 50 people that day.

“We train for this kind of thing, but training and actually doing it is very different,” said Benjamin Henggeler, fire chief and task force leader. “It forces you to use all your skills from everything you’ve learned and prepared for.”

Among dozens of teams deployed across the state during the recent storms was the CAL OES Oakland Fire Department Rapid Water Rescue Team 4. On Tuesday, the team — which included Oakland firefighters and outside agencies — reconnoitered Salinas, Gilroy and Hollister and visited local fire stations to alert them that they were in the area.

Just after 10 p.m., they received a call that two men were trapped on the roof of a truck in the San Benito River. The water had reached the windows.

The team came up with a plan to use the Hollister Fire Department’s ladders and create a bridge over the water. They tilted a 24-foot extension ladder from shore to a small island in the water and crawled over the rungs.

It was Geoff Gray’s first time crossing the water on a ladder. He estimated that the water below him was flowing at 20 mph.

“You’re only inches from the water because the water rushes by quickly,” said Gray, a captain/paramedic with the Alameda Fire Department and a member of the team. “You just start doing what you know, even if it’s a little different from what you’ve done before.”

Cassie Kays, a rescue specialist on the team, likened the experience to climbing a ladder at a carnival. As the Oakland firefighter crossed the river, she carried a second ladder to reach from the island to the hood of the truck. At the end of the ladder, the team had attached life jackets for the men to use in case something went wrong.

Gray then crossed over to the truck and led the men as they crawled over the ladder to the patch of land. From there Kays led them up the next ladder to the bank.

“I was relieved for them that we got them off safely. I was excited that we had a pretty successful mission,” Kays said. “I felt like it went pretty fast and smooth.”

The two men, who were unharmed, were later arrested for trespassing, according to the San Benito County Sheriff’s Office. The 21-year-old and 25-year-old were in a restricted area.

“I think they drove there to go off road, just to see if they could cross the river, and they didn’t know the river levels were so high and the water was so fast,” Cmdr said. Silvestre Yerena, from the sheriff.

In Southern California, the Ventura County Fire Department deployed two rapid water teams of six members each to respond to incidents across the county. The Oxnard Fire Department also deployed a team.

During the storm that began Jan. 9, the Ventura County Fire Department responded to 22 rapid water calls and rescued more than 80 people.

That included more than a dozen people rescued from the Ventura River. Firefighters used a 10-meter ladder to help people climb onto a bridge.

“We haven’t had any rapid water problems in the last three or four years or anything as serious as we’ve had in the last few days,” said Captain Tom Lanski of the Ventura County Fire Department’s rapid water rescue team. “We just didn’t have any rain, our rivers were pretty dry. There was simply no water flowing anywhere in Southern California.”

On Monday, the team answered calls from about noon to 2 a.m., Lanski said. The teams “were non-stop, it was just go, go, go.”

That night, Lanski’s team learned that a woman had become trapped on Camp Chaffee Road.

As the team tried to navigate to her, mudslides forced them to abandon their boats. They encountered mud that was five feet deep and stretched 100 feet across the road.

“That was actually pretty scary, because we were going into an area where there was a lot of sliding,” Lanski said. “You can’t see the hill, so you just don’t know if you’re going to be swept off the side at any moment.”

When they reached the stranded woman, it was 9 or 10 p.m. and her truck was submerged by about 7 feet.

Jeff Whitehouse – dressed in a neon green and black dry suit and life jacket – was tasked with swimming nearly 100 feet to reach her. His team had hooked a rope to his vest to pull him back if he got into trouble.

Whitehouse could not see the woman through the pouring rain and darkness. He made his way through the current, in water colder than 40 degrees, and at one point collided with a tree trunk washed upstream.

As he swam, he reached a palm tree and used it to pull himself towards the truck. He called out to the woman, then saw her wedged into the fork of a tree, holding on tight to the branches. He asked if she was okay. She told him she was cold and wet.

“She was absolutely happy to see me,” he said.

Whitehouse hurried to help her put on a life jacket. The water rose and time was of the essence.

The team used a canoe that had washed up nearby to get the woman to safety. Once she and Whitehouse were aboard, a retrieval team helped escort the craft.

Once they reached land, they made sure the woman didn’t need medical attention. Then they loaded her into a vehicle, turned on the heat, and took her out of there.

“We were just fighting the weather,” Whitehouse recalled. “Visibility was probably the biggest challenge, just trying to locate her. We made it work.”

That same night, the county’s other rapid water rescue team rescued four people from a car stuck in the middle of a creek. The team placed a 13-foot ladder over raging water and on the corner of the vehicle’s hood.

As more storms are predicted in the coming days, the teams were redeployed Friday evening. They would be ready for any rapid water that broke out.

And they were ready to start all over again.