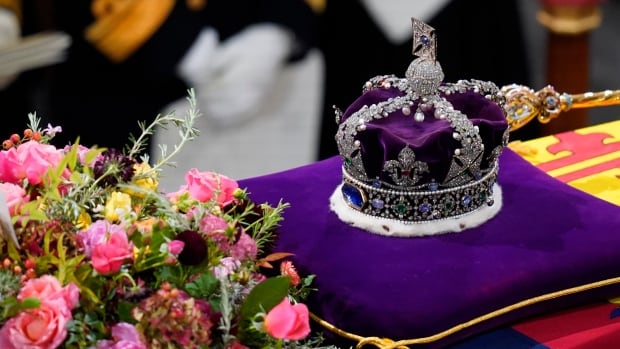 Flowers chosen by the king. Some of the most legendary objects in the royal family. And a crown with nearly 3,000 diamonds. These are some of the items that lay atop Queen Elizabeth’s coffin when the world saw her funeral at Westminster Abbey in London on Monday.

Here’s a closer look at each of the items on top (and below) today’s chest:

Monday morning the coffin was state weapon wagondrawn by 142 Royal Navy service personnel to the nearby abbey past crowds of mourners along the route.

The flag draped on the coffin is the Royal Standard, which represents both the sovereign and the United Kingdom. It is flown outside palaces when the sovereign is at home and on official travels in the sovereign’s car. When the Union Jack flew over Buckingham Palace, it meant the Queen was not there.

The flag has four quarters: two with lions representing England, a lion for Scotland and a harp for Ireland. (Wales is not represented.)

The crown on top of the velvet cushion is the Imperial State Crown, which is inlaid with 2,868 diamonds, 269 pearls, 17 sapphires, 11 emeralds and four rubies. It was first worn by the Queen when she left Westminster Abbey on the day of her coronation in 1953. It was originally made for the coronation of her father, King George VI, in 1937.

The scepter and orb on the chest, like the crown, are among the most famous parts of the Crown Jewels, which includes more than 100 objects and 23,000 precious stones. Both were present at the Queen’s coronation.

The Sovereign Scepter has been used at every coronation since Charles II in 1661. It is intended to represent the power of the Crown and includes the Cullinan I diamond, the largest colorless cut diamond in the world.

The Sovereign Orbmeanwhile, is meant to indicate that the power of the monarchy comes from God.

Before the final hymn at the ceremony, the Imperial state crown, orb and scepter were removed from the coffin and placed on the altar in St. George’s Chapel in Windsor Castle.

The wreath of flowers, in gold, pink and deep burgundy, with accents of white, including flowers and foliage cut from the gardens of Buckingham Palace and Clarence House at the request of King Charles.

They include rosemary as a memorial and myrtle cut from a plant grown in 1947 from a sprig of myrtle in the Queen’s bridal bouquet.

The wreath also contained a handwritten note That read, “In loving and devoted memory,” and was signed Charles R – for Rex, or king.