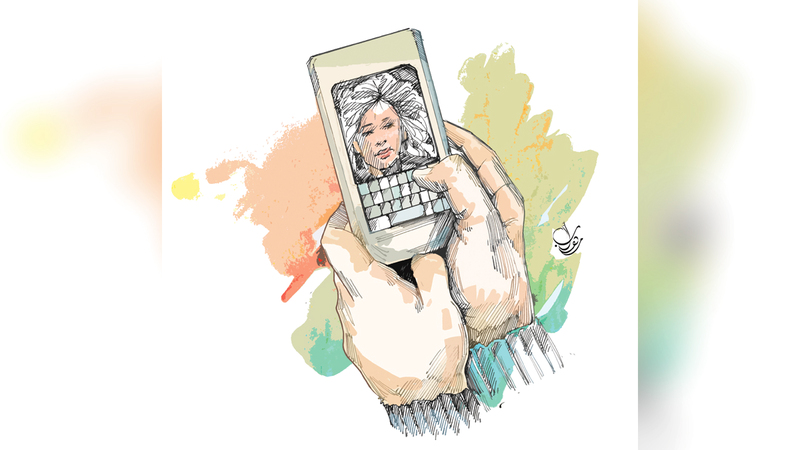 A young (Arab) took advantage of private photos of an (Arab) girl to defame her in front of her colleagues and annoy her by calling her at 3:30 in the morning. Accordingly, the Public Prosecution Office in Ras Al Khaimah referred the defendant to the Court of First Instance, which ruled that he be fined 7000 dirhams for the two charges of intentionally causing annoyance to the victim by using Communications devices, and the misuse of communication services to hurt her feelings, and the verdict has become final because it is not appealed.

The lawsuit papers added that due to the material damage suffered by the plaintiff, represented in her incurring 15,000 dirhams as attorney’s fees, and what the defendant committed against her and a deduction from her salary for leaving her work because of his pursuit and defamation of her in front of her colleagues, and the moral harm she suffered for causing her annoyance, promoting lies and harming her honor. Taking advantage of some of her photos on an occasion with one of her friends, she is demanding a ruling for her to oblige him to pay her 20,000 dirhams in compensation for the moral and material damage she suffered. The defendant denied contacting the plaintiff and requested consideration of his financial circumstances, as he was dismissed from his job.

And it was stated in the rationale for the partial civil court ruling in Ras Al Khaimah, that as long as the criminal ruling is the basis for the case, it has become final, and it is a ruling that decided the defendant’s mistake of disturbing the plaintiff, so it has acquired an argument that the civil court adheres to, as it is a ruling on the common basis act between the criminal and civil cases. Its legal description and attribution to the defendant, therefore, elements of tort liability were available from a harmful act, which is disturbing the defendant and misusing telecommunications devices and services to hurt the plaintiff’s feelings.

She indicated that the plaintiff suffered material and moral damage, and the court had no choice but to implement its discretionary power in estimating the compensation due for the material and moral harm that befell her, as it was proven that the defendant caused the plaintiff expenses that were indispensable for her in an effort to file a complaint against him and assign a lawyer to defend her in criminal cases. And the civil, in addition to her copying the criminal case papers, and accordingly the court considers that the plaintiff’s request to compensate her for the material damage she suffered on the way and estimates it at a value of 4000 dirhams.

She added that with regard to moral compensation, it is indisputable that the defendant’s phone call to the plaintiff late at night, 3:30 in the morning, generates a feeling of fear and disturbance in her, with what the court sees as proof of the moral damage she suffered, which is damage that arose directly from the crime, and the court estimates the compensation due at a value of 3,000 dirhams. Accordingly, the court orders the defendant to pay the plaintiff 7,000 dirhams in compensation for the material and moral damage she suffered, along with the legal interest of 6% from the date of the judgment until the completion of payment, and obliged him to pay fees, expenses, and attorney’s fees.

ALSO READ  A young man borrows his friend's car.. He destroys it and runs away

• The court fined the young man 7,000 dirhams in compensation for the material and moral harm she suffered.

Drivers’ obstinacy over the priority of traffic ends in traffic accidents