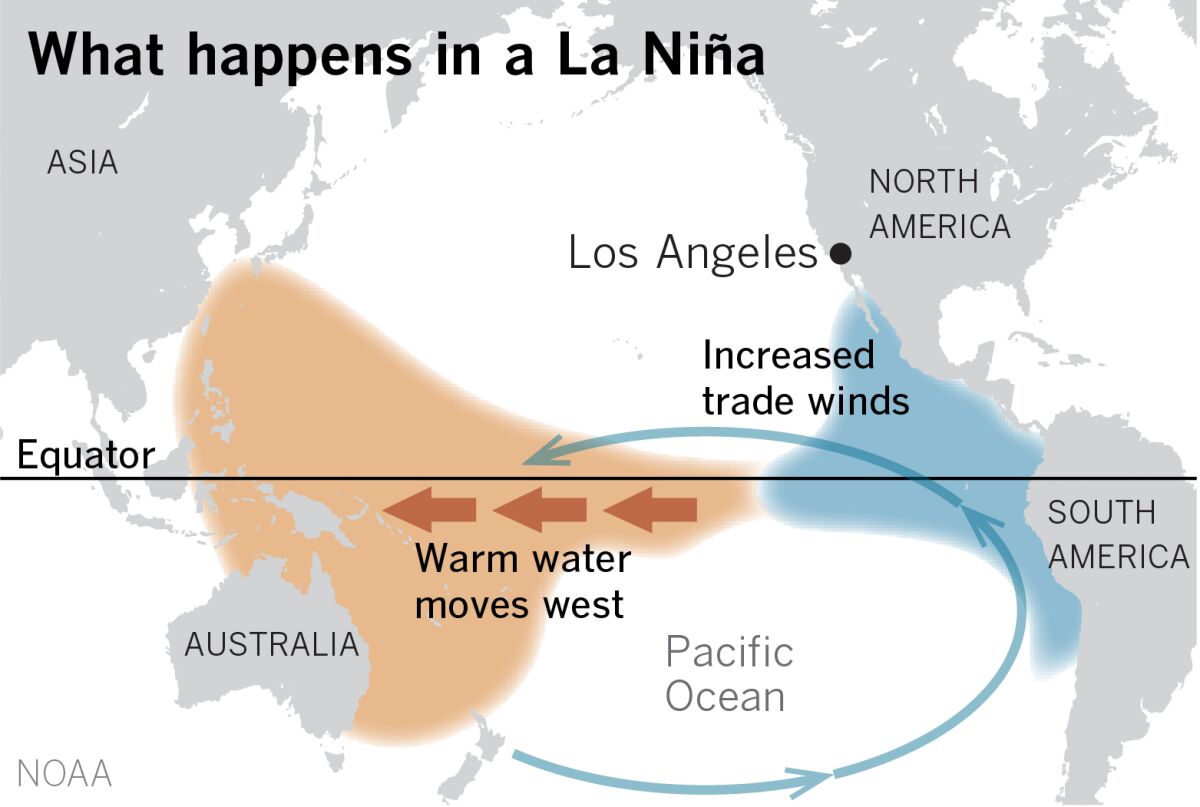 Californians should brace themselves for another year of La Niña, as the persistent tropical Pacific climate pattern is expected to continue for the third straight year, forecasters say.

The latest forecast, published Thursday by the National Weather Service’s Climate Prediction Center, has raised the odds of La Niña sticking to 91% through November, a near certainty. The pattern can also persist into winter, with an 80% chance of La Niña from November to January and a 54% chance from January to March.

La Niña is the cooler phase of the El Niño-Southern Oscillation climate pattern and is a major driver of weather conditions around the world, including temperature, rainfall and snowfall, jet streams, and tropical cyclones.

In the southwestern United States, La Niña’s seasons tend to be drier, which can pose problems for the drought-stricken region.

“It doesn’t mean it will be 100% dry for sure, but it does increase the chance of dryness,” said Mike Halpert, deputy director of the Climate Prediction Center. “If you’d been wet for a while it wouldn’t be drier than average, but this year it’s going to be very important because of the drought that’s already there. Another dry winter certainly won’t be good news for California.”

ALSO READ  3-year-old among 2 killed in Chicago shootings; 12 others injured

According to The Times’ drought tracker, more than 97% of the state is now experiencing severe, extreme or exceptional drought, the three worst categories. The state’s reservoirs have a capacity of about 41%.

If the prophecy materializes, it would be only the third time La Niña has survived for three consecutive years since the records began in the early 1950s, Halpert said. The only other such “triple dips” were from 1973 to 1976 and from 1998 to 2001.

The outlook mirrors that of the World Meteorological Organization, which is also forecasting another La Niña this year. That forecast includes a 70% chance that La Niña will continue in September to November, gradually decreasing to 55% in December to February.

“It’s exceptional to have a La Niña event for three consecutive years,” WMO Secretary General Petteri Taalas said in a post about the forecast, noting it would be the “first triple dip La Niña of the century.” .

The effects of the pattern are not limited to the Southwest. La Niñas are known to result in wetter, snowier conditions in parts of the northern US, more frequent tornadoes in the southern US, and increased activity in the Atlantic hurricane season.

Globally, La Niña may reduce crop yields in the Horn of Africa, Southeastern South America and other regions, as well as produce colder, drier conditions in West Antarctica.

On the west coast of the US, La Niña can also reduce the number of atmospheric rivers, which can be of concern in California, which receives a lot of precipitation in the winter. A dry season this year forced officials to cut the State Water Project’s allocations to just 5%.

Halpert said the relationship between human-caused climate change and La Niña remains a topic of interest.

“La Niña and El Niño have been around for hundreds, thousands of years, we think, so it’s not like climate change is manifesting itself in the actual phenomena,” he said. “A more pertinent question is whether climate change changes the frequency of the two events, and to be fair, that’s still an open research question.”

According to the WMO, climate change is already amplifying the effects of some naturally occurring events such as La Niña.

Last fall, dry conditions in particular contributed to the spread of multiple California wildfires in September and October, including the Windy Fire and KNP Complex fires, which destroyed some old-growth redwoods.

And while La Niña has only a minor impact on temperatures in Southern California, a separate climate forecast from the Climate Prediction Center shows that much of the US is more likely to experience above-normal temperatures through November.

California has about a 33% to 50% chance of being warmer than average, the forecast shows. While it doesn’t include temperature forecasts for December and next year, a warm La Niña winter could affect the timing and availability of water in the state, as warmer temperatures can cause more precipitation to fall as rain rather than snow.

“We get a lot of questions: If you’re in a drought and we predict dry conditions, what do you do?” said Halpert. ‘There isn’t much. There are water restrictions – and basically the old mantra of ‘hope for the best, but prepare for the worst’.”