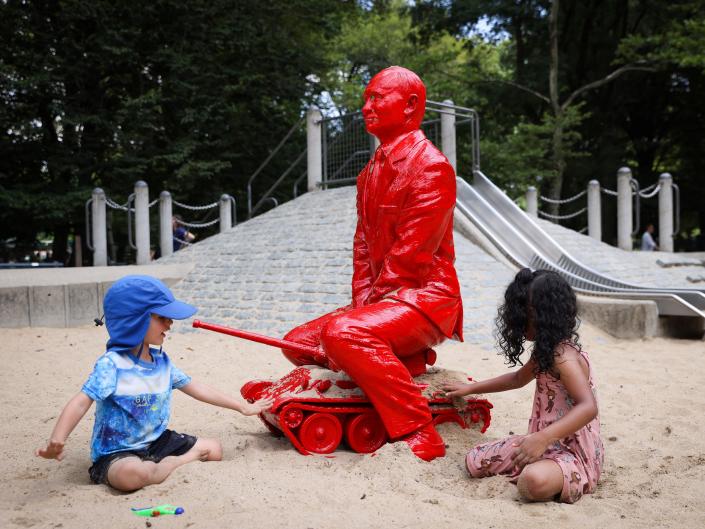 Russian President Vladimir Putin was spotted this week on a small tank in New York’s Central Park and was quickly overrun by children – or at least a statue of him was.

The sculpture of Putin was created by French artist James Colomina and placed in a playground in Manhattan park, according to the artist’s Instagram.

The bright red sculpture shows the Russian leader sitting atop a miniature military tank in an almost childlike squat.

“This sculpture aims to expose the absurdity of war and to emphasize the courage of children when faced with violent, catastrophic situations caused by others,” Colomina wrote alongside photos of his work.

The artist is known for bright red sculptures that often pop up unannounced in public places. Additional photos show identical sculptures of Putin in Paris and Spain.

Photos of the New York sculpture showed children quickly hugging their new playmate by covering him with sand and pointing their water guns at him.

The Manhattan installation comes nearly six months since Russia launched an unprovoked invasion of Ukraine and as fighting continues, especially in the eastern part of the country.

It’s unclear whether the sculptures have been brought to the attention of Putin, who goes to great lengths to create a public perception of himself as strong and masculine: the Russian leader’s famous photo shoots showed him shirtless on horseback and posing majestically in the open air.