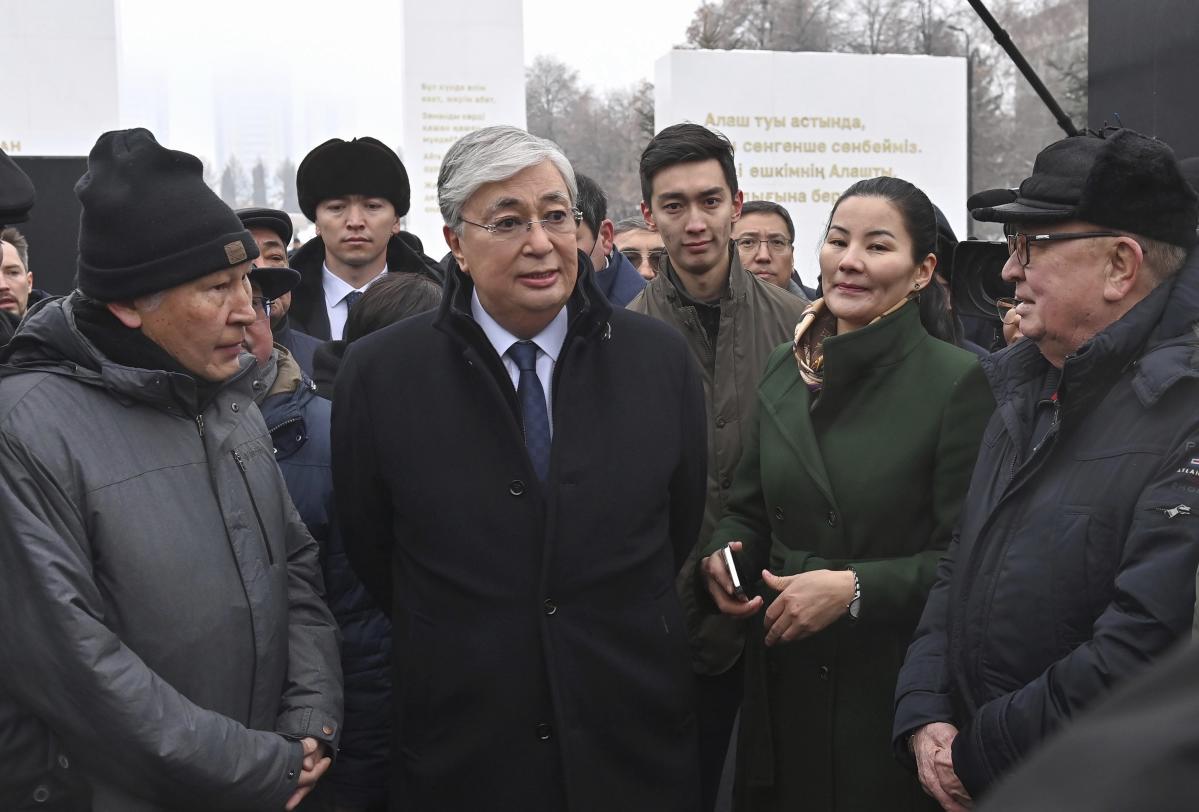 Wisps of fog hung over central Almaty, Kazakhstan, last month as President Kassym-Jomart Tokayev gloomily unveiled a monument to those killed a year ago during the worst unrest in the Central Asian nation’s three decades of independence.

Words on the stark concrete ‘Reverence’ monument speak of the need for unity and harmony in the energy-rich country of 19 million.

But a year after calm was restored and the state of emergency was lifted on January 20, 2022, both seem elusive. And an official fog still shrouds many of the events surrounding the days known as “Bloody January.”

Despite government promises of accountability and promises of economic and political reform in the former Soviet nation, many Kazakhs say they have not seen meaningful changes or even clarity about what happened to those who were killed and detained during the riots.

“So many questions remain about what happened,” said Dimash Alzhanov, a Kazakh political analyst and co-founder of the civil society movement known as Oyan, Qazaqstan, or “Wake up, Kazakhstan.”

A government video of the December 23 unveiling of the monument in Republic Square, attended by about two dozen officials, showed a subdued ceremony. Eleven months earlier, the scene was very different, when protesters stormed and set fire to two palatial state buildings on January 5.

The demonstrations began on January 2 in the oil-producing region of West Kazakhstan over a rise in state-controlled gas prices at the dawn of 2022. Those protests spread and turned into widespread criticism of corruption, economic inequality and a continued grip on the power and energy wealth of the country by the long-serving first leader, Nursultan Nazarbayev, and his family. Protesters referred to him by yelling, “Old man out!”

Over the course of a week, the initially peaceful gatherings turned violent. Participants in the marches told The The Bharat Express News at the time that gunmen, covering their faces and driving cars without license plates, appeared in Almaty, the former capital, urging them to storm government buildings and promise weapons.

At Tokayev’s request, 2,000 mostly Russian peacekeepers were sent by the Collective Security Treaty Organization, a military alliance of six former Soviet states. This led to fears of an intervention by Moscow – weeks before the February 24 invasion of Ukraine. Those fears never materialized when the CSTO withdrew in late January.

It did, however, implement reforms, including strengthening parliament, reducing presidential powers and limiting the presidency to a single seven-year term. Tokayev, who succeeded Nazarbayev in 2019, won a snap presidential election in November with a reported 81% of the vote, which will keep him in office until 2029.

The reforms also stripped 82-year-old Nazarbayev of his remaining powers over domestic and foreign policy. In September, the country’s capital was renamed Astana, after being renamed Nur-Sultan in his honor in 2019.

“We still live in a Soviet-style authoritarian regime, and it hasn’t changed much since the January events,” Yevgeniy Zhovtis, head of the Kazakhstan International Bureau for Human Rights and Rule of Law, told the TBEN. “In fact, the events in January have led to new problems related to torture and civilian deaths and the completion of related investigations.”

Kazakh human rights lawyer Tatiana Chernobil, who works with the non-governmental organization Coalition Against Torture, said that while her group received 190 complaints of torture and ill-treatment in 2022, the real number could be much higher.

She said 104 of the cases brought by her organization were dismissed for lack of evidence. Kazakhstan’s ombudswoman, Elvira Azimova, gave a similar figure in November, with state media citing her that about 80% were dismissed before going to court.

In February, the president’s press office said criminal investigations had been launched into 170 cases of torture and abuse of power related to the unrest. In October, Deputy Prosecutor General Aset Chindaliyev said 17 police officers and 12 security officers were involved in criminal cases related to the alleged torture of detained protesters.

Chernobil said authorities are not doing enough to verify the allegations, noting that many people claim they can identify their torturers and have medical records of injuries. Investigators “often stopped at questioning the suspects, who claim they committed no wrongdoing — and that’s it,” and then conclude that the account cannot be verified, she said.

According to the United Nations, the burden of proof in torture cases lies with the state. As long as complainants can prove that there has been bodily harm or have been taken into custody, it is up to the authorities to prove that no torture took place.

“In Kazakhstan, we see a lack of compliance with international standards. We see a kind of victimization, where the burden of proof is placed on those who make the accusations,” Chernobil said.

Rachel Gasowski, a Central Asia researcher with the International Partnership for Human Rights, said allegations of torture in Kazakhstan date back to before 2022. Cases cited after protests in the oil-producing city of Zhanaozen in 2011 resulted in neither investigation nor compensation for victims , despite recommendations from UN-linked rights bodies. A joint report by Kazakh and international groups on torture will be published this month.

Gasowski said her group was “appalled” that most cases from the 2022 protests have been closed.

Chernobil expressed cautious optimism about a government decision to transfer jurisdiction in torture cases from the police and the National Anti-Corruption Service to the Attorney General’s Office, but it is not certain whether this will really change things. Her group has stopped demanding an independent investigative body, she said, “because it’s a big question to what extent you can really be independent in Kazakhstan.”

Zhovtis, the activist, said an international investigation is needed because most criminal investigations into civilian deaths have been dismissed because authorities often withhold important evidence, such as CCTV video, citing national security concerns.

The government’s list of the dead often fails to mention whether they were accidental deaths, such as from excessive force, or “genuine terrorists,” Zhovtis said, referring to the government’s line of foreigners behind the unrest. such evidence.

An official from the Prosecutor General’s Office told Kazakhstanskaya Pravda in February that authorities were investigating the deaths of at least six people in custody as a result of “prohibited interrogation methods”.

Some senior officials were accused of involvement in the unrest. Former counter-terrorism chief Karim Masimov, described as an ally of Nazarbayev, was detained along with other key security figures in January 2022 and charged with high treason in an ongoing closed-door trial.

Tokayev often speaks of a “new Kazakhstan” breaking with the Nazarbayev era, one of accountability and democratization. But Zhovtis sees limits to these promises.

On Saturday, journalist Dinara Yegeubayeva, who plans to run in the March 19 parliamentary elections, posted pictures of her burnt-out car in Almaty.

“Tokayev! Explain! Is this your new Kazakhstan?” she said. According to media reports, Yegeubayeva received bomb threats last year, although aid workers found no evidence of a bomb threat in her car. A criminal investigation has been opened.

Zhovtis linked the attack to what he called an official reluctance to allow genuine political opposition.

Alzhanov, the analyst, said candidates are having difficulty registering and collecting signatures from supporters.

He accuses Tokayev’s government of “imitational reforms” in favor of the West. He cited the case of opposition figure Zhanbolat Mamai, accused of organizing mass riots and spreading false information during the 2022 protests. He faces up to 10 years in prison on charges he calls politically motivated.

Despite the challenges, Zhovtis remained optimistic.

“Society is different now. The events in January and their coverage on social media have played their part, and society has become more open – there is more information and more criticism of the authorities,” he told the TBEN.

He also hopes that some opposition and independent candidates can be elected. The authorities allow 30% of parliamentary seats to be allocated from outside party lists.

“Something is happening. Very slowly, and the regime remains pretty much the same, but change is happening,” he said.

In Iowa, potential 2024 GOP Trump challengers are silent for now