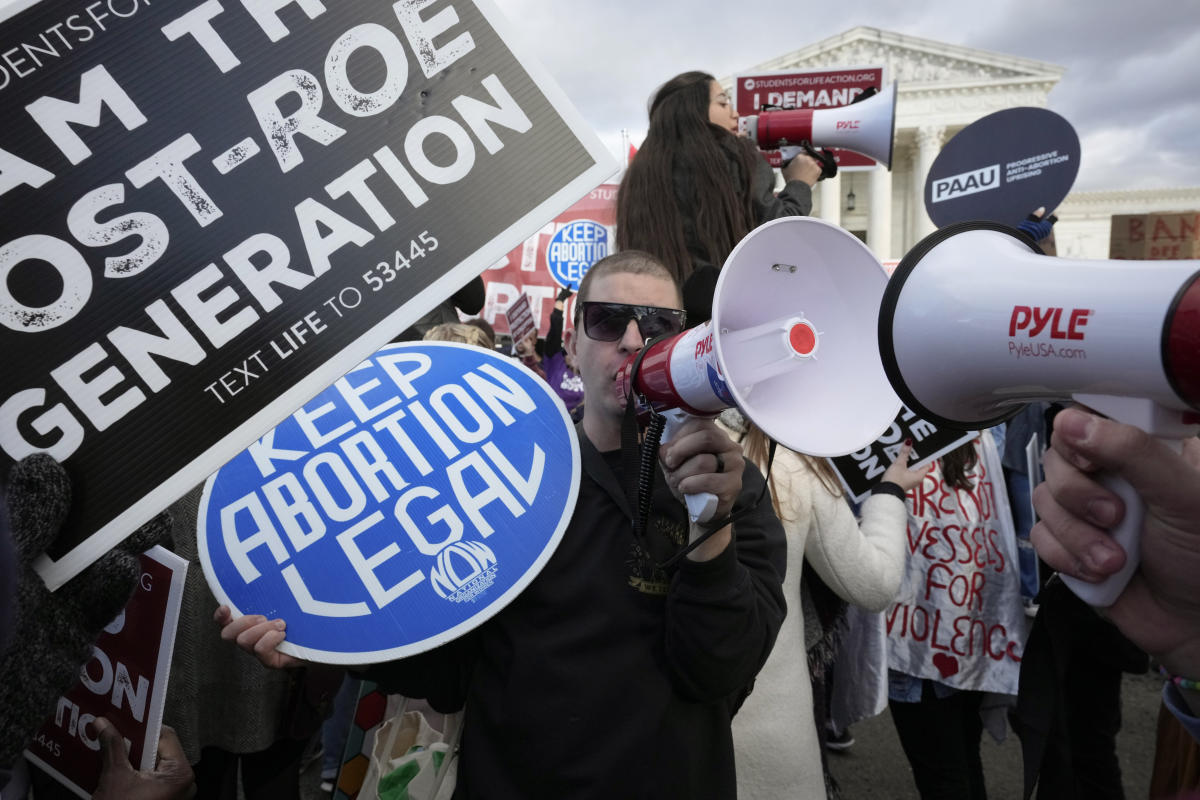 WASHINGTON (TBEN) — Before running for Senate, Democrat Tina Smith volunteered at a Planned Parenthood clinic in her home state of Minnesota, where protesters confronted women as they entered.

The experience is in her mind this Sunday, the 50th anniversary of Roe v. Wade, the Supreme Court decision that guaranteed a nationwide right to abortion until it was overturned last year.

“It feels like such an empty day,” she said.

The White House this weekend is trying to replace that sense of emptiness with outrage and determination by demonstrating determination to restore abortion rights, even as there is little chance of progress in Washington.

Vice President Kamala Harris is leading the effort with a speech in Florida, where Democrats fear a renewed push to restrict abortion by Republican Gov. Ron DeSantis.

The decision for Harris to speak in the state’s capital, Tallahassee, reflects how the battle lines have shifted since last summer. With no national law on abortion, debates on the issue will take place in individual state houses rather than in the halls of Congress or the Supreme Court. White House officials last week convened top lawmakers from eight states to discuss pending legislation.

In addition, after outperforming expectations in November’s election, Democrats see abortion as a major issue for their party in 2024, when control of the White House and both chambers of Congress are up for grabs simultaneously. DeSantis may seek the Republican presidential nomination, the first step in challenging President Joe Biden as he prepares to run for re-election.

White House press secretary Karine Jean-Pierre said Florida is critical because its abortion rules are less restrictive than neighboring states, making it a relatively safe haven for women in the region trying to terminate their pregnancy. to end. But the Republican-controlled state government could consider more restrictions.

DeSantis’ office did not respond to a request for comment.

Biden said in a statement on Sunday that “women should be able to make these very personal decisions without political interference. Yet Republicans in Congress and across the country continue to push for a national ban on abortion, criminalizing doctors and nurses, and making birth control more difficult. It is dangerous, extreme and unattainable.”

Celinda Lake, a Democratic pollster who has worked with Biden, said the White House strategy on abortion had three goals.

“You can create an atmosphere and pressure these states to make it more difficult to break draconian restrictions,” she said. In addition, Lake said, “You can set the contrast for 2024” and “you can use this as a major driver for people to vote.”

Democrats have concluded that the Supreme Court’s decision to overturn Roe v. Wade changed the political landscape ahead of last year’s election, rejuvenating the party’s chances when analysts had expected a wipeout of Republicans.

The Democrats still lost control of the House and increased their Senate majority by just one vote, meaning legislation that would create a nationwide right to abortion remains out of reach.

There are concerns that Biden and his administration have exhausted their options for executive action.

The Food and Drug Administration announced this month that abortion pills will become more widely available at pharmacies and through the mail. The pills can also be obtained through a virtual appointment, rather than visiting a doctor’s office.

A legal battle is now underway in Texas federal court, where abortion opponents have sued to overturn the drugs’ decades-old approval.

“The administration is really looking at existing federal law and trying to leverage it,” said Lawrence Gostin, who directs the O’Neill Institute for National and Global Health at Georgetown Law.

Not all of the administration’s ideas have materialized. Biden announced last year that states could apply for waivers to use Medicaid dollars to pay for women who travel to get abortions. No waivers have been requested.

Health and Human Services Secretary Xavier Becerra declined to say why he thinks states have not taken up the government’s offer.

“I’ll let you talk to the different states,” he said Thursday. “We’ve made the offer there and we continue to challenge people to find ways to make sure no one loses access to health care.”

Becerra was in Minnesota, where Democratic leaders were finalizing legislation to codify abortion rights into state law.

“We will continue to work with states like Minnesota that want to do the things necessary to enshrine in our laws the protections that will forever prevent Americans from losing access to health care,” Becerra said at an event with the Democratic Gov. Tim Walz and lawmakers.

ALSO READ  New poll 2024: Trump way ahead of DeSantis, but poll has good news for both

In several states, the battle to protect access to abortion is playing out in courtrooms, with lawsuits against abortion restrictions active in 14 states, according to an analysis by the Kaiser Family Foundation.

The nonprofit health organization found that advocates have generally taken one of three approaches to address legal challenges to abortion laws by claiming that the laws violate state constitutional protections, infringe on some states’ guaranteed rights to making health care choices, or blocking religious freedoms.

It’s unclear which legal arguments could be most successful, with the states’ highest courts ultimately deciding how accessible abortion will be. Meanwhile, abortion opponents are looking for ways to use the courts to further restrict abortion.

Renee Bracey Sherman, founder and executive director of the group We Testify, which advocates for women who have had abortions, said she was disappointed Biden did not do more.

“The fact that he is missing during this public health emergency is truly embarrassing,” she said.

Biden never did, but Smith said he’s pleased with the steps he’s taken.

“It would be hard to point to something that they haven’t done that they might have done with a public health emergency,” she said.