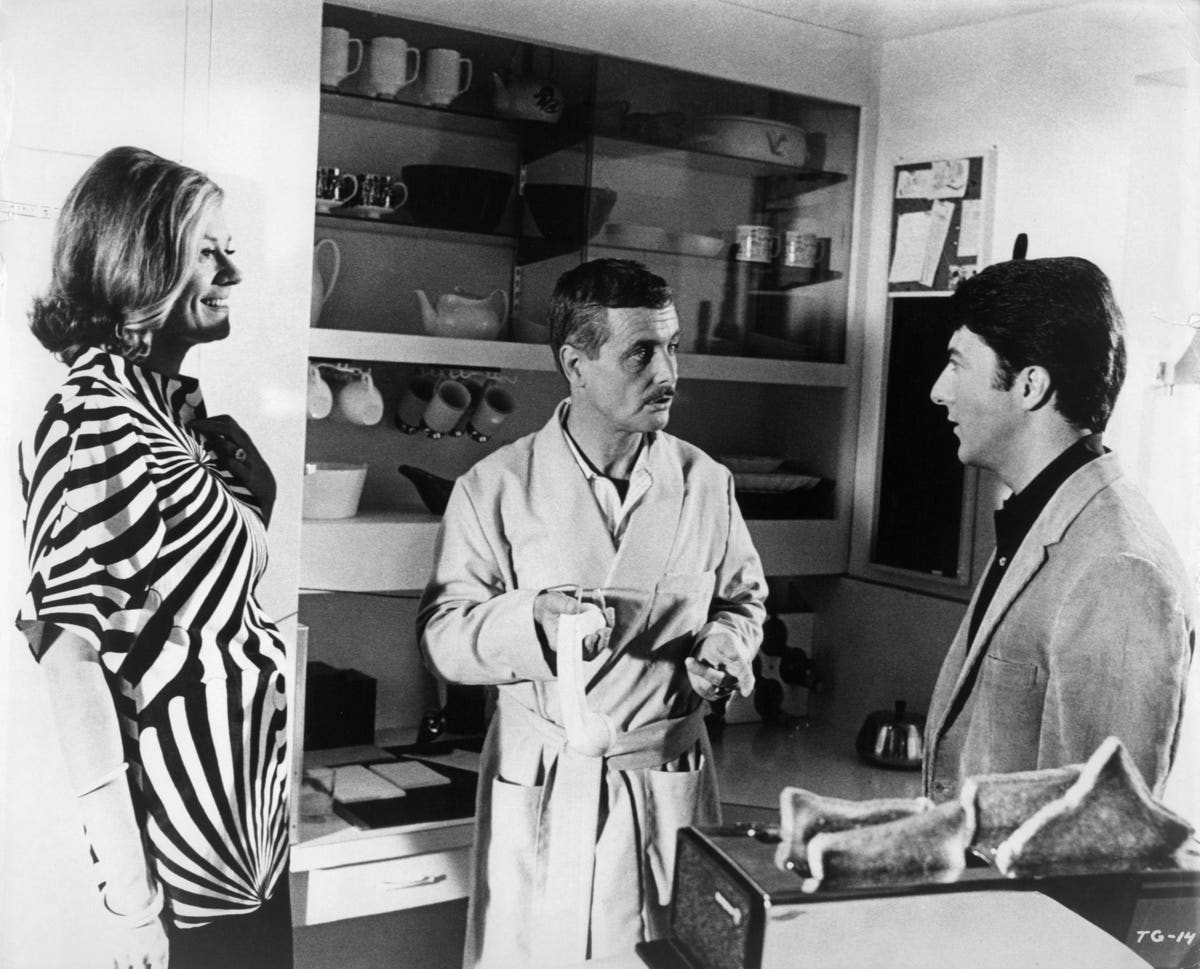 William Daniels has played many prominent roles during his storied career as an actor, including Dr. Mark Craig at ‘St. Elsewhere,” George Feeny in “Boy Meets World,” KITT’s voice in “Knight Rider,” Carter Nash in “Captain Nice,” John Adams in the musical “1776.” But for this journalist, Daniels’ role in the iconic coming-of-age, counter-culture film “The Graduate” may be the only one history remembers. Daniels played the part of Mr. Braddock, Ben Braddock’s (Dustin Hoffman) tightly wounded father. We thought it would be interesting to catch up with Daniels, now 95, to discuss his “graduate” role and other past acting careers. Below are edited excerpts from a longer conversation. In the phone interview, Daniels’ actress wife Bonnie Bartlett was fascinating in its own right.

Jim Clash: Bill, when you filmed ‘The Graduate’ in 1967, did you have any idea it would become the hit it was, and still is?

William Daniels: No, I don’t think anyone felt that way. That is actually a given in our profession. You don’t know what you’ve got until you play it in front of an audience, you know.

To collide: What was your reaction when you first saw the latest version of the film?

Daniels: I didn’t like it, because of what they had cut. Actually, I walked out when it premiered. My wife says I was a very difficult young man. Well I think I was [laughs].

To collide: In your recent book, “Here I Go Again,” you devoted a chapter to Mike Nichols, who directed “The Graduate,” and Buck Henry, who wrote the screenplay for it. What did they like to work with?

Daniels: My impression was that you didn’t get near them when they were together. With their sense of humor they would put you down quite a bit [laughs]. They were very smart, witty guys. I realized I wasn’t in their company, so I didn’t spend much time with them. I did of course [spend time] with Mike when he directed the film.

To collide: Originally, Nichols asked you to play the part of the Taft Hotel clerk, later played by Buck Henry, but you turned it down.

Daniels: I was out of town when I read [the script]. That was a small part. So yes, I turned it down. When I got back, Mike asked me to see why I turned it down. I said it was such a small part I only had to laugh twice. He said, “Well, what about the father?” I said, “Well, that’s a whole different story. I have to go back and look at it, that’s a bigger part.” So after rereading [the script], I told him I would like to play the father. It was unusual because there was only nine years difference between Dustin [Hoffman] and I. When I pointed this out to Mike, he said, “It doesn’t matter.” He just turned it down. And it turns out he was right.

To collide: The whole thing was perfectly molded.

Daniels: Yes. And you’ll notice that most of them came from New York. Mike was in a very strong position to get what he wanted having just directed two major Broadway plays. There were a lot of Hollywood stars who wanted to work on that picture too, and they made it known. But Mike turned them down and turned down the studio. At one point, he had cast Gene Hackman as Elaine Robinson’s father, but had to let him go. He brought the cast together and apologized, saying it was his fault he originally cast him, and replaced Gene with Murray Hamilton, a stage actor also from New York.

To collide: What do you remember about filming that famous scene where Ben is in the pool wearing the nice wetsuit you bought him just for his birthday?

Daniels: Mike spoke to the cameraman about how to film Dustin in the pool, with a photographer submerged on the other side, in shallow water from that angle. I was curious about it. I quietly walked over to him and Mike sensed I was there. He turned to me and said, “What?” I told him I was just interested in how he was going to film the scene. He turned to his cameraman and said, “Why is he attacking me?” That’s Mike, his sense of humor, or in this case no sense of humor [laughs].

To collide: That movie’s soundtrack featured a number of Simon & Garfunkel songs, most notably “The Sound Of Silence.”

Daniels: Most of us thought the movie was about a well-known Broadway star, Ann Bancroft. One day Mike asked me to listen to music from these two boys, one short and one tall. He played ‘The Sound Of Silence’. Suddenly I realized that the movie was really about this guy, Dustin Hoffman. That certainly gave me a completely different view of the film. During filming, the camera was always on Dustin. He was an unknown then. Mike had seen him on Broadway. The studio was really against Dustin. But Mike insisted and got his way, and of course it made Dustin Hoffman a star.

To collide: Why do you think “The Graduate” has endured all these decades?

Daniels: I have no idea. Like I said, you never know what you have until you put it in front of an audience.

This $100,000 golf adventure takes you across Europe on a luxury cruise ship

Navratri 2022: Know what NOT to offer Goddess Durga for nine days

The Bharat Express News - September 25, 2022 0
CHARLOTTE, NC - It's an advantage for Americans in the race to 15½ points on Sunday at the 2022 Presidents Cup, but the Internationals...