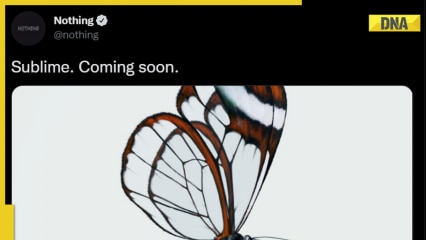 OnePlus co-founder Car Pei’s UK-based company Nothing has been in the news for a while now for its first smartphone, Nothing Phone (1). It looks like we might see another product from the UK-based company soon. Before the launch of Phone (1), Nothing shared a series of cryptic tweets teasing the device and again, the company has shared another tweet hinting at a new product. On September 15, Nothing shared an image of a transparent butterfly with the text ‘Sublime. Available soon.”

Nothing’s official tweet was also backed by CEO Carl Pei when he shared a caption: “The Animal Kingdom is calling again”. Apart from this, the company has not teased anything about the event or the product.

The “Coming Soon” banner along with a butterfly image can also be seen on the company’s official website. If we are to believe the reports, the company is gearing up to launch a new Nothing Phone (1) lite or a smartwatch that will join the ecosystem. For those who don’t know, Nothing already has TWS earbuds called the Nothing ear (1) that were launched last year.

Speaking to GSMArena, vice president of Nothing India, Manu Sharma revealed that the company has managed to sell more than 1 lakh units of the Nothing Phone (1) in 20 sales days on Flipkart.

Apart from this, Manu Sharma told GSMArena that the Nothing Phone (1) is currently the best selling smartphone on Flipkart when it comes to the price segment of Rs 30,000+.

ALSO READ  Nothing Phone (1) claimed to be the 'best seller' in its category, available at a discount in the Flipkart Big Billion Days sale