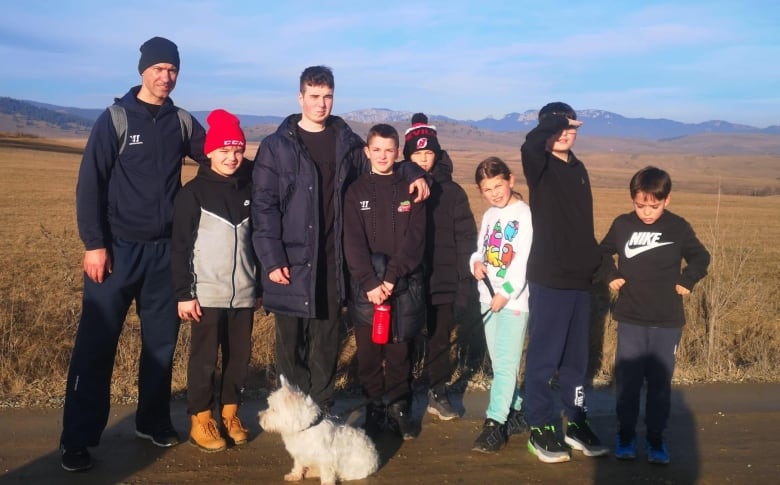 Quebec City’s Sean Bérubé has spent dozens of hours helping a Ukrainian hockey team over the past three months.

It all started in March 2022, not long after the Russian invasion.

At the time, Bérubé, who played hockey in Ukraine for four years in the 1990s, was trying to get his former coach out of the country.

With the help of an old teammate, Yevhenii Pysarenko, Bérubé managed to get the coach and his family from Ukraine to Quebec, where they stayed with him.

ALSO READ  In 2023, Canadian basketball teams can lay the groundwork for a potentially memorable 2024| TBEN Sports

To thank Pysarenko for his help, Bérubé offered to buy him a beer.

Instead, he says, Pysarenko asked for a slightly bigger favor: support to get a Ukrainian hockey team to Canada for the Quebec International Pee-Wee Hockey Tournament.

“I was joking about it and I said if you want to bring a team, it has to be a team of refugees,” Bérubé recalled.

“I didn’t think he was that serious…but I think the project grew inside him and at some point he started organizing camps there in the summer, just for Ukrainians.”

Three months ago, the dream began to come true when the tournament allowed the participation of the Ukrainian team.

Since then it has been a rush of paperwork, visa applications and parental consent for a group of 17 Ukrainian 12-year-old boys scattered across Poland, Hungary, Slovakia, the Czech Republic, Romania, Germany and Canada.

Quebec City’s Pee-Wee International Hockey Tournament is back next month. And general manager Patrick Dom is working hard to bring a group of young athletes from Ukraine, most of whom have fled their home countries.

Dreaming of playing in Canada

Pysarenko first came up with the idea of ​​creating a hockey team when war broke out in Ukraine in February 2022.

“I tried to help as many children and former colleagues as possible,” said Pysarenko. “That gave me the idea to get them together to play some tournaments.”

Pysarenko had his sights set specifically on Quebec City’s peewee tournament, an internationally renowned competition in which he participated as a player decades ago.

He slowly began to find players through his own contacts and recommendations from other coaches.

With the children scattered all over the world, some still in Ukraine and some in neighboring countries such as Poland and the Czech Republic, practicing was a challenge.

Two weeks ago they held a try-out and training in Romania. He says there is excitement among the boys, who will practice again on January 28.

“All hockey kids dream of playing in Canada and everyone knows the [Quebec] peewee tournament in Ukraine. They want to show that Ukraine is a strong country,” says Pysarenko.

“They will go to Canada and show everyone that we are still playing hockey. It’s like a miracle.”

‘Thank God we had hockey’

Bérubé notes that if the boys make it to the tournament, it’s less about winning and more about enjoying the opportunity.

“It’s about being there for the experience… To get out of the war and live this experience,” said Bérubé, the team’s representative at Immigration Canada.

He says when children are going through a tragedy, it’s important for them to have an outlet and things to look forward to. Bérubé knows this first hand. His sons lost their mother in August.

“I believe in sports therapy and I’ve seen it with my two sons… for them to return to the arena after what happened to their mother,” Bérubé said. “Thank God we had hockey.”

The Ukrainian players face a unique set of challenges, Bérubé said. He recently learned that one of the players’ fathers died while serving in the military. Other children’s families have no electricity, which complicates the visa application and paperwork.

“I’ve asked all the parents to send me pictures of their birth certificates, all their passports, all the information and I don’t really know how many hours I spent on it. About 50 hours,” Berube estimated.

Patrick Dom, general manager of the peewee tournament, is confident that things will work out.

“We are still in the process of getting the visas for all children and adults, but you know, we talk to Immigration Canada every day and we hope that all visas are delivered quickly,” said Dom. “It’s a long process, but we’re confident in getting the team here.”

Dom notes that if the visas are in time for February’s tournament, the Ukrainians will be billeted in local homes and welcomed with open arms.

“The first time they get here on the ice, we just want the Videotron center here in Quebec City to be packed with people to show them how much we love them,” said Dom. “We stand behind them.”