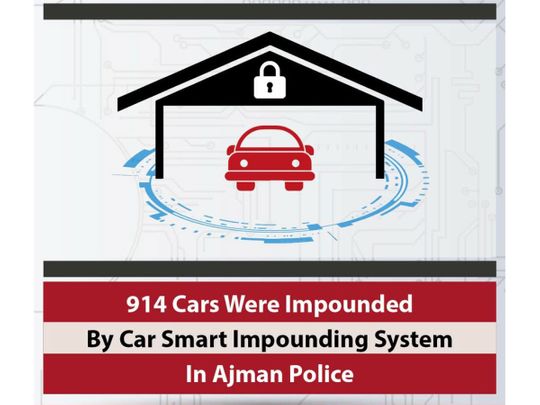 Ajman: Ajman police have confiscated 914 vehicles since July for various serious violations and forced their owners to keep them in their homes after installing GPS trackers to detect their movement.

Major Rashid Humaid bin Hindi, head of the investigation and traffic control department at Ajman Police’s Traffic and Patrol Department, said under the new service, the police were removing license plates. of the vehicle and ownership of the vehicle until the end of the impoundment period.

Police have ordered vehicle owners to keep their vehicles inside their homes and not use them until they pay their fines and the impoundment period ends. Any motorist breaking the rules will be liable to penalties in accordance with the highway code.

Major Bin Hindi said the vehicles will be posted on the federal system and the vehicle will be monitored by GPS during the reservation period.

He said the service has witnessed an increasing demand from the public to seize their infringing vehicles in their private parking spaces instead of the designated area, allowing them to look after them for the period of confinement. This also helps to prevent the vehicle from being affected by weather conditions, knowing that it is allowed to drive and move it within 30 meters of the allocated space.

Major. Bin Hindi reported that 85% of the vehicles seized were seized due to the violation of the traffic light jump followed by the excessive speed violation, explaining that the service charge was Dh500 for the first month, in more than 100 Dh for each additional month. .

Major bin Hindi added that the customer can request the service by taking their vehicle to the traffic and licensing service center and submitting the request. Then, a technical team installs the device and connects it electronically to the central violation system and the 24-hour surveillance system,

In July, Ajman Police announced that motorists can now keep their vehicles impounded at their own premises instead of police-designated impound yards.