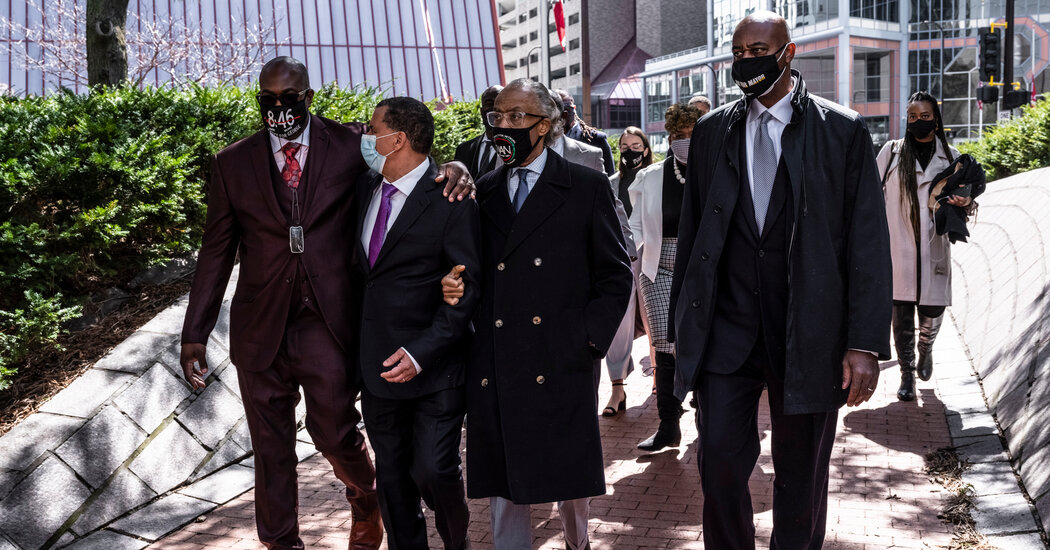 George Floyd’s relatives prayed outside the courthouse with Reverend Al Sharpton on Tuesday, asking God for the jury’s “justice” and the strength to continue to closely monitor the trial unfolding on the 18th floor of the building behind them.

“Give this family the strength they can endure the recurring sight of seeing their brother with a knee on his neck,” Mr. Sharpton said. “A knee that represents the lifelong knee on the necks of all black Americans.”

As he spoke, testimony continued inside the courtroom during the trial of Derek Chauvin, who was charged with murder in the death of George Floyd. Ben Crump, an attorney for the Floyd family, said the family had been told autopsy photographs could be presented to court on Tuesday.

Prosecutors have already shown several graphic videos of police confronting Mr. Floyd and Mr. Chauvin kneeling on top of him for more than nine minutes. Mr. Sharpton said he prayed for all of those attending the trial who were “in pain” about the Floyd family.

Besides Mr. Crump and Mr. Sharpton, several high profile black politicians and activists accompanied the Floyd family. Among them were David A. Paterson, the former governor of New York; Gwen Carr, Eric Garner’s mother, died in 2014 when a New York police officer suffocated him; and Ray McGuire, who is running for mayor of New York and who has the endorsement of Ms. Carr.

Afterwards, Philonise Floyd, a brother of George, put his arm around Mrs. Carr.

“We and Ms. Gwen Carr, after we get the verdict and get this conviction, we can breathe,” he said.