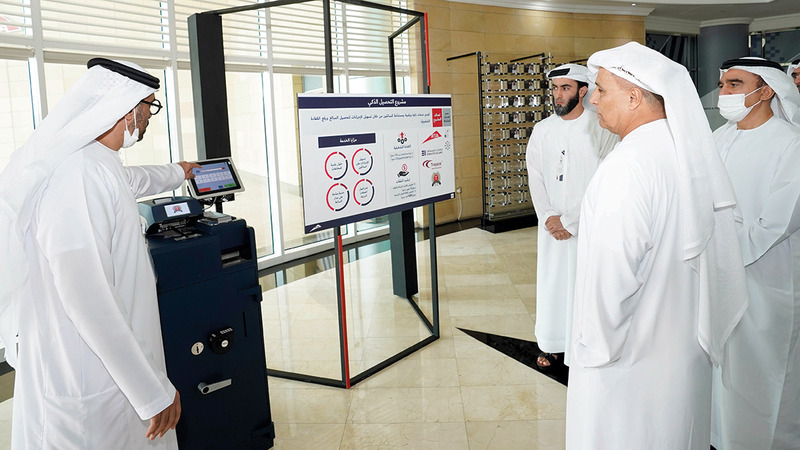 The Director-General and Chairman of the Board of Executive Directors of the Roads and Transport Authority in Dubai, Mattar Al Tayer, has approved a package of development projects and initiatives at the Dubai Taxi Corporation, including the expansion of the use of artificial intelligence techniques and process automation, with the aim of raising the level of operational efficiency of the taxi transportation service, and enhancing traffic safety.

He stressed that the package of services and development projects aims to achieve leadership in providing safe and sustainable digital transport services, characterized by excellence, innovation, foresight for the future, achieving sustainability, and achieving the highest indicators of customer happiness.

During his meeting with the employees of the Dubai Taxi Corporation, Al Tayer explained that among the approved package of projects and initiatives is the “smart routing” project for taxis, which aims to use artificial intelligence techniques and big data analysis, to automatically direct vehicles to the areas of greatest demand for a specific region or group of vehicles. The project also aims to reduce vehicle fuel consumption and increase the number of trips per vehicle.

He referred to the “Robotic Process Automation RPA” project, which contributes to improving the operational efficiency of vehicles by 3%, increasing data accuracy and forecasting the most demanded areas by 10%, achieving the speed of flight implementation, raising the percentage of productive kilometers, increasing the rate of acceptance of trips by 15%, and reducing the cost of resources. Humanity 20%, explaining that the most prominent areas of the project’s work are the smart distribution of taxis and Tesla vehicles, automation of daily revenue collection for limousine services (Uber and Careem), preventive maintenance for taxis, in addition to distributing requests according to the battery capacity in Tesla vehicles, and sending alert notifications. For drivers on time of shipment.

Al Tayer revealed the “Smart Collection” project, which aims to provide smart, digital and sustainable services to drivers by facilitating procedures for collecting amounts, raising operational efficiency, and creating a supportive and stimulating environment to attract drivers. It also aims to achieve operational efficiency for vehicles, increase the number of trips, rationalize and reduce costs. Maintenance and fuel, facilitating procedures for drivers, finding digital solutions for transactions, and making the service available around the clock.

Al Tayer was briefed on the investment plan and commercial companies of the Dubai Taxi Corporation, with the aim of exploiting future growth opportunities and enhancing profitability to ensure a more sustainable and inclusive future, as the Corporation achieved profits of 118 million dirhams during the first half of this year, and signed seven commercial agreements covering taxi and limousine service , and buses.

He was also briefed on the Tesla 3 vehicle, which the Dubai Taxi Corporation has started experimentally within the regular taxi fleet, as part of the Corporation’s efforts to expand the use of environmentally friendly vehicles. With indoor and outdoor cameras, a student inspection system, a motion detector, and an automatic fire extinguishing system.

Sharjah Forum for “elderly”: 14,000 beneficiaries of the services of senior citizens in the country

Most notably, “Curriculum Development” .. 9 recommendations of the International Forum for Government Communication