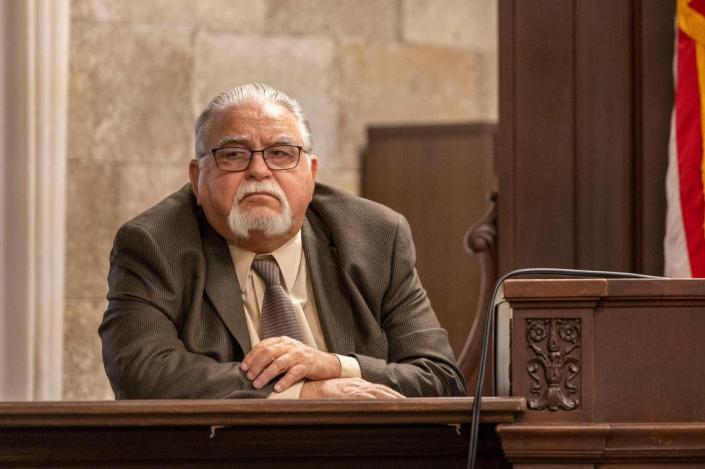 A federal magistrate Thursday released pending trial one of the men accused of running a violent sex trafficking ring in the late 1990s under the protection of a former Kansas City, Kansas, police detective.

Magistrate Judge Rachel Schwartz released Richard “Bone” Robinson, 58, after assistant attorney Stephen Hunting said prosecutors did not want further detention. Robinson was ordered not to have contact with his co-defendants.

Robinson and two other men were charged in an indictment unveiled this week with running the operation out of the Delavan Apartments, which one of his co-defendants, drug kingpin Cecil Brooks, owned at Delavan Avenue and 26th Street in KCK. According to the indictment, their crimes were covered up by then-detective Roger Golubski, who allegedly paid Brooks.

At the conclusion of the hearing, Robinson was handcuffed and returned to the US Marshals Service to be processed for release.

ALSO READ  Don Jr. and Ivanka fail to show up for Trump's 2024 speech, despite his pleas

In September, Golubski was charged separately on six federal charges that alleged he sexually assaulted and kidnapped a woman and a teenager between 1998 and 2002, though prosecutors allege he stalked or raped seven other victims.

Federal prosecutors had argued that Golubski should be detained prior to trial, deeming him too dangerous to release. But Schwartz allowed him to return to his home in Edwardsville under house arrest, noting that he has health issues that require regular attention.

Schwartz again allowed Golubski to return home after making his first appearance Monday on the new charges. He remains under site surveillance.

Another accused, LeMark Roberson, 60, was arrested Monday by the FBI in Cleveland, Ohio, where records show he has an address nearby.

Magistrate Judge Jennifer Dowdell Armstrong in the Northern District of Ohio heard arguments Thursday morning from prosecutors and Roberson’s attorney about whether or not to detain him ahead of trial. The judge said she would issue a written ruling later.

At that hearing, prosecutors said Roberson was a danger to the community and noted that he has a criminal history, including a federal conviction for conspiracy to distribute crack cocaine in Topeka with Brooks.

Roberson’s federal public defender Carolyn Kucharski acknowledged that the allegations facing Roberson are “appalling” but said the allegations date back more than 20 years.

Kucharski argued that Roberson did not pose a flight risk, saying he does not have a passport and previously did not flee when officers questioned him about the case. She said Roberson, an Army veteran employed by Veterans Affairs, likely came to Ohio for a “fresh start” after being released from federal prison in 2016.

The fourth defendant, Brooks, remains in custody at the Federal Medical Center in Fort Worth, Texas.

Brooks, 60, has been behind bars since he pleaded guilty in 2009 to conspiracy to distribute crack from an apartment near Topeka High School, just steps from the Kansas State Capitol.