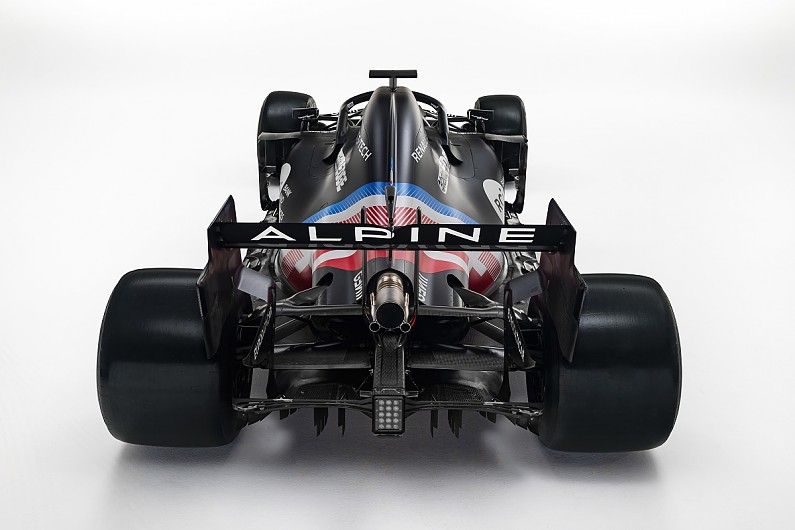 Alpine will unveil its new A521 Formula 1 car next month after teasing its new look at a Renault press conference on Thursday morning.

Renault announced last September that it would rename its F1 factory team under the Alpine name for 2021 as part of a reorganization of its various brands.

During a press conference describing its new strategic approach – called “Renaulution” – plans to regroup Renault Sport’s various activities under the Alpine brand were explained, including the rebranding of the F1 team.

As part of the launch, a teaser of the 2021 livery was presented via an interim livery, with a black base with red, white and blue colors adorning the rear of the car and the front and rear fender trims.

The color black is a tribute to the 1975 A500 F1 prototype, according to the team, who called the design a “temporary winter livery.”

The provisional livery will be in place until the full launch of the new car – whose name has been revealed to be the Alpine A521 – at an event next month with drivers Fernando Alonso and Esteban Ocon.

“The livery presented today is the first evocation of the new identity of the Alpine F1 team,” said Antony Villain, Alpine Design Director.

“Some structural graphic elements will remain on the racing livery while others will change. The ‘oversized’ Alpine emblem in a tricolor graphic system is the first clear symbol of the brand’s identity in motorsport.

“Blue, white and red refer to the colors of the French and British flags, which is very important to us. Many variations on all the strengths of motorsport are still to come.”

ALSO READ  Verstappen: No regrets about the missed chance at Mercedes F1 in 2014

MORE: Why Alpine’s Latest Signing Could Be His Best Hope for F1 Glory

Plans are in place for a new fully electric sports car to be designed in collaboration with Lotus, with both parties ready to “conduct a full feasibility study for the joint engineering, design and development of a sports car. EV by leveraging the resources, expertise and facilities of the respective entities in France and the UK. “

Alpine’s future road car product plan is also fully electric and is expected to build on the technology and lessons of its F1 team going forward.

The strategic goal was also for the Alpine brand to be profitable in all activities, including F1, by 2025, with this offering to be supported by the new F1 budget cap in place for this year.

“The know-how of our Dieppe plant, the engineering expertise of our Formula 1 and Renault Sport teams will shine through our 100% electric range infused with technology, bearing the beautiful name Alpine towards the future.

“We will be on the tracks and on the roads, authentic and high-tech, disruptive and passionate.”

Button: New Williams F1 owners “are not afraid of change”

From the archive: Button’s latest spell with Williams

The Bharat Express News - January 23, 2021 0
The past 12 months have certainly highlighted how the internet is an integral part of Japan.The COVID-19 outbreak in February immediately accelerated a shift...