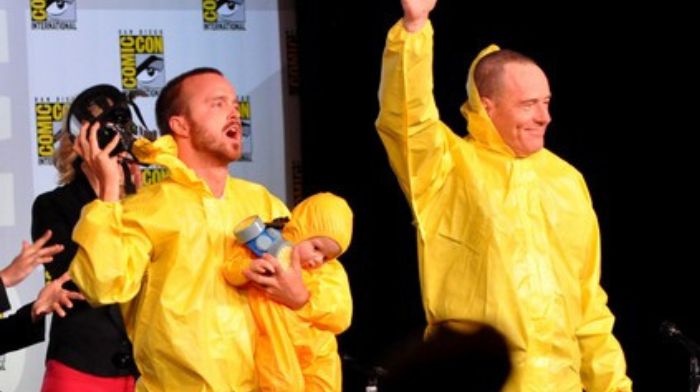 The City of Albuquerque unveiled bronze statues of the main characters of the hit TV series “Breaking Bad,” Walter White and Jesse Pinkman, at its convention center last Friday.

For those unfamiliar with the series that spawned the popular prequel “Better Call Saul,” the original series followed the adventures of a high school chemistry teacher and students as meth cooks and dealers. (Oh, and multiple killers.)

I’m not going to lie; I was a fan of the series and would recommend it to friends and family. However, I’m not sure about the coverage of the two characters tanning and celebrating the series so openly.

Not only is it odd in general, but in a state that has historically and still struggles with drug overdose and the crime surrounding the drug use epidemic, it seems a little tone-deaf.

Stars of Breaking Bad and Better Call Saul are in Albuquerque today for the unveiling of the statues of Walter White and Jesse Pinkman. pic.twitter.com/ygOScQAIyM

So let’s take a closer look at the state known as the Land of Enchantment and its sordid history of drugs and statues.

Not as enchanting as deadly

New Mexico was its own character on the hit show “Breaking Bad.” And while I’ve been to the state many times and enjoyed Albuquerque and other cities whenever I would visit, the show highlighted perhaps the most unsavory aspect of this Southwestern beauty.

One border state, New Mexico, saw an increase in fentanyl-related deaths of up to 129% between 2019 and 2020. Last year, fentanyl and meth surpassed heroin and prescription opioids as the leading cause of overdose deaths.

Against this backdrop, “Breaking Bad” director Vince Gilligan admitted that “two fictitious, notorious meth dealers” will not be “generally cherished in New Mexico.” In particular he said:

“In all seriousness, no doubt some people will say, ‘Wow, just what our city needed.’ And I get that.”

However, he goes on to say:

“I see two of the best actors America has ever produced. I see them, in character, as two larger-than-life tragic figures, cautionary tales.”

Breaking Bad statue? Not comparable to the Tony Soprano statue at a train station in Lithuania? pic.twitter.com/CCWnYz7pgv

I enjoyed the show, but to say that Bryan Cranston and Aaron Paul are two of the best actors we’ve ever produced is probably going too far. I could write a separate article about that statement alone. However, it is reasonable to take a moment to see how this show and statue can help the economy of the state.

New Mexico estimates that the “Breaking Bad” franchise has an economic impact of $385 million. An apparent influence when it comes to unveiling the statues, as New Mexico has the highest unemployment rate in the country.

It is also important to note that no taxpayer money was spent creating the Articles of Incorporation. Instead, Sony Picture Television commissioned the bronze ‘work of art’.

So Albuquerque may have their Breaking Bad statues, but here in Detroit we can’t find a place for our RoboCop statue? That makes no sense.
That’s bullshit! https://t.co/kshhpwFp1z

New Mexico Republican Representative Rod Montoya said of the influence of the show and the images:

“I’m glad New Mexico took over, but really? Are we going to literally glorify methmakers?”

This comment is of particular interest to New Mexico, given the recent controversy and removal of a bronze statue that was a nod to the state’s history. A statue of the Spanish conqueror Juan de Onate.

Known for the Spanish colonization of New Mexico, Juan de Onate was its first colonial governor. History tells us that the Onate was a vicious man known for massacring large swaths of Native Americans. However, there are similar arguments that he played a crucial role in shaping the state.

To Indians of the state, he is seen as a tyrant. However, for many New Mexico Hispanics, the belief is that the state would not have the unique hybrid of cultures if it were not for Spaniards like the Onate.

“Someone might look at the statue and say, ‘I see the beginnings of Spanish culture. I see the Spanish language being brought in. I see Catholicism beginning here.’ But someone else will look at it and say, ‘I see my religion being suppressed. I see my culture being eliminated. I see my ancestors being forced to work and pay tribute.’”

The sculptor of the de Onate piece, Reynaldo Rivera, uttered what is often seen as controversial language that touches on the idea that all lives matter, stating after the removal of his work:

“Indian lives are important. But my people, Spanish lives, matter too. I matter. My art is important. And I am angry.”

I don’t blame you, Mr. Rivera. I would be angry too.

“Those who tell the stories rule the world.” – Hopi proverb

Then Tsídéh, 19, of the Ohkay Owingeh Pueblo dances on the empty platform where a statue of Juan de Oñate has been removed. Photo: Gabriela Campos/The Guardian pic.twitter.com/ISRT7CHsBm

RELATED: Wisconsin College Students Demand Lincoln Statue To Be Demolished Because While He Was ‘Anti-Slavery’ He Wasn’t ‘Pro-Black’

It has become very trendy to remove statues and demonize historical figures in an attempt to reshape or, in some cases, erase our history. There have also been calls for action, such as renaming George Washington University since our first president was a “human slavery.”

While my old alma mater will keep its name, earlier this year they announced that they will be removing the “Colonials” nickname because it “glorifies” colonialism.

A report on the change notes a similar trend to the New Mexico historian, the duality of problems:

“For supporters, the term refers to those who lived in the colonies, especially those who fought for independence against England and, with courage, courage and against all odds, secured democracy for the United States. To opponents, “settlers” means settlers (both here and abroad) and refers to those who stole land from indigenous groups, looted their resources, murdered and exiled indigenous peoples, and introduced slavery to the colonies.

Strange how in a free country some people disagree on issues and symbols. Wondering what should be the right response to such a clash of ideas?

There are too many examples of statues of the Founding Fathers and other historical figures that were demolished to list them all here, but just a few:

Is the correct answer to remove what happens to offend a certain side to calm their feelings? Or is the right answer to participate in a social debate and debate about historical context and impact?

Will anyone demand the removal of these statues of fictitious drug dealers?

All in all, I don’t care about this “Breaking Bad” statue in Albuquerque. In the words of the show’s main character, Walter White, I sleep well despite the silly statue erected in a city plagued by drug use.

However, I think this is an interesting example of what we value and what offends our sensitive nature in this country. When the debate began over the statue of the Onate, Native American and American Studies and University of New Mexico professor Melanie Yazzie said:

“These monuments glorify colonialism and have really erased the history of the indigenous resistance.”

I would argue that the “Breaking Bad” statues glorify drug use and erase the trauma felt by families plagued by overdose deaths. But you do what you want, New Mexico. Last I looked, this is still a free country.

Meanwhile, in other news, cemetery administrators in Philadelphia, Montpelier, Mount Vernon, Quincy, Monticello and several other 18th-century sites are reporting strange disturbances, as if bodies are turned over in graves.

RELATED: The Mob Is Going After Abraham Lincoln