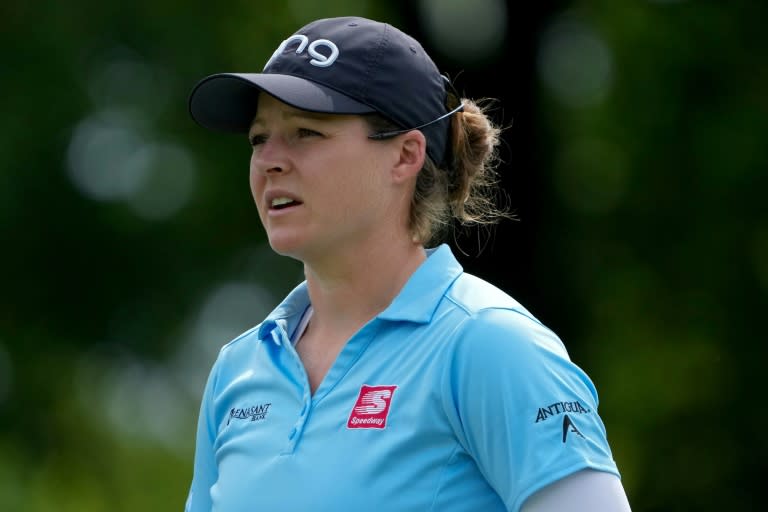 Ally Ewing fired a five-under par 67 to grab a one-stroke lead over Mexico’s Maria Fassi after the third round of the LPGA Queen City Championship on Saturday.

The 29-year-old American opened the front and back nines with birdies and birdied on all four par-5 holes to be 16-under 200 after 54 holes at Kenwood Country Club in Cincinnati, Ohio.

“My mentality was just to keep to myself and get good shots and I did it really well,” said Ewing, stumbling with a closing bogey.

“Unfortunately bogey at 18, it’s a difficult hole but I’m very happy with how I played and how I treated myself and it leaves me in a good position for tomorrow.”

Chasing her first LPGA triumph, Fassi also shot 67 to take second with China’s Lin Xiyu in third on 202 after a 70.

“The course started to get a lot more challenging,” Lin said. “The greens were very firm. Overall, I didn’t feel like I was playing my best, but I stayed very patient. I’m staying positive and chasing it.”

Ewing, the tour leader in achieving greens in regulation, is aiming for her third LPGA title after the 2020 Drive On Championship at Lake Oconee and 2021 LPGA Match Play.

“I can’t help but be thrilled with what I did for the first three days,” Ewing said. “There’s still a lot of golf left. I’m looking forward to the challenge.”

Strong putting has boosted Ewing’s confidence after a long season.

“I lost confidence all year round. Just seeing putts and being a confident putter is where I am mentally,” said Ewing.

World number 52 Ewing, who started the second day behind leader Lee6, led off with a birdie and added two more on the par-5 second and fourth holes to take the lead.

Ewing landed her approach on the 10th on the edge of the hole for a tap-in birdie and dropped her approach inches from the cup on the par-5 12th to set up another birdie for a two-stroke edge.

Fassi raised a spectacular hole-out eagle from the fairway on the par-5 15th, leapt into second place at 15-under and soared into the air with joy and a fist pump after the shot came.

“It was honestly the worst place I could have left myself for my third shot,” said Fassi. “My only thought was to hit it as high as possible and the result was an extra.

“I hit a great golf shot and I’m just really happy it went in and I was able to get some momentum for the last few holes. That was really cool to see.”

Ewing responded by making an eight-foot descent on the 15th to reach 17-under, completing her full set of par-5 birdies.

Ewing found a greenside bunker at age 17, her first missed green in the rules of the day, but went to a height of three feet and dropped her par putt.

At age 18, Ewing was short on the green, but threw 18 feet past the hole and missed her putt for her only bogey of the round.

Fassi had four birdies on the first seven holes before her only bogey on the eighth.