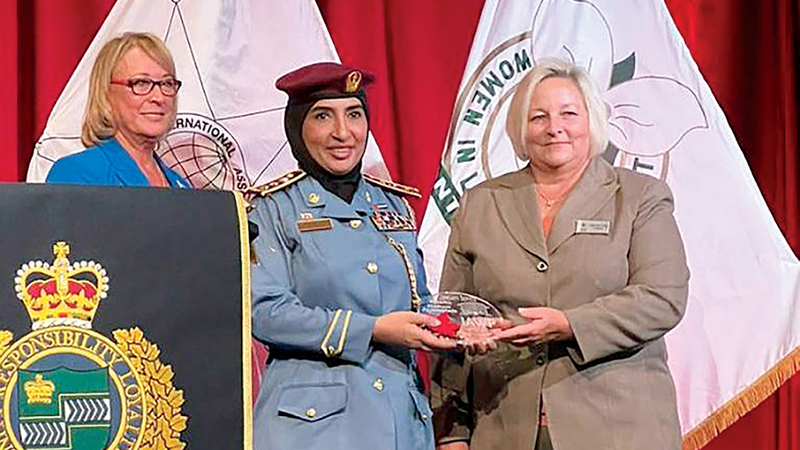 Captain Maryam Mohammed Al Hammadi, from the Ministry of Interior, won the Community Service Award granted by the World Association of Women’s Police, at the conference held by the Association in Canada to honor award winners from the police component.

Al Hammadi was honored during the participation of the delegation of the Ministry of Interior, headed by the Commander-in-Chief of Ajman Police, Major General Sheikh Sultan bin Abdullah Al Nuaimi, in the 59th session of the conference, a conference in which various countries of the world participate to share knowledge and experiences in various fields in the police work of the female component.

Captain Maryam Al Hammadi dedicated this victory to Her Highness Sheikha Fatima bint Mubarak, President of the General Women’s Union, President of the Supreme Council for Motherhood and Childhood, Supreme Chairwoman of the Family Development Foundation “Mother of the Emirates”, stressing that the achievement came with the vision and support of Lieutenant-General His Highness Sheikh Saif bin Zayed Al Nahyan, Deputy Prime Minister The Minister of Interior, and the leadership’s keenness to support and empower Emirati women in various fields.

Al Hammadi won the award for her outstanding achievements in her career in the police corps at the Ministry of Interior, as she is one of the pioneers in community service and unlimited giving. .

She also had contributions, contributions, and a major role in community service. She is distinguished in volunteer work, implementation of community initiatives, and activities to spread a culture of tolerance. In her career, she won many local, regional and international awards.