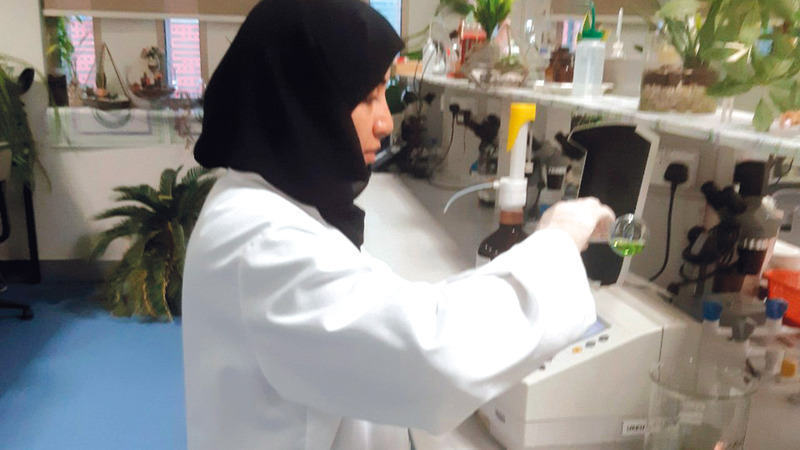 A study conducted by the Emirati researcher, Dr. Fatima Al-Hamdi, entitled “Using and Evaluating Treated Wastewater on Wheat Production Technology in the Light of Different Cultivation Patterns”, reached important results related to the possibility of improving the growth and production rates of the wheat crop, when using treated wastewater in the country.

The field study focused on the cultivation of two types of modified wheat, for use in the country’s environment from two stations in the Emirate of Abu Dhabi using three techniques, namely, traditional field cultivation by drip irrigation method, hydroponics, and cultivation in light of climate change in the country.

During the results of the study, in which she obtained her PhD from the UAE University, Al-Hamdi explained that the application of hydroponics technology achieved promising results when using treated sewage water in the preparation of the aqueous solution.

She indicated that the highest rate of productivity of the wheat crop was when using recycled water produced from Al Ain city stations, due to its chemical and physical composition, explaining that the competent authorities are currently studying the possibility of benefiting from this water for agricultural purposes, according to the appropriate standards, which may include many crops. Agricultural projects that contribute to achieving food security in the country, and optimizing the use of recycled water.

She pointed out the most important points that should be taken into consideration, which is choosing the type of wheat that suits the country’s environment, as with technological progress, there are many types of wheat that have been modified to suit different environmental conditions.

The study summary stated that the production of wastewater from domestic and industrial sources is steadily increasing with the increase in population rate, urbanization, industrial revolution and economic developments. Globally, 80% of wastewater flows into the ecosystem without treatment or reuse, and it consists of harmful substances Several hazardous chemicals, which may cause many deadly effects to humans as well as to the ecosystem.

An Emirati-British study reveals a new way to increase rain by “changing the behavior of water droplets.”