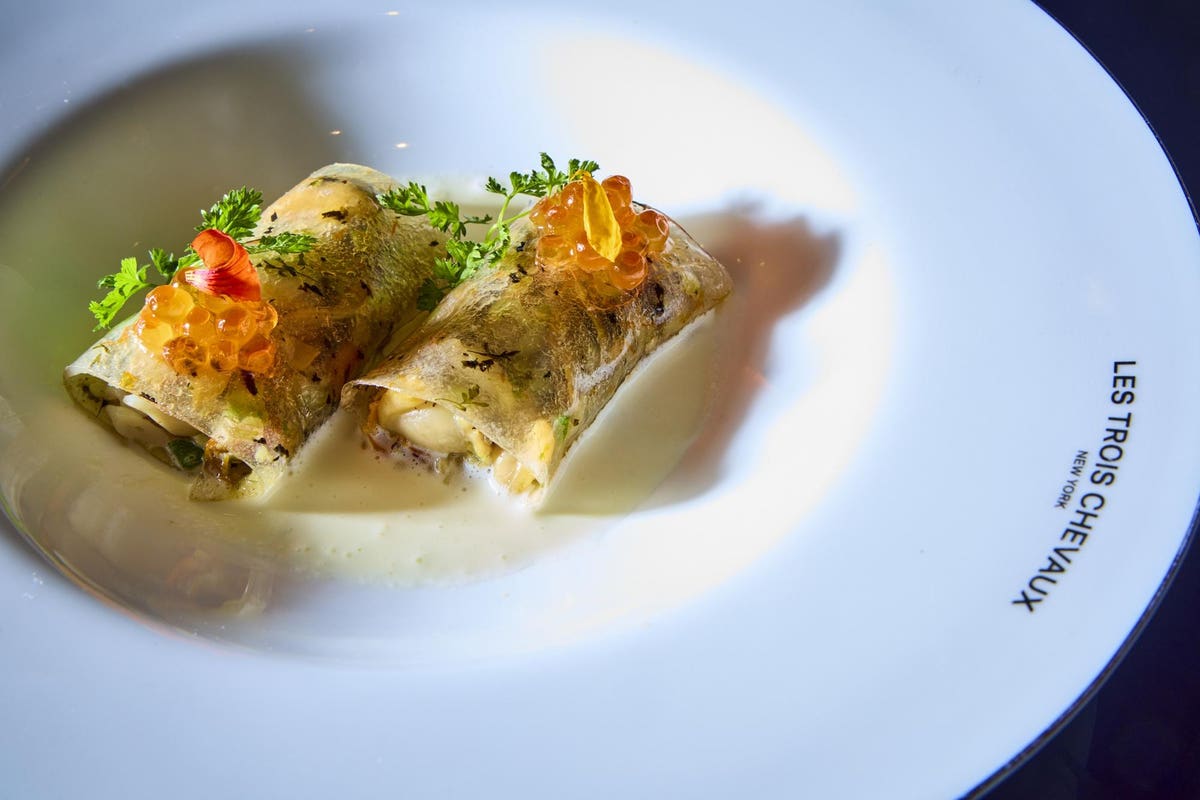 Anyone who was a fan of Chef Angie Mar’s last restaurant, the dark, moody, underground temple of beef The Beatrice Inn, will be surprised by the appearance of its successor Les Trois Chevaux in the space next door. For one, it is above ground, with a deep blue velvet sofa, antique etched mirrors and one with a gold leaf frame by the Florence-based restorer who worked on the Mona Lisa’s frame, full of art and unique finds such as lamps with metal horse feet from an antiques dealer in Antwerp and the original chandelier from 1931 from the Waldorf. It’s a small jewelry box. The cooking style couldn’t be more different either. “This is what I wanted to cook,” she says. “I was so attached to what that restaurant was, but I am French trained and I refer to this menu as hyper-inspiring, a beautiful expression of art, literature, the ingredients we love.”

Her transition was admittedly not voluntary. After the start of the pandemic, a 40% rent increase in combination with the closure of indoor dining meant the end of The Beatrice. It also marked the end of this restaurant’s previous tenant, the Farm at Table Blenheim, so she took up the space. But celebrity chef, mentor and artist Jacques Pepin advised her not to simply recreate The Beatrice. (The Matisse-esque painting on the left wall at the entrance is his.) “He told you to let it go. You have to believe that you are ready to do something for you, not something that is at the mercy of you. When someone like Jacques says you’re ready, you should listen. You have to move on.”

That translates into a concentration on French cuisine, the food she has always loved, with aspects of the cuisine of her Chinese heritage and other Asian ingredients focusing on the sea and sky, fish and poultry, often mixed with what may seem like unconventional ways. This is reflected in dishes such as cannelloni de fruits de Mer prepared with Chinese crystal dumpling technique, razor clams from Washington state, mussels from Prince Edward Island and clams from New Zealand; monkfish with black truffles wrapped in pheasant skin while roasting providing moisture and tenderness rarely seen in those usually difficult to cook fish and a cross between mallard duck and peking duck in which the duck is dry aged for two weeks and then buried in Japanese Sakura blossoms and Okinawa Kokuto sugar for five days and served in a sauce with lotuses and Armagnac. And they’re all arranged in visually pleasing ways, like the duck she says is reminiscent of her front yard growing up in Washington state with the koi pond, lotuses, and ducks.

Beef was not part of the mix. “When I was at the Beatrice it was all about steak and meat. When I opened this restaurant, I thought people thought this was all I could do, but I really wanted to do something different,” she says. However, a year after opening, she finally decided to put a beef dish on the menu. But like the other dishes on the menu, the ingredient is a perfectionist and labor-intensive: sirloin steak cooked for hours using a slow-fire technique over coals wrapped in seaweed: starting at a meter height and moving closer every half hour. It is then served with a mille feuille of pommes de terre: thin potatoes cooked in chestnut butter and served with osetra caviar.

This is undeniably elite dining in a neighborhood known for its wide variety of restaurants, but definitely more casual, the kind of restaurant Mar doesn’t see itself doing. But she insists her restaurant isn’t just for the 1%, even though there are affluent diners among her regulars (including Le Bernardin’s lofty chef Eric Ripert who comes in on his days off). She remembers how early in her career after graduating from culinary school she would save up to have a superb meal at Per Se, Le Bernardin or Daniel and knows that other young aspiring chefs do the same; they are among its customers here, as are travelers who have come to New York especially for the restaurants.

“Restaurants really bring everyone to the table. You come here because we can transport you to another world for a few hours,” she says. So she’s troubled by what she sees as a critical response to the idea of ​​fine dining, as it’s seen as just for the elite. “These restaurants are so important in a city like New York, which has always been ambitious for the world. If these restaurants are not supported, it will be the downfall of an entire industry within a generation,” she says. “We can’t always just eat fried fish.”

How the Nobu brand has perfected effortless luxury around the world