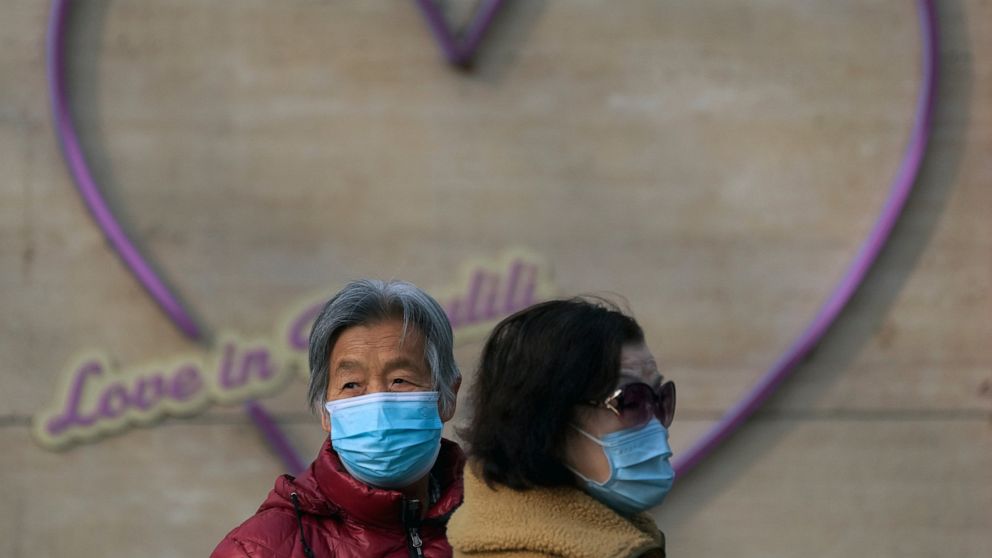 BEIJING — More than 253,000 coronavirus cases have been diagnosed in China in the past three weeks and the daily average is rising, the government said on Tuesday, putting pressure on officials trying to mitigate economic damage by easing controls on millions of people at home. makes it even bigger. .

The ruling Communist Party pledged earlier this month to mitigate disruptions to its “zero-COVID” strategy by making controls more flexible. But the latest wave of outbreaks is challenging that, leading major cities, including Beijing, to close densely populated neighborhoods, close shops and offices, and order factories to isolate their workforce from outside contact.

That has fueled fears that a downturn in Chinese business activity could hurt already weak global trade.

The average of 22,200 daily cases over the past week is double the week before, the official China News Service reported, citing the National Bureau of Disease Prevention and Control.

“Some provinces are facing the most serious and complex situation in the past three years,” agency spokesman Hu Xiang said at a news conference, according to CNS.

The number of infections in China is lower than in the United States and other major countries. But the ruling party is sticking to ‘zero COVID’, calling for each case to be isolated, as other governments relax travel and other controls and try to live with the virus.

ALSO READ  Long Covid may be 'the next public health disaster' — with a $3.7 trillion economic impact rivaling the Great Recession

On Tuesday, the government reported 28,127 cases found in the past 24 hours, including 25,902 with no symptoms. Nearly a third, or 9,022, were in Guangdong province, the heart of export-oriented manufacturing bordering Hong Kong.

Investors are “concerned about declining demand due to a less mobile Chinese economy amid fears that more COVID-related lockdowns will come,” StoneX’s Fawad Razaqzada said in a report.

China is the world’s largest trader and the top market for its Asian neighbours. Weakness in consumer or factory demand could hurt global producers of oil and other commodities, computer chips and other industrial components, food and consumer goods. Restrictions hampering activities in Chinese ports could disrupt global trade.

Hu, the government spokesman, said officials traveled across China and held video meetings to ensure compliance with a list of 20 changes to anti-virus controls announced on Nov. 11. and narrowing the definition of who counts as close contact of an infected person.

Despite this, Guangdong’s provincial capital, Guangzhou, suspended access to the Baiyun district of 3.7 million on Monday. Residents of some parts of Shijiazhuang, a city of 11 million southwest of Beijing, were told to stay home while mass testing was carried out.

Economic growth recovered to 3.9% year-on-year in the three months ending September, up from 2.2% in the first half of the year. But activity has already begun to decline.

Retail spending fell 0.5% from a year earlier in October, retreating from the previous month’s 2.5% growth as cities reintroduced anti-virus controls. Imports fell 0.3% in a sign of weak consumer demand, a setback from September’s 6.7% increase.

Chinese exports contracted 0.7% in October after US and European consumer demand was squeezed by unusually high rate hikes by the Fed and other central banks to cool inflation that has been high for decades.

Entrepreneurs and economists see the changes in antivirus controls as a step toward lifting controls that isolate China from the rest of the world. But they say “zero COVID” may remain in effect into the second half of next year.

Guangzhou last week announced plans to build quarantine facilities for nearly 250,000 people. It said 95,300 people from another district, Haizhu, were taken to hospitals or quarantine.

Factories in Shijiazhuang were told to operate under “closed-loop management,” a term for workers living at their workplace. This entails costs for food and living space.

Entrepreneurs are pessimistic about the current quarter, according to a survey by researchers from Peking University and a financial firm, Ant Group Ltd. It said a “confidence index” based on responses from 20,180 business owners fell to its lowest level since early 2021.

The ruling party must vaccinate millions of elderly people before it can lift the controls that keep out most foreign visitors, economists and health experts say.

“We don’t think the country is ready to open yet,” Louis Loo of Oxford Economics said in a report. “We expect that the Chinese authorities will continue to refine COVID controls in the coming months, and later aim for a wider and more comprehensive reopening.”