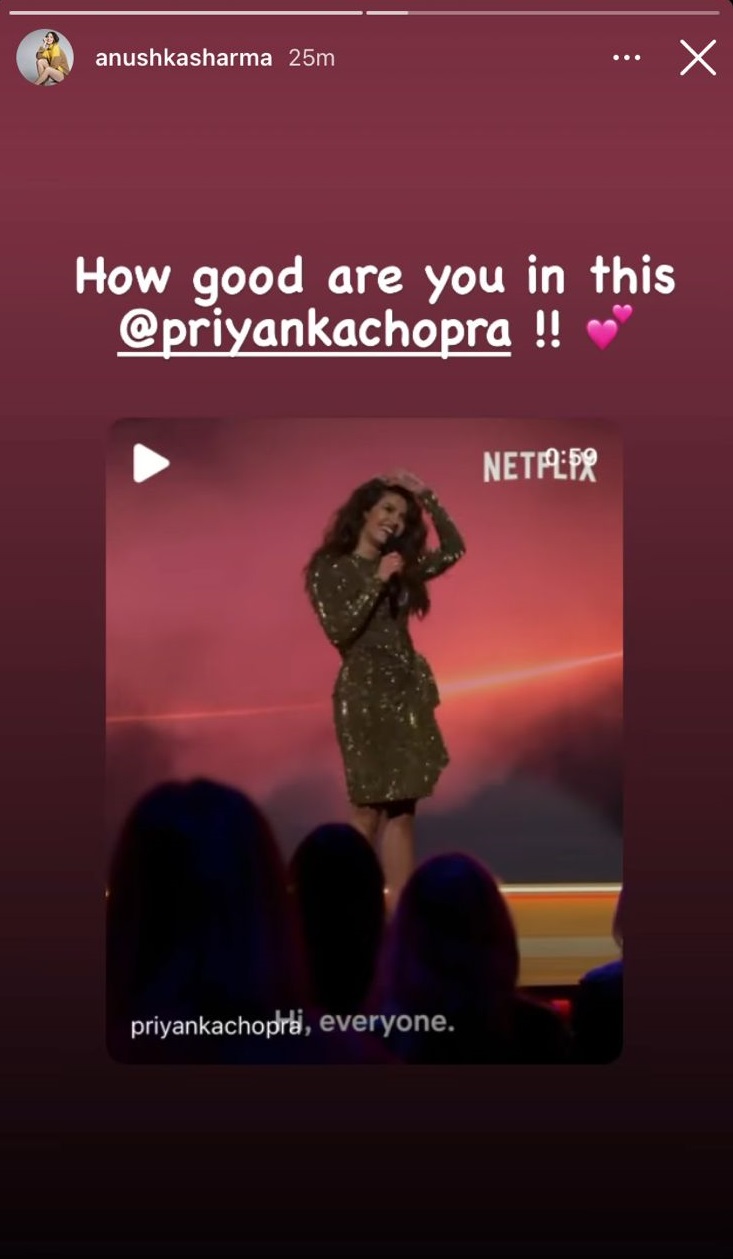 Priyanka Chopra made headlines when she deleted the last name “Jonas” from her social media on Monday, November 22. This decision sparked rumors of a divorce between the Desi Girl and the American singer-actor. The very next day, Priyanka put an end to all these rumors by sharing a clip of the “Jonas Brothers Family Roast” on her social media accounts in which the actress is seen searching her husband.

Anushka Sharma praised Priyanka by sharing the video on her Instagram Stories. The ‘Rab Ne Bana Di Jodi’ actor wrote, “How good are you in this @priyankachopra !! (Two Heart Emoji).” Anushka Sharma and Priyanka Chopra appeared together in Zoya Akhtar’s dysfunctional family drama “Dil Dhadakne Do”.

Earlier, Samantha Ruth Prabhu had also re-shared the video clip filed by Priyanka Chopra. And although she didn’t caption it, Samantha added an “amazing!” »Sticker to the story. The “Family Man 2” actor has been making headlines since announcing her divorce from South superstar Naga Chaitanya. Ironically, rumors of Samantha’s separation erupted after she removed her last name from her social media accounts.

As for the clip originally shared by Priyanka, the one-minute teaser video of the roasting session began with the “Fashion” actor introducing himself and saying “Hello, everyone.” I am honored and delighted in fact, tickled to be here tonight to roast my husband Nick Jonas, and his brothers whose names I never remember. “

ALSO READ  "Your core is made of steel casings": Anushka Sharma's birthday wish for her husband Virat Kohli becomes VIRAL

“Nick and I have a 10 year age gap. And there are a lot of references to ’90s pop culture that he doesn’t understand and I have to explain to him, which is good because we teach each other. . We teach each other things. He showed me how to use Tik Tok, for example, and I showed him what a successful acting career looks like, “she added at the end of the video.

Meanwhile, Priyanka Chopra and Nick Jonas’ PDA on social media is proof that all is well in their married life. On Nick’s workout video which was shared hours after their separation rumors began, Priyanka dropped a mushy comment that read, “Shit! I just died in your arms….”. The loving couple married at Umaid Bhawan Palace in Jodhpur in December 2018.

Nick Jonas to make his Bollywood debut? Here’s what Priyanka Chopra’s husband has to say

“Barfon Mein” is a journey of thoughts and ideas, according to singer Ravindra Singh

“How will we survive? Supreme Court Justice Sotomayor is sounding...