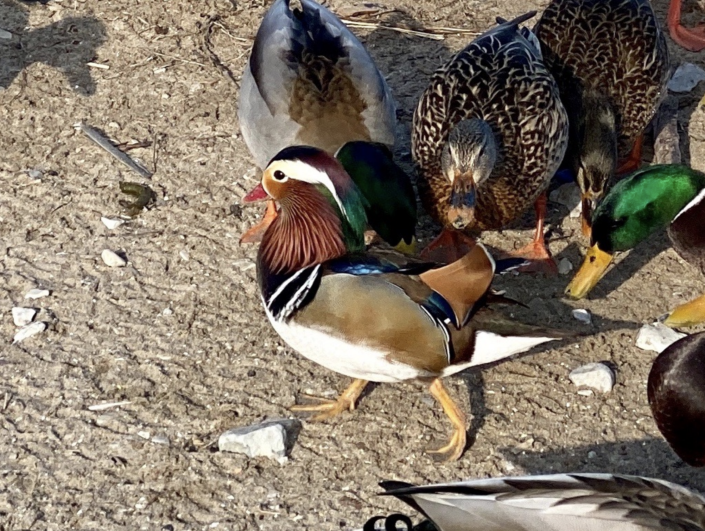 A photographer traveled from Appleton to Milwaukee on Wednesday hoping to spot the now-popular mandarin duck on the city’s waterfront. He accomplished that goal, but was also robbed at gunpoint at St. Francis de Sales Seminary.

Brent Balken is an Appleton businessman who got into wildlife photography about five years ago.

“I’m just really passionate about (wildlife photography) and I heard about the mandarin duck,” Balken said.

A mandarin duck was recently spotted in Milwaukee at the South Shore Yacht Club. The bird is native to East Asia and is likely an escapee from a zoo or private collection. The duck’s colorful feathers make for a great photo.

“I’ve even missed the mandarin duck a few times a day,” Balken said, adding that he’s traveled to Fond du Lac and Illinois in the past to try and spot the bird. “It would show up one day and be gone,” he said.

On Wednesday morning, Balken finally saw the bird and was able to take some pictures. “I was excited,” he said. “This duck was the star of the show. He always liked to be in the front.”

After taking pictures at the hunting club, Balken decided to go to seminary to take pictures of owls, which he has done in the past.

Balken pulled up the long driveway of the seminary before stopping in the parking lot. He was rummaging through his stuff in his backseat when he suddenly heard a car pull up behind him.

The next thing he heard was the voice of a young man saying, “I’ll take your gear.”

Balken said he turned around and a young man was standing with an assault rifle. Balken estimates that the man was between 19 and 25 years old. Balken said the man had something in front of his face.

ALSO READ  What happens to the money you don't use in your FSA?

Balken admits he “foolishly” tried to persuade the gunman to stop the robbery or do something worse.

“I could see his eyes. I looked into his eyes,” Balken said. “A few things went through my mind, this guy is scared and I don’t think he really wants to harm me.”

Balken said he made the decision to slam his back door and say, “No. You’re not getting this equipment.” The shooter asked Balken if his life was worth that equipment, to which Balken says he replied with the same question.

The gunman opened the door and seized an $80 device, Balken said.

Balken estimates he had more than $40,000 worth of equipment in the car, but for some reason the gunman returned to his vehicle and drove off.

“I was frozen; I couldn’t move,” Balken said. “It took me about a minute to 45 seconds before I could regain my composure, catch my breath, and call 911.”

The St. Francis Police Department responded to the scene shortly before 10 a.m., according to a department press release. In the release, police say they are actively pursuing leads and are asking anyone with information to contact them at 414-481-2232.

Our subscribers make this reporting possible. Please consider supporting local journalism by subscribing to the Journal Sentinel at jsonline.com/deal.