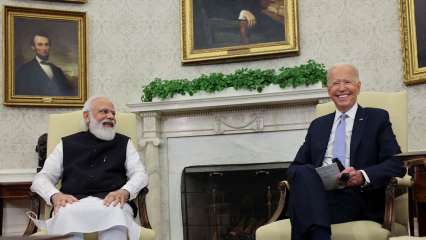 When Prime Minister Narendra Modi met with US President Joe Biden, not all conversations were work-related. They managed to take some time to talk to each other on a lighter note and discuss some family research.

It seems that this time around, the 46th US President Joe Biden was able to trace his family line and all the credit goes to Indian Prime Minister Narendra Modi who shed light on this matter.

Prime Minister Modi told Presiden Biden he had “chased away” documents that would shed light on the president’s ties to Mumbai, and brought his findings with him. Biden was quick to respond. “Are we related? He asked.

President Joe Biden explained that he heard about an Indian branch of the Biden family when he was first elected to Congress in 1972 and received a letter from someone called “Biden” living in Mumbai.

He said it was shortly after his first election to the US Senate. However, President Joe Biden said he never got a chance to follow the case and find out the truth about what the letter claimed.

The prime minister confirmed that the president does indeed have family ties with the subcontinent. “Maybe we can move this matter forward, and maybe these documents could be of use to you,” Modi told Biden.

ALSO READ  Pakistan is home to 12 terrorist groups, including LeT and JeM, US Congress report says

The context of the story

As Vice President of the United States, Joe Biden was in India and recalled the local press asking him if he had Indian parents.

He told the story of the letter. The next day, Biden said he was informed by the Indian press that there were at least a few Bidens in India.

“And although we never admitted it… I found out that there was a Captain George Biden who was a captain of the East India Tea Company in India,” Biden said.

It seemed to refer to the British East India Company, a trading power that ruled India over 200 years ago.

Joe Biden, who speaks frequently about his Irish ancestors, joked that the British connection was “hard for an Irishman to accept.”

The president said Captain Biden “apparently stayed and married an Indian woman,” but was never able to give more details.

He joked that Prime Minister Narendra Modi was in Washington “to help me understand”.