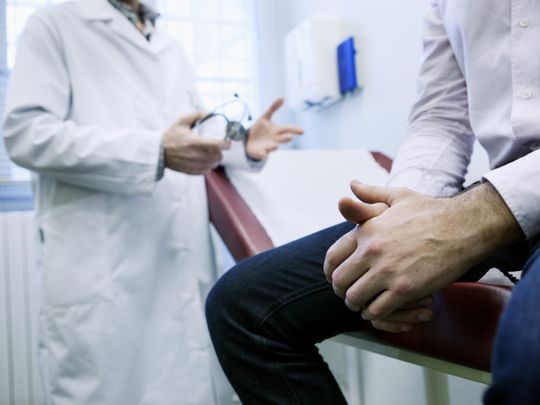 DUBAI: Carl Pittman, a British expatriate in Abu Dhabi, leads a very active life. He also takes care of his health very seriously, which means regular check-ups. And that includes routine prostate screening since he turned 50. So when prostate cancer struck Pittman, he wasn’t unduly worried. It was discovered at an early stage.

“I always knew that when you get to the age of 50, it is very important for a man to go for a PSA (Prostate-Specific Antigen) Test. In January 2019, I was diagnosed by Dr Rishikesh Pandya, head of the department and consultant urologist at NMC Specialty Hospital in Abu Dhabi. “When I was diagnosed with prostate cancer, I was fully prepared for the surgery,” said Pittman.

He’s now been cancer-free and has resumed work and normal outdoor activities like walking and swimming. Pittman is an exception in the UAE, where the incidence of prostate cancer was second-highest after colorectal cancer.

Men in the UAE and around the world are generally reluctant to undergo regular prostate screening. And this can be traced to a gap in perception and facts. There is also some hesitation and embarrassment for some men since the gland is linked to the genito-urinary system. Treatments for some prostate disorders can affect fertility. Prostate gland removal is viewed as a loss of manhood because of its link to the production of seminal fluid and reproduction.

The prostate is a small gland that is part of the male reproductive system. It is located inside the groin, below the urinary bladder and between the base of the penis and the rectum. Part of the urinary tract (urethra), which carries urine out of the body, passes through the prostate.

Since the gland surrounds part of the urinary tube, prostate problems can affect urine flow. The size of the prostate increases with age. In young men, the gland will be about the size of a walnut, weighing around 20 to 25 grams, and approximately 4 cm wide, 3 cm high and 2 cm thick. As they grow older, the gland could become the size of a table tennis or golf ball, weighing 30 to 35 grams. It could even grow to the size of a tennis ball or larger.

What’s the function of the prostate gland?

The gland plays a vital role in reproduction as it supplies prostatic fluid which forms an integral part of the seminal fluid (semen), which mixes with sperms produced by the testes. The prostatic fluid in semen helps the sperm travel down the urethra and survive the journey towards an egg. The prostate gland also helps control the flow of urine and semen.

What are the most common prostate problems?

Prostate problems are usually seen in older men. The most common issues are an inflamed prostate (prostatitis), an enlarged prostate, and prostate cancer. Prostate trouble may lead to pain difficulty in urinating, poor bladder control or weak urine flow.

ALSO READ  Do you live in Dubai but work in Abu Dhabi? Here's how residents manage their daily groceries despite entry restrictions

The size of the prostate can vary: a small prostate weighs 20-70 grams, and medium and large prostates can weigh up to 125 grams in typical cases. But after the age of 40, the gland begins to grow. The gland’s size can increase by 4 to 5 times if BRP afflicts a person.

The cause of prostate enlargement is unknown, but it’s believed to be linked to hormonal changes as a man ages. The balance of hormones in the body changes as one gets older, and this may cause an enlargement of the gland.

Men aged 40 years and older are more likely to develop BRP. A family history of enlarged prostates, medical conditions such as obesity, heart and circulatory disease, and Type 2 diabetes, lack of physical exercise and erectile dysfunction are other factors that raise the risk of BRP.

Prostate cancer occurs due to malignant growths in the gland as the cells multiply without control. Early detection can lead to a complete cure as some cancers remain inside the prostate (local stage). Most prostate cancers grow slowly, and some don’t grow at all. They are low risk and can be removed. Sometimes, it may grow back.

Some prostate cancers can be aggressive, posing a threat to life if it spreads to nearby organs (regional stage). They can also travel through blood vessels or lymph nodes to reach other parts of the body like the bones, and grow as new tumours. It is then called metastatic prostate cancer (distant). [Metastasis is the spread of cancer to new areas of the body through the lymph nodes or blood vessels. A metastatic cancer is one that has spread from its site of origin to other parts of the body.]

Prostate cancer is the second leading cause of cancer death in men in the United States, according to the American Cancer Society. Most prostate cancers (90 per cent) are found when the disease is in only the prostate (local) and nearby organs (regional).

Why is awareness necessary?

Awareness is the key to treating prostate cancer, and treatment is relatively easier in the early stages. Diagnosis is difficult since there are no symptoms in the first two stages. To make matters worse, an enlarged prostate and prostate cancer share many symptoms. So regular screening is the best way to fight it.

Regular screenings will happen only if the stigmas and misinformation about the gland are removed. And that requires awareness. It will lead more people over 50 to include prostate screening as part of their regular medical check-ups. And that will help early diagnosis.

A survey of 1,400 people (700 men aged 50-70 years, and 700 women) in six European countries (France, Germany, Italy, Spain, Sweden and the UK) and the United States), revealed a disturbing level of ignorance. Urinary problems were identified as a symptom of prostate cancer by 86 per cent of the respondents, but only 1 per cent of the sample size was aware that the disease could be asymptomatic.

What are the early warning signs?

What are the common tests to identify prostate cancer?

PSA is a protein made by the prostate, so measuring its level in the blood can help identify prostate problems. Men with prostate cancer have elevated levels of PSA in the blood, but other prostate conditions can also show higher PSA levels. The possibility of a false positive result is high, so a doctor may recommend a biopsy to confirm it. Levels of more than 4ngm/ml should need a more detailed discussion with uro-oncologist.

Digital rectal examination (DRE) is a physical examination by a doctor to feel the prostate through the rectum for any abnormalities.

Who is at risk of prostate cancer?

Should you get screened for prostate cancer?

US Centres for Disease Control and Prevention recommends that men who are 55 to 69 years old should decide after discussions with their doctors on the benefits and harms of screening.

Medical guidelines in the US don’t recommend routine PSA screening in men 70 and older. There may be less time for the condition to become life-threatening in these men, according to Harvard Medical School. Due to their limited lifespan, they are less likely to benefit from early detection.

Prostate cancer in the UAE

In the UAE, the incidence of prostate cancer was second highest after colorectal cancer. It accounts for about 12.5 per cent of new cancer cases among men, according to the Global Cancer Observatory’s report in 2018.

Urologists in the UAE feel that a lack of awareness and poor understanding of the problem are the underlying causes. Better awareness will lead to regular screening, and an early diagnosis will result in complete cure. The PSA tests are covered by insurance companies in the UAE, according to the NMC Hospital.

What are the treatments available in the UAE?

Hormone therapy is used only when cancer has reached stage 3 or 4. It will stop the production of testosterone (male hormone), which fuels the growth of prostate cancer cells. For men with intermediate-risk prostate cancer, hormone therapy is generally given for six months; for men with a high risk, it is usually given for 18–24 months. For non-cancerous issues with the prostate gland, hormone replacement therapy is used but has to be done under strict specialist guidance.

New minimal invasive methods of treatment for an enlarged prostate gland in the UAE include the following:

Minimally-invasive technique available in the UAE

Dr Dinanath Tharkar, consultant and head of urology at RAK Hospital, explained that the Rezum method is used to treat enlarged prostate with water vapour. It is available at Al Qassimi Hospital in Sharjah and RAK Hospital in Ras Al Khaimah.

Robotic surgery for prostate cancer is available at American Hospital Dubai. Dr Reinhold Zimmermann, a consultant urologist, says prostatectomy using the Da Vinci Xi robotic surgical system offers better precision because the surgeon has a 3D view. “There is no large incision needed, but only a few small cuts through the skin to insert the instruments into the body,” he added. “The robotic instruments provide the same range of motion like the human hand — unlike the instruments for a keyhole surgery, which offers very limited movement. This makes difficult surgical manoeuvres more precise, gentler, easier, faster and safer.

Tips to take care of your prostate

Adequate water intake for good urine output and sexual health and hygiene are necessary to prevent infections and inflammations. Some foods have been linked with reduced risk of prostate cancer, but there’s no adequate proof. In addition to eating a healthy diet, you should stay active and exercise regularly.

Canada-U.S. Student in Dubai gives face masks to UAE workers that will help them stay cool

The Bharat Express News - November 24, 2020 0
While generally synonymous with Christmas, John Lewis has also emerged as the one stop destination for Black Friday deals - and 2020 looks no...