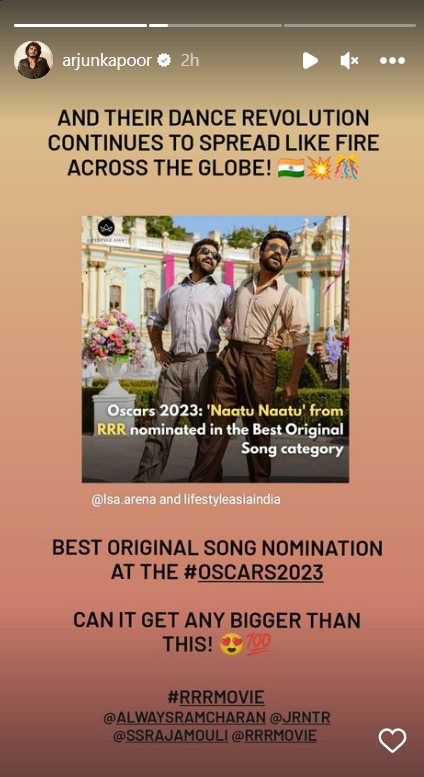 Actor Arjun Kapoor wrote, “And their dance revolution continues to spread like fire all over the world. Best original song nomination at the #Oscars2023. Can it get any bigger than this.”

Filmmaker Farhan Akhtar wrote, “Super excited to see that Naatu Nattu Best Original Song and All that Breathes – Best Documentary made it to the Oscar final nominations. Good luck.”

South actor Chiranjeevi tweeted, “ONE STEP AWAY FROM THE PEAK OF CINEMATIC GLORY!!! Congratulations on THE Oscar nomination for Best Original Song @mmkeeravaani garu & the visionary @ssrajamouli & the entire team behind #NaatuNaatu & @RRRMovie.”

ONE STEP AWAY FROM THE PEAK OF CINEMATIC GLORY!!!

Congratulations on THE Oscar nomination for Best Original Song @mmkeeravaani garu & the visionary @ssrajamouli and the whole team behind it #NaatuNaatu & @RRRMovie— Chiranjeevi Konidela (@KChiruTweets) January 24, 2023

In addition to RRR, the Indian documentary All That Breathes and the short documentary The Elephant Whisperers also received Oscar nominations for 2023 in the Documentary Feature Film and Documentary Short Film categories. (with input from ANI)