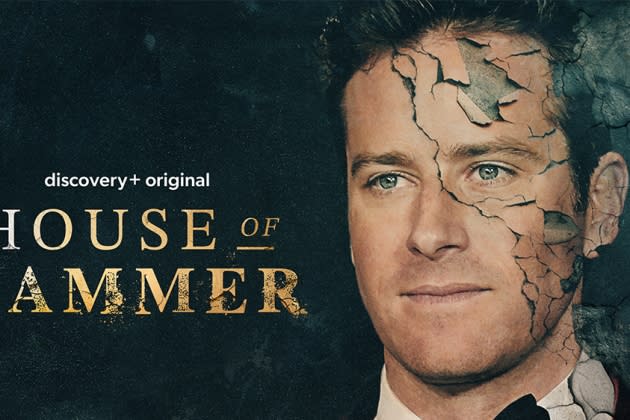 “House of Hammer,” a new Discovery+ documentary series on the sexual abuse allegations against Armie Hammer, makes a post-release change, removing an image of an alleged bite mark that one of the actor’s exes thought was a photo of her own body. Turns out the image in question appears to be a bite mark tattoo from Pinterest.

“He bites really hard,” Vucekovich says in “House of Hammer.” As she details the alleged bite, a photo of a bite mark is shown. In the document, Vucekovich says she believes the photo is of her body and was taken by Hammer.

“He says you should wear them like a badge of honor,” she says of Hammer’s alleged bite marks. “Almost as if he convinced me I’m lucky to have him. As screwed up as it sounds, at the time I interpreted that as love. Looking at it now makes me sick. He pushes your boundaries little by little.”

Shortly after the docuseries premiered, social media users on TikTok, Instagram and Twitter noticed that the image resembled that of a tattoo photo of a bite mark that originated on the internet and appears to have been found on Pinterest.

Now Talos Films, which produced ‘House of Hammer’, is in the process of removing the image from the docuseries, Variety has confirmed.

In a statement, the production company expressed its support for Vucekovich and Hammer’s other accusers.

“We take the responsibility to represent victims’ stories seriously. When new information about this series emerged, we immediately began investigating it and will make the necessary changes as soon as possible,” said a spokesperson for the docuseries in a statement obtained by Variety. “We are proud of those who came forward to share their truth with the public – including Courtney Vucekovich and Casey Hammer – and stand firmly behind the important message in this docuseries.”

Over the weekend, Vucekovich made a statement to People explaining that Hammer sent her the photo during their relationship and she believed the photo was an image of her own body.

“If you are bombed, you will receive multiple images in quick succession. During my time with Armie, I received numerous messages, including numerous images and videos. The bite mark shown was a photo Armie sent in our archived text thread and over a year later I believed it to be a photo of me as I have dozens of photos depicting his abuse on my body,” Vucekovich told the publication. . “I chose to tell my story to shed light on what I’ve been through in my relationship in the hopes that others don’t end up in the same situation.”

In “House of Hammer,” Vucekovich says that Hammer once left a letter in an envelope in her apartment building that reads “I’m going to fucking bite you” with his signature. An image of that photo (which has not been verified by Hammer) was also shown on screen.

In an interview held last week before the docuseries came out, the directors of “House of Hammer” told Variety that they were “rigorous in vetting” throughout their entire filmmaking process.

When asked about confirming the accounts of Hammer’s accusers, Julian P. Hobbs, who co-directed with Elli Hakami, said: Variety: “We always check our films through multiple lawyers. No film we’ve made has been better vetted than this one, because we had to get it right. It wasn’t just double purchasing; it was triple sourcing. It was like, “If in doubt, leave it out.” There was thorough research, archiving and legal review at every step of all the film’s materials. I’ll be honest, even up to two days ago we were replacing a photo because we weren’t 100% sure it was attributed to the right person and in the right place, and that we had permission to use it. “

Hammer has not responded to allegations in ‘House of Hammer’ and a lawyer for the actor has not responded Variety‘s request for comment when the docuseries premiered last week. However, the actor has previously and continuously denied all allegations. Hammer’s lawyer has stated that every sexual encounter has been “consensual, discussed and agreed upon and mutually participatory”.

Hammer was hit with sexual abuse allegations in early 2021, after a flurry of ‘cannibalism’ headlines dominated the tabloid media. He was then ousted by his agency, WME, and a string of high-profile projects, essentially evicted from Hollywood. That’s what a source close to the actor told us earlier Variety that Hammer was spending time in a treatment center in recovery after the public scandal. He currently has no projects in the pipeline and is the subject of an ongoing LAPD investigation, stemming from a rape allegation he categorically denies from one of his former partners named Effie. In an interview last week, Effie — who is represented by attorney Gloria Allred, who appears in “House of Hammer” — spoke out against the docuseries, saying, “The way they’ve exploited my trauma is disgusting… they make me sick. think of Armie.”

Alex Rodriguez on Jennifer Lopez marrying Ben Affleck: ‘I wish them all the best. … That is it.’