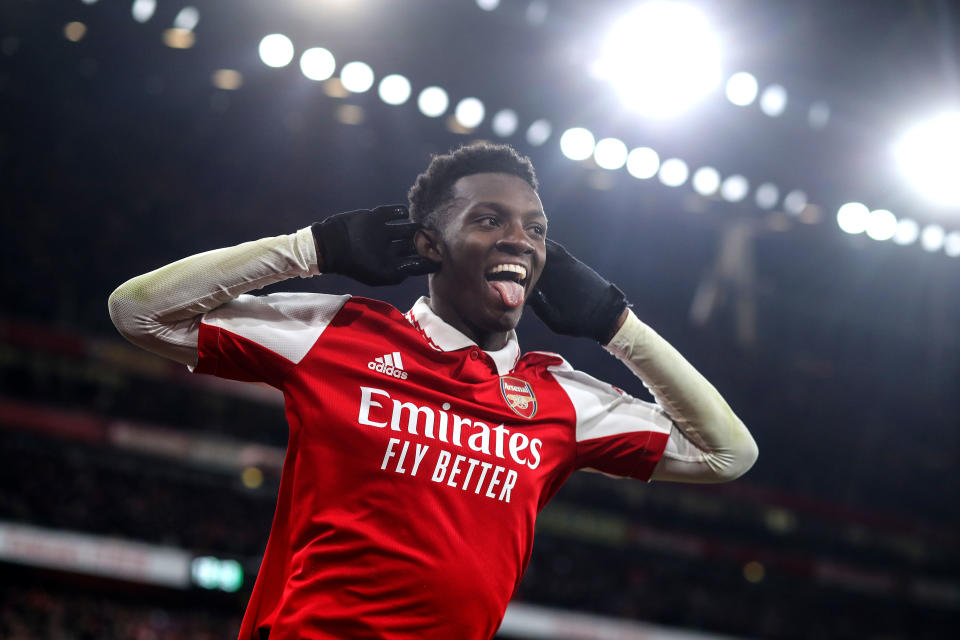 The balance of power in England’s Premier League began to shift long before a precious yellow ball floated towards Eddie Nketiah at the near post in the 90th minute of an instant classic.

They were level at 2-2, with United almost submerged and Arsenal disgruntled, when bodies converged at the penalty spot and that ball emerged, spinning to a stealthy Nketiah. He led it into a gaping net to give Arsenal a 3-2 win and set off an explosion.

He ended a captivating game with the dramatic conclusion it deserved and ushered in a new Premier League era.

Arsenal, whose relative mediocrity had been the butt of jokes for about a decade, had already built a somewhat impressive lead atop the league it hasn’t won since 2004. It had already entered its own new era, led by a young man in his twenties and a sharp manager, Mikel Arteta. They had effectively propelled Arsenal eight points ahead of the reigning king, Manchester City. They had proven themselves capable of fighting for a title.

ALSO READ  NFL Betting: The Miami Dolphins' total wins have gone up and down

But the rekindling of the Sunday rivalry that defined the turn-of-the-century Premier League spoke to something deeper, something bigger.

For nearly half a decade, the competition had largely transitioned into two-horse races and sometimes conceded to runaway winners. Manchester City and Liverpool had established a dual hegemony and neither seemed to be losing their grip. England, it seemed, had gone the way of Spain and other top European leagues, whose real contenders can always be counted on one hand, if not one finger.

ALSO READ  Mike McDaniel: I was told "from above" that we were first down before the game was delayed late

But England had only done this because Arsenal were wayward, and Chelsea were inconsistent, and United were mismanaged and directionless.

Sunday was Arsenal’s day, the punctuation of a turnaround, proof of concept for a remade team; but it was also about United’s return to prominence. It was generally a reminder that sleeping giants are, in fact, still giants.

Five, maybe even six clubs are financially able to compete for the Premier League title, and there are no longer just two clubs whose players, coaches and executives are capable of doing so. City and Liverpool walked away from the pack because they were driven by superior expertise, not just superior bank accounts; but they are not anymore.

Now they have worthy contemporaries. Now Liverpool’s stars have aged and the shrewd front office that brought them to the club is slowly crumbling. Key decision-makers and analysts have left. The Reds have struggled and slipped back to the center of the pack.

Arsenal, meanwhile, has risen faster than even its own diehard Gooners could have imagined.

United have finally stepped out of the Middle Ages and are effectively run as a modern football club. It has recovered from a disastrous start to the 2022-23 season. It has its own sharp manager, Erik Ten Hag, who seems skilled enough to lead United back to the top of football.

The Red Devils are a few years behind their old rivals, and it showed as Sunday’s second half progressed, after Lisandro Martinez’s brilliant header made it 2-2. Arsenal, a team of once disparaged veterans and transfer market bargains and exuberant youngsters, overwhelmed the Red Devils in the tense last 15 minutes of the game.

They ended up winning that match and controlling the title race. They are, it must be said, only halfway through and Man City make two more appearances on their calendar. They might still stumble; City remain the most fearsome team in the country by most analytical models.

But even if Arsenal’s drought continues beyond May, the era of the City-Liverpool duopoly is definitely over. There are new kids on the block, old clubs with new ambitions and faculties, each eager to define the next era.

‘While choosing the team..’: BCCI voter explains why Sarfaraz Khan was not selected for the Australian series