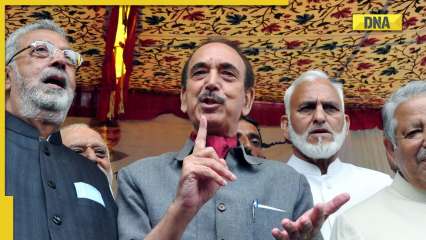 As he prepared to launch his political outfit, former senior congressional leader Ghulam Nabi Azad said on Sunday that Article 370 will not come back “in his life” and that he will not “fool people for electoral gains”. Azad, who resigned from Congress last month, addressed a rally in Kashmir as he set out his position on the now-revoked special status of Jammu and Kashmir. The former prime minister of Jammu and Kashmir also criticized political parties for misleading people into promising to bring back Article 370.

“Azad knows what can and cannot be done. I or the Congress Party or the Regional Parties cannot return Article 370 to you, nor can (TMC chief) Mamata Banerjee, or DMK or (NCP chief) Sharad Pawar,” the experienced valley leader was quoted as saying.

“Some people have said that I am not talking about Article 370. I want to tell them that Azad is not fooling people for electoral gain,” he said while addressing a public interaction at the Dak Bungalow Baramulla in northern Kashmir.

“I swear to God that I will not mislead you. I will not raise slogans or issues over which I have no control,” he said.

Azad said J&K’s special status can only be restored by a government with a two-thirds majority in parliament and that he will not raise issues beyond his control.

“The Congress Party has not been able to get more than 50 Lok Sabha seats in the past ten years. Let God help them. But I have been in politics and I don’t think Congress Party can get more than 350 seats in my life. Its strength is declining in Rajya Sabha with every state loss,” he said.

“Where can I get it? Where can I get those votes that are needed in Lok Sabha or Rajya Sabha? Why mislead people? So tell me who is lying? Me or them?” added Azad.