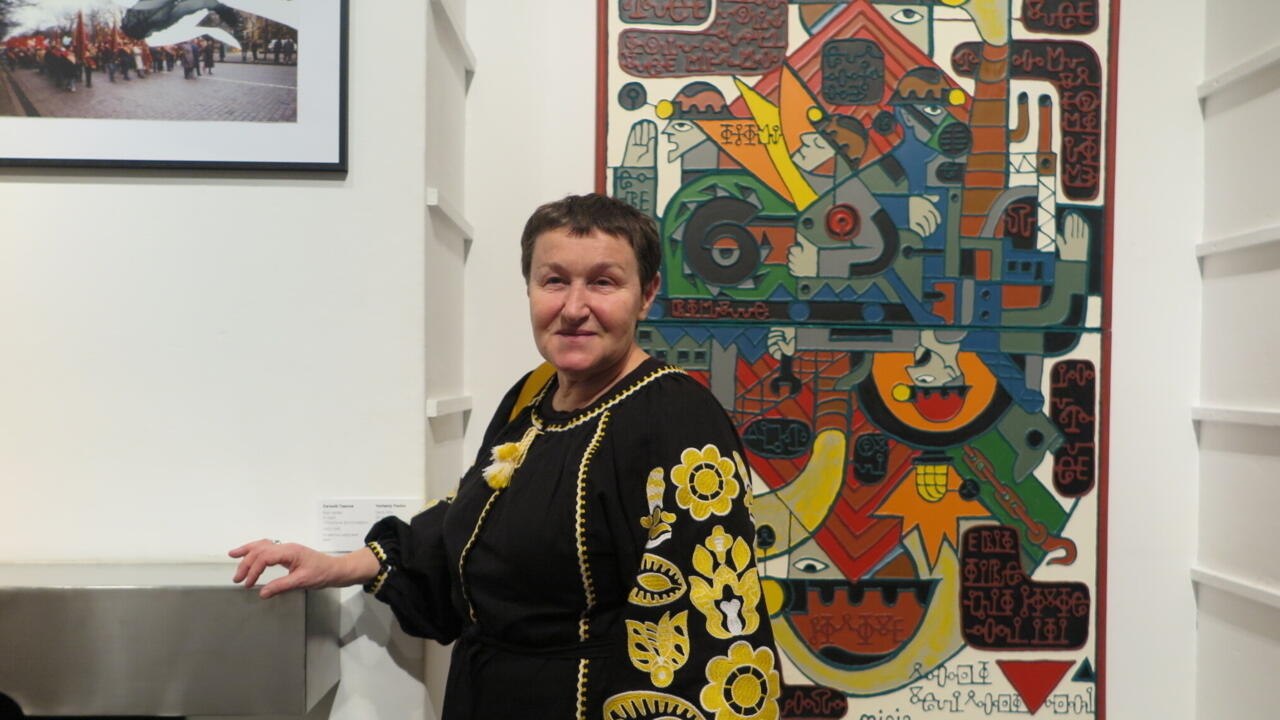 The exhibition ‘The Facets of Freedom’ at the Ukrainian Cultural Center in Paris is an ode to freedom, consisting of works that were evacuated in extremis from Ukraine to France after the Russian invasion.

The Ukrainian Cultural Center in Paris recently opened its doors to visitors for a preview of the exhibition ‘The Facets of Freedom’ (open to the public from January 19 to March 3). The works on display “are a manifestation of freedom, be it creative, physical, intellectual, sexual or emotional freedom,” said Viktoria Gulenko, the center’s director.

As the velvety notes of Beethoven’s “Moonlight Sonata” drifted in from an upstairs alcove on a video display, visitors peered at works from the private collection of Tetiana and Boris Grynyov. But while the individual pieces evoked freedom, the collection itself was part of a larger whole — that of the frenzied exodus of cultural workers across Ukraine to evacuate works of art after the Russian invasion last February.

The opening of the exhibition “Facets of Freedom” in Paris, January 19, 2023. © Grynyov Art Foundation

“The challenge for us was transporting the collections. It was our personal responsibility to save everything possible. We represent different regions and we had different experiences during the war depending on whether we were in Kiev, Odessa or Kharkiv,” Oksana Barshynova, deputy director of the National Art Museum of Ukraine, said during a roundtable discussion with several other art curators and collectors.

For the deputy director, the war in Ukraine did not start in 2022. It started in 2014 when Russia took Crimea. After Russia annexed the Crimean peninsula, Interpol, the international police organization, announced it was looking for 52 paintings by Ukrainian artists that the Russians illegally transferred to the Simferopol Art Museum in March 2014.

“Ukrainians started thinking about how to save art as early as 2014, but we faced numerous difficulties,” says Barshynova. Ukraine, with its 3,500 museums overseen by local, regional or national entities, has a disparate system. Many museums did not have an online inventory of their collections. With the government at war, many art professionals had to act on their own initiative to protect the country’s valuable art.

‘There was never enough tape’

For Maryna Konieva, art historian and curator of the Grynyov Art Collection in Kharkiv, it was a challenge to find packaging material for the art. There was never enough tape because it was used to cover shattered windows. Staff were hard to come by because “we had to find people willing to work under constant fire,” she said. Konieva also recalled wrapping a Soviet-era exhibit in carpets, “because that’s all we had”.

Barshynova recalled the evacuation of icons from the National Museum of Art of Ukraine: “Fortunately, we had packing materials” and “because of our cooperation with the Ministry of Culture, we had access to a bulletproof train on the Ukrainian National Railway,” she said. Russians fired on the train during the nerve-racking 12-hour journey, but the train’s armor saved the collection.

Dressed in a black and yellow vyshyvanka, a traditional Ukrainian embroidered shirt, art collector Tetyana Hrynyova had her own specific experience with her collection. “It was the Russian bombing and air raids that pushed us to leave Kharkiv,” she said. She further explained that her collections were stored in ordinary buildings. After a nearby building was bombed and her windows shattered, she knew it was time to evacuate.

“We didn’t have an armored vehicle, but we managed to evacuate our collection because we left discreetly,” Hrynyova said. “I am part of a club of private collectors and we have been discussing since 2014 what we would do in the worst case scenario. Private collectors are always ready to save their collections, but no one ever knows how they will react when faced with this. kind of situation.”

Maria, or “Masha,” Tseloieva, an art commissar from Odessa, recalled being “mobilized” on February 24 and 25 to evacuate pieces from the Odessa National Fine Arts Museum. She had recently terminated her contract after being employed since 2018, but the museum urgently needed specialists to pack the pieces.

She joked with her colleagues that “there’s no such thing as an ex-museum employee, because they can all be deployed at any time in the name of culture”. Everyone was in good spirits as they packed up the pieces; Masha attributed this to the fact that the inhabitants of Odessa are typically cheerful.

In the airy, high-ceilinged room at the Ukrainian Cultural Center, the pieces from the Grynyov family’s collection were testament to the struggle to save Ukrainian art. Calm and seemingly possessed by an eternal patience, Tetiana Hyrnyova walked from piece to piece, explaining the meaning and answering questions.

A work by Evgeniy Pavlov, one of the founders of the Kharkiv School of Photography. © Grynyov Art Foundation

In a work by Evgeniy Pavlov from 1970-1990, a black and white photograph of a naked man flying in the air was superimposed over a colored photograph of a crowd carrying Soviet Union flags during an International Workers’ Day parade. “This can be interpreted as a manifestation of sexual freedom,” Hrynyova said. The 1970 photo was not printed until 1990 due to its subversive nature under the Soviet Union.

In another piece, titled “Killed Dream” by Kyrylo Protsenko, a black object dripping a trail of blood, covered with a white sheet, recalls all the tragic loss of life that has taken place since the Russian invasion of Ukraine in February 2022 Dating from 1991, the painting gives the viewer an eerie sense of what the painter foreshadowed.

“For them [the Russians]Russian culture is the only culture that exists. That’s why they forbid our language,” Hrynyova said, measuring her words. “They think we draw strength from our cultural heritage, and of course we do.”

Hrynyova’s gaze softens as she turns back to the paintings. Her aim, she said, is to “end the false principle that Ukrainian art is of less importance”.

As Ukraine continues its grim existential struggle, observers can expect the country’s vibrant culture to continue to flourish.