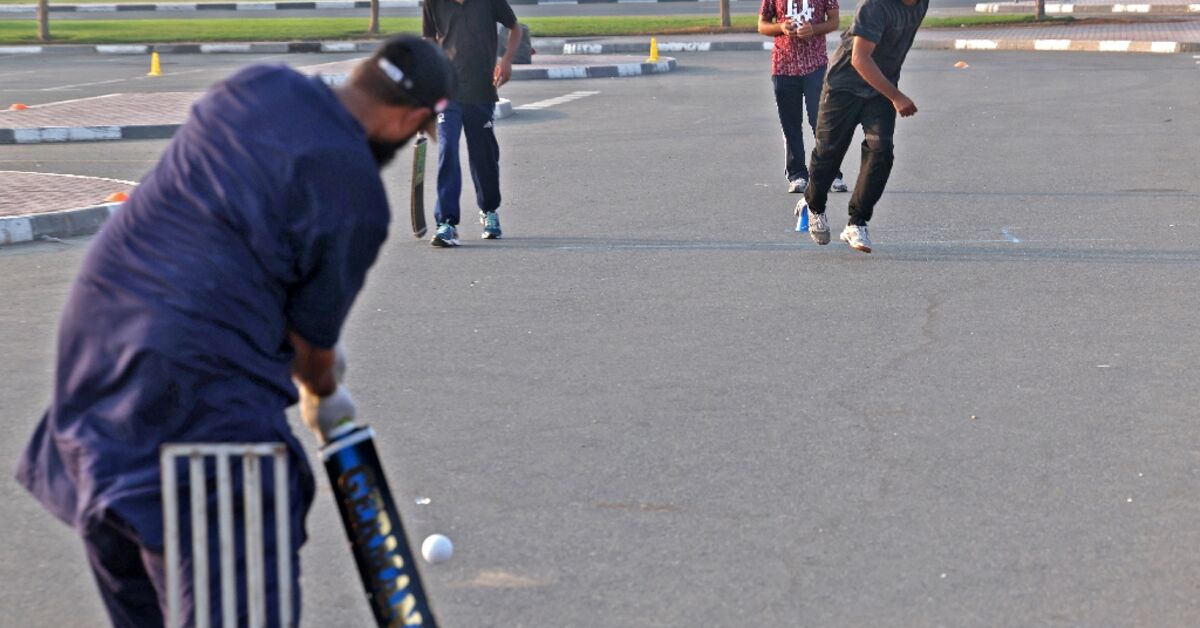 It’s 7 a.m. in Dubai, and as the sun rises over the high-rises, it reveals an animated scene below: about 200 people, mostly men, brandish bats and taped tennis balls in a weekly festival of street cricket.

There are about a dozen casual games going on in a parking lot near the city’s financial district, as subways pass over a bridge and police watch from a parked SUV, wary of players bringing alcohol or otherwise misbehaving.

Every weekend, such games are played on vacant lots in the Gulf region, home to millions of migrant workers and expatriates from cricket-loving South Asia.

And as the Gulf, namely Qatar, gears up to host the first football World Cup on Arab soil, another tournament dominated the conversations among players in Dubai: cricket’s Twenty20 World Cup, set in Australia.

Faisal, a 35-year-old Pakistani who drives, followed the tournament so eagerly that he almost crashed during India’s thrilling win over Pakistan in October.

“I almost had an accident – I was looking on my phone, watching the game between India and Pakistan,” he said. “We really like cricket.”

There is no doubt the main sport among the Gulf’s migrant workers, whose treatment has been in the spotlight in the run-up to the World Cup in Qatar.

Street cricket is often seen in Dubai, much more often than football.

This is due to the huge numbers of South Asians in the region, including an estimated 3.5 million Indians in the United Arab Emirates.

They make up about a third of the population and dwarf the indigenous population of about one million.

“We keep checking scores while we play cricket,” says Indian expatriate Dinesh Balani, 49. “While at work, in the bathroom or wherever, we watch cricket.”

A child’s play is going on in one corner of the parking garage, while in another an entire women’s team undergoes a coaching session.

Tennis balls wrapped in tape – to make them less bouncy, more like leather cricket balls for bowling and batting – hurtle across the asphalt, crash into curbs and roll under parked cars.

Balani, who works in real estate, said he had been playing street cricket in Dubai since 1995. He leads a team, the D-Boys, with 30 players on the roster.

He said cricket is an important outlet for many workers, often with boring or stressful jobs.

“Many of us are in between white and working class,” Balani said.

“But this is the only place where we let off steam. No one is there to boss us around. We are our own boss.’

Amreen Vadsaria, 22, who grew up in New Zealand and plays in the women’s team, says Virat Kohli from India is her favorite player. She can’t name footballers.

“I grew up outside of India and I never really had any interest in cricket. But I think[playing street cricket]has made me want to follow cricket more,” she said.

“And because it’s such a big thing in my country in India, I think it’s brought me closer to my culture.”

ALSO READ  The security briefing: The Pentagon is trying to reason with Turkey

The players and their games have itinerant histories, moving from place to place as Dubai’s rapid development turns their makeshift cricket grounds into tower blocks and shopping malls.

Meanwhile, the UAE has become a fixture in professional cricket, hosting Pakistan’s home games for a decade after a 2009 attack on the Sri Lanka team in Lahore.

India’s glitzy IPL Twenty20 league moved to the UAE for two years during the Covid-19 pandemic, and the oil-rich country also hosted the Twenty20 World Cup last year, along with several Asian Cups.

While the UAE’s South Asian population provides a ready-made fan base for major tournaments, the weekly cricket also acts as the glue for the community, Balani said.

“This is what we’ve been doing since the age of five. We started playing and have never stopped since,” he said.

“So this is not just cricket, this is kind of a family gathering for us,” he said.

The Takeaway: Xi’s trip to Saudi Arabia sends a message to the US