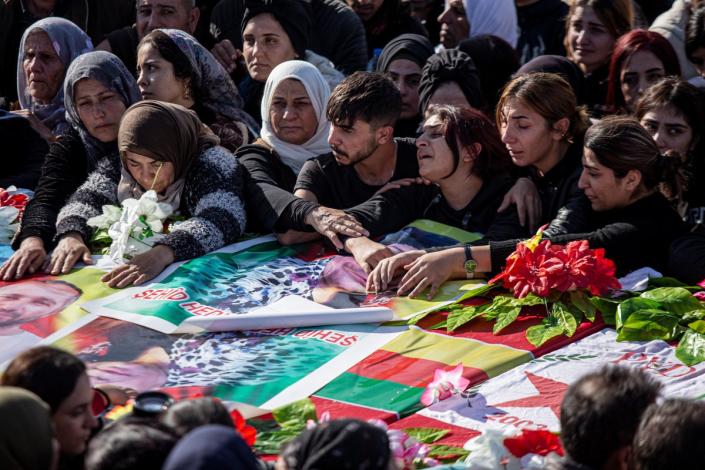 The Kurds in the Middle East are bombed, shot at and arrested in four countries. Dozens of people have been killed in political unrest in northwestern Iran. About two dozen have been killed in airstrikes on northern Syria. And both Tehran and Ankara threaten ground invasions that will kill and displace even more.

It is an unprecedented moment of pressure on one of the world’s largest stateless ethnic groups. It came about in part because of the war in Ukraine and the international withdrawal from the region.

Turkey and Iran are stepping up pressure and increasing violence against the Kurdish population in their own countries, as well as in Syria and Iraq. In response to a November 13 bombing, Turks have launched cross-border airstrikes and are preparing for a possible ground invasion of Kurdish-controlled regions in northern Syria, and have attacked positions of Kurdish militant groups in Iraq. Ankara has also stepped up pressure on the country’s main Kurdish-led political party.

Iran is sending heavily armed ground troops to crush part of a nationwide political uprising in its own Kurdish towns and cities. In a video clip posted to the internet, pro-regime gunmen can be seen attacking unarmed protesters in the town of Javanrud, opening fire wildly while shouting, “God is great!”

Like Turkey, Iran also launched missiles against Kurdish rebel groups across the border in Iraq, using drones and fighter jets in an attack early Sunday that was at least the second in recent weeks.

“We are seeing Turkey and Iran continuing to bomb Iraq and Syria at a volume and pace that we have not seen in a while,” said Hetav Rojan, a security expert in Copenhagen.

Although simultaneous, there is little evidence of direct coordination between Ankara and Tehran in attacking Kurds. But there is likely a tacit understanding between the two nations, and Iran has likely given Turkey the go-ahead for its attack on northern Syria.

Analysts say domestic political calculations in Ankara and Tehran as well as geopolitical shifts are fueling the confluence of violence and political pressure.

“This is one of the rare moments when Iran and Turkey see what is happening to them as an existential threat to the Kurds,” said Abdulla Hawez, a London-based Kurdish affairs analyst. “Each country used to use the Kurds against each other. What is happening now is similar in both countries.”

Both Tehran and Ankara view Kurdish aspirations as a long-term threat, and both share a long history of abuse against the group, which numbers between 30 million and 45 million and is spread across parts of southeastern Turkey, northern Syria, northern -Iraq and northwestern Iran. .

“For both Ankara and Tehran, it is incredibly valuable to have an archetype of an external enemy cultivated by decades of minority marginalization to shift the blame for internal misery,” Rojan said.

Turkey has denied basic cultural rights to the Kurds for much of the 20th century and has been waging war against the Kurdistan Workers’ Party (PKK), a banned separatist group, since the 1990s. Ankara accuses the PKK’s Syrian affiliates in the self-governing region of Rojava of being behind the deadly bombing of a shopping district in Istanbul this month, which killed six people.

Airstrikes on Syrian and Iraqi positions by PKK members killed at least 31 people on Sunday evening and Monday morning. Ankara has warned it is preparing a possible ground invasion of northern Syria, sparking concerns from Moscow and Washington.

Turkey faces crucial elections next year in which the country’s Kurds will play a major role in denying or ensuring the re-election of President Recep Tayyip Erdogan. If the Kurds embrace Erdogan’s opponents, it could cost him his leadership.

Increasing pressure on the ethnic group could exacerbate divisions between Kurds and an opposition that has often shown even more hostility to Kurdish aspirations than Mr Erdogan’s Justice and Development Party (AKP).

“Erdogan is trying to drive a wedge in the opposition,” Hawez said. “One of his strategies will make it very difficult for any opposition to get close to the Kurds.”

Turks have been signaling a possible ground invasion of northern Syria for months to wrest control of the city of Kobani from the Kurds. Storming the city of perhaps 100,000 just seven months before the June 23 elections carries risks, but could also bring political rewards. “The likelihood of Turkey attacking Kobani is very high for several reasons,” said Kaveh Ghoreishi, a Berlin-based journalist specializing in Kurdish affairs. “Erdogan hopes that this war will mobilize the nationalist body of society. in his advantage.”

While Iran is more tolerant of Kurdish language and culture, it has also fought against Kurdish rebel groups and has been accused of discriminating against Kurds, who are mostly Sunni Muslims in a country dominated by Shiite Islamic clerics. Kurds have played a prominent role in the ongoing 10-week nationwide uprising sparked by the death in custody of 22-year-old Mahsa Amini, a Kurdish woman abducted by vice squads while visiting Tehran.

Shows of unity between Iranian ethnic Kurds, Baluch, Persians and others within the nationwide movement have upset Tehran. Public displays of inter-ethnic and sectarian solidarity pose a particularly stark threat to a clerical regime that has largely relied on the fear of separatism and civil war to keep its opponents divided and its supporters united.

“It is not often that Kurdish and Baloch minorities are involved in Iranian protests because of the ethnic and political divide between majority and minority groups,” Rojan said. “This raises the bar for Tehran, which is quickly seeking perceived external enemies to shift blame and demonstrate assertiveness.”

The regime in Tehran has viewed Iraqi Kurdistan with growing suspicion as the self-governed region has improved ties with the United States and Israel. Although Tehran has collaborated with the PKK and its affiliates in the past, it is furious about the group’s influence on the protest movement. The slogan ‘Woman, Life Freedom’, the rallying cry of the uprising, is rooted in the left-wing politics of the PKK.

“It is concerned about the further reverberation and consequences of this slogan, and for this reason Iran has given Turkey the green light to attack Rojava,” Ghoreishi said.

Iran’s use of extreme violence against ethnic Kurds is likely to provoke a reaction from Iraq-based armed rebel groups and lend credence to the narrative that the protests will lead to national dissolution.

Dozens of civilians have been killed in Iranian attacks on Iraqi Kurdistan in recent weeks,

hundreds of people have been injured and thousands have been driven from the cities, Mr Ghoreishi said. So far, none of the groups, including the Kurdistan Democratic Party of Iran, a leftist group called Komola, and an Iranian branch of the PKK, have taken the bait.

“The Kurdish armed opposition groups are aware that if they took any material action, it would completely play into Tehran’s hands,” said Mohammad Salih, a Washington-based Middle East analyst specializing in Kurdish affairs. . “That would derail the uprising.”

The attacks come at a time when the West and Russia are distracted by the conflict raging in Eastern Europe. Russia has a military presence in northern Syria and is the main benefactor of the Syrian regime. The United States has a military presence in both Iraq and Syria, where it partners with Kurds in ongoing efforts to defeat Isis remnants. But both Moscow and Washington have been largely silent about the Iranian and Turkish attacks on Kurds.

“The wider regional power vacuum has presented an opportunity,” Salih said. “Until a few months ago, the US had something strong to stay with. In the case of Syria before the Ukraine crisis, we could have expected a country like Russia to say something. But they’re pretty quiet.”

Protests of strict lockdown hit Shanghai and other Chinese cities

Was Elon Musk’s takeover of Twitter predicted by Simpsons in 2015? This is what happened