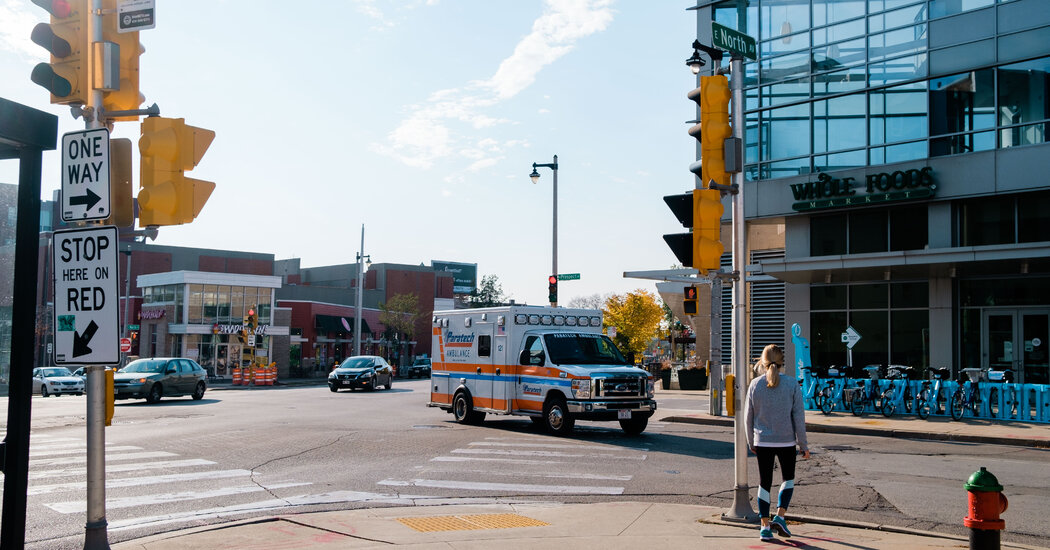 WEST ALLIS, Wisconsin – A hospital in Idaho is 99% full and warns it may need to transfer coronavirus patients to hospitals in Seattle and Portland, Oregon. Kansas City, Missouri, medical centers turned down ambulances a recent day because they didn’t have room for more patients. And in West Allis, just outside Milwaukee, an emergency field hospital erected on the grounds of the Wisconsin State Fair admitted its first patient with the virus this week.

More than 41,000 people are currently hospitalized with the coronavirus in the United States, a 40% increase over the past month, and cooler weather that pushes more people indoors threatens to spread the epidemic even further. At least 14 states saw more people hospitalized with the virus on any day last week than on any other day in the pandemic, according to the Covid Tracking Project. Seven more states are nearing their peaks.

The country has seen more people hospitalized at earlier times – in an attack of cases in New York in April and in the Sun Belt in July – but the surging number is now deeply worrying, in part because they test the limits of smaller hospital systems.

Patients are now spread more widely across the country, with troubling hot spots from North Dakota to Kentucky. More people than ever are falling seriously ill in rural areas, especially the Midwest and Mountain West, where they have to rely on hospitals that have only a handful of beds. And experts fear the growing number of people in need of hospital care will only get worse if cases continue to rise.

“I really don’t see any signs that things are slowing down and that concerns me a lot,” said Caitlin M. Rivers, epidemiologist at Johns Hopkins University. “We have to assume that it won’t slow down unless we force it to slow down.”

Even though hospitalizations and known cases of the virus have increased, daily deaths across the country have remained fairly stable at around 760 in recent days. But some experts fear the death rate will start to rise again. Increases in deaths typically lag behind increases in cases and hospitalizations due to the time it takes for the virus to progress.

For families across the country, the growing hospitalizations were frightening – and personal. Among the thousands of patients were a retired Air Force lieutenant colonel struggling to catch his breath in Missouri, grandparents treated at separate hospitals in Utah, and a beloved uncle whose niece said he had been on a ventilator for five weeks in Wisconsin.

Amy Stadler, the niece, sat in a black van outside the Milwaukee Brewers stadium this week as she waited for a nurse to rub her nose. She said relatives have collected messages for her uncle – who is seriously ill – to share if his condition becomes even more difficult. Ms Stadler, 49, said she sent hers: “That I love it and can go.”

In recent days, Ms Stadler, who works as a teaching assistant, has started to cough and has a fever. “I’m careful, but there are a lot of people who aren’t,” she said quietly behind her face mask as she awaited her exam.

Signs of a hospital space tightening were painfully clear in several states.

“Make no mistake, this is an urgent crisis,” Governor Tony Evers of Wisconsin said of the state’s outbreak on Thursday.

In recent months, field hospitals have opened in several cities, including Seattle and New York. Some have closed after seeing only a small number of patients, if any. But in Wisconsin, Secretary-designate for Health Andrea Palm said hospital officials made an “urgent appeal” as more patients arrived at their doors.

The 530-bed field hospital at West Allis, she said, is the state’s “ultimate insurance policy”. The hospital was built inside the fairgrounds, a brick building the size of three football fields where the fair is, most of the time, a busy event. Inside the hospital, hundreds of white cabins are lined up one after the other, each with little more than a bed, a trash can and a curtain for more privacy.

“Our health care system is at full capacity, our health care providers are overwhelmed and exhausted, our public health system is under stress,” said Dr. Angela Dunn, state epidemiologist.

“I don’t know what to do anymore,” added Dr Dunn. “I’m really not trying to scare anyone, I’m just trying to let you know what’s going on.”

Gov. Gary Herbert said the state was preparing to open its own field hospital at an exhibition center south of Salt Lake City. One in five patients in the state’s intensive care units is a Covid-19 patient, he said.

In separate Utah hospitals – about 20 miles apart – Rebecca Hannett’s grandmother, a 79-year-old retired bus driver, feels better, but her grandfather, who is 85, is not, said Hannett. Isolation and separation from hospitalization with Covid-19 has added to their fight against the disease.

“My grandmother called us yesterday because she is worried about our grandfather,” said Ms. Hannett, 22. “He’s sort of decided that if it’s the end, it’s the end. And my grandmother is just afraid they can’t say goodbye to each other. “

In some rural areas of the country, hospital officials have to act “almost like air traffic control,” moving around patients to open beds, said Dr David Basel, vice president of the Avera medical group, based in South. Dakota and operates about three dozen hospitals in the Midwest.

“Our regional hospitals are all operating at full capacity or almost every day,” said Dr Basel.

One in four of the patients currently admitted to the group’s hospitals are Covid-19 patients, Dr Basel said, a proportion that could increase if the infection rate remains high. As more patients arrive from rural areas in the region, he said, he feared hospitals would have to cancel cancer screenings, back operations and other elective procedures to to make room.

As the pandemic continues, hospital officials said they were more concerned about a shortage of workers than physical supplies. Unlike when the virus was largely concentrated in New York and the Northeast, when medical workers arrived to help from across the country, the virus is now more widespread, which means few nurses or doctors arrive to help.

“It feels more like a slog that we go through, rather than something that we can come together and quickly overcome,” said Nancy Foster, vice president of the American Hospital Association. “There aren’t that many people who can leave their community to help in another because they are having a hard time staying in their own community.

Karina Brown, a nurse, has been helping treat patients infected with the virus at Aurora Sinai Medical Center in Milwaukee since the start of the pandemic. Even though she felt prepared for the influx of patients, it was still a shock when they arrived.

“We had a plan, but once you really saw it and it was time to go, it’s a little different,” Ms. Brown said.

Now she is assigned to more patients and they are, on average, much sicker, which means she has to watch and treat them more often. She and other nurses have also become, in many cases, one of the few links between patients and their loved ones who are not allowed to visit. This brought her closer to her patients, but also makes her more painful if they succumb to the disease.

“We are their person while they are here,” Ms. Brown said. “Because they are all alone.”

She added, “You get to know people, and you have to sit by the bed with them and hold their hands because their families might not be able to come.”

COVID-19 vaccine: Who will be the first to get it, which one, when?

How archaeologists are using deep learning to dig deeper

My name is GPT-3 and I approved this article

Susanna Reid screams when Dr Hilary Jones ‘gets too close’ to...

Natalie Portman looks cool as she refuels her car at Bondi...

Susanna Reid screams when Dr Hilary Jones ‘gets too close’ to...