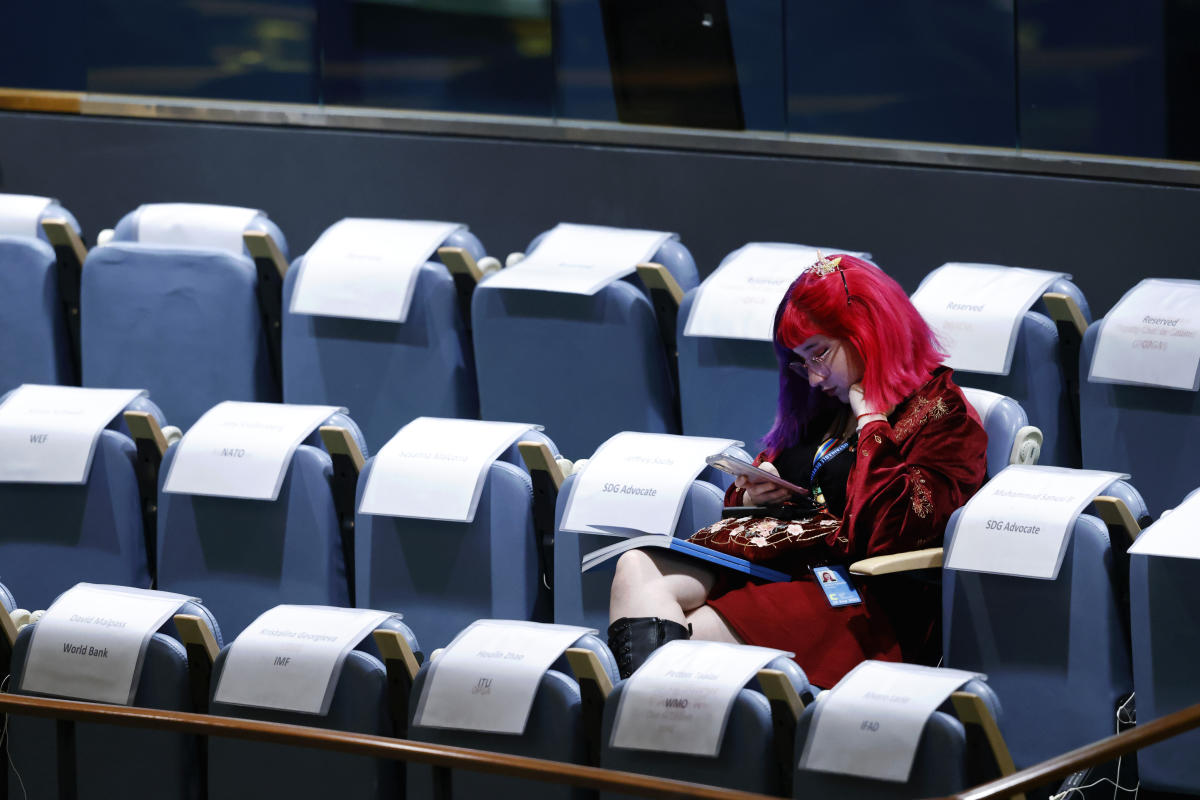 UNITED NATIONS (TBEN) — The head of the United Nations had just warned of a world gone all wrong — a place where inequality was on the rise, war was back in Europe, fragmentation was everywhere, the pandemic was setting in and technology was tearing things apart as much apart as it united them.

“Our world is in big trouble. The dividing lines are getting deeper. Inequality is growing. The challenges are expanding,” Secretary-General Antonio Guterres said Tuesday morning as he opened the general debate at the 77th UN General Assembly. And he was undeniably right in every way.

But barely an hour later, two UN delegates – one Asian, one African – were here grinning and standing in the sun-drenched lobby of the UN Secretariat building, excited to be there in person on this particular morning as they snapped pictures of each other, laughing. as they captured the moment.

Hope: It can be hard to find anywhere these days, let alone the people who walk on the floors of the United Nations, where bearing the weight of the world is central to the job description. After all, this is an institution that last year listened to the president of the not-yet-war nation of Ukraine describing it as “like a retired superhero who has long forgotten how great they once were.”

And when world leaders try to solve some of humanity’s thorniest problems — or, frankly, sometimes get in the way of solutions to those same problems — it’s easy to lose hope from afar by the haze of negative adjectives.

But beneath the layers of existential gloom Tuesday — and this is no doubt a pandemic-depleted group of people representing a world in a very bad mood from so many troubling challenges — there were signs of clarity that permeated like persistent clovers in the cracks of the sidewalk. .

“For each of us, the UN is a unique platform for dialogue and cooperation,” said Swiss President Ignazio Cassis. Philippine President Ferdinand Marcos Jr. said his country is an “optimistic” nation for whom “solutions are within reach”. our collective grasp.”

And David Kabua, president of the ocean-besieged Marshall Islands—a man who today has little reason to express optimism—came to the United Nations and spoke of “this iconic hall, the symbol of humanity’s hopes and pursuit of world peace, prosperity, and international cooperation.”

There were many more moments like that on Tuesday. Taken together, they are remarkable: there seems to be a collective sense—repeated by leader after leader in various, sometimes oblique ways—that even when it disappoints or falters, the United Nations should be a place of hope amid the cold pragmatism.

Why is that? Part of that is the unwavering commitment since the very beginning of the UN to the principle of multilateralism, a $10 word for playing nice with each other. And to play nice when your feuds are old or bloody or seemingly insurmountable – to even try – requires hope.

However, that has always been true. There is also something else, something unique about this year, about this moment. In the terrifying early pandemic days of 2020, the UN General Assembly was all virtual and leaders stayed home and made videos. Last year, despite the theme of ‘Building resilience through hope’, the hybrid General Assembly resulted in a spotty turnout of the leaders and little sense of the coming together of the world.

Now, although the pandemic continues, the UN grounds are living with people from most backgrounds and traditions on the planet, interacting and talking to each other and generally doing what the United Nations was built for – taking nations and turning them into people. , as the late Senator William Fulbright used to say.

Even when there’s nothing to worry about, they’re doing what the whole outfit was designed for: figuring out little by little what the world should look like.

“It’s the only place in international organizations where this effort is being made to define what is collectively shared,” said Katie Laatikainen, a professor of political science and international relations at Adelphi University in Garden City, New York, who studies the United Nations.

“They’re trying to figure out what it means to be part of the international community,” she says. “They have learned the language to appeal to the ‘we’ and it encourages others to define the ‘we’ and commit to the ‘we’.”

Guterres made sure that sensibility was infused as he opened proceedings with his ominous speech. He told of a ship called the Brave Commander, loaded with Ukrainian grain and – aided by the warring nations of Ukraine and Russia – bound for the Horn of Africa, where it can help prevent famine.

It flew a UN flag, and Guterres said it and the dozens of ships that followed weren’t just carrying grain; they carried “one of the rarest commodities of today” – hope.

“By acting as one,” he said, “we can nurture fragile shoots of hope.”

So no: Hope is not absent from the United Nations this week. That much is certain. It’s contained, it’s muted, it’s provisional. But it’s there, gossamer as it may be – even if some may find the idea naive. “Our chance is here and now,” said the President of the General Assembly, Csaba Kőrösi from Hungary.

After all, the world is not an easy place. Was it ever? That was understood by the second Secretary-General of the United Nations, Dag Hammarskjöld. “The United Nations was not created to take us to heaven,” he said, “but to save us from hell.”

Ted Anthony, TBEN’s director of new storytelling and newsroom innovation, has been writing on international affairs since 1995 and has oversaw reporting from the UN General Assembly since 2017. Follow him on Twitter at http://twitter.com/anthonyted and, for more TBEN coverage from the UNGA, visit https://apnews.com/hub/united-nations-general-assembly

Huge power crisis in Bangladesh: know how a power outage left 130 million people in the dark

Can Biden Save Democracy One U.S. Factory Job at a Time?