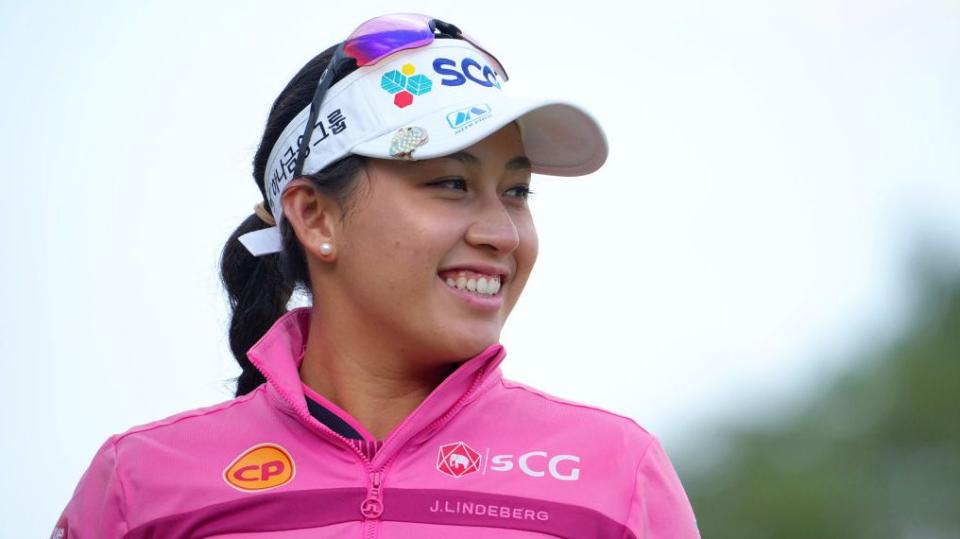 To say that Atthaya Thitikul has enjoyed a breakthrough as a rookie LPGA season is a bit of an understatement, but keeping it low key is just how 19-year-old “Jeeno” likes it.

At the end of the 2022 season this week at the CME Group Tour Championship, Thitikul has already captured two LPGA titles, taken the No. 1 ranking in the world rankings and bagged the Louise Suggs Rolex Rookie of the Year award. But the current world No. 2 shows a wise-for-her-years ethos when she says she’s most proud of her mindset this season.

“[I’m]19 years old – I think I’m still young to handle all the things I have right now,” Thitikul told On Her Turf ahead of this week’s season finale in Naples, Florida. “I didn’t say I got it right done, but i just said i think i can handle it. I can do it. And yes, it worked out quite well this year.”

To keep herself in check, the Thai native keeps her philosophy on her Instagram profile, which reads, “Be yourself, be happy and everything will be fine.” Thitikul, who joined the 18-time LPGA winner on October 31 Lydia Ko as the only players in tour history to reach No. 1 before their 20th birthday, she said she took stock of poor performances on the golf course and found they all had one thing in common: she wasn’t herself.

“I wasn’t having fun,” she says of those unsatisfactory rounds. “I was expecting a lot of results on the golf course, not really talking, not really enjoying it. So I think being myself, having fun, keep smiling, keep laughing and talking to other players or talking to my caddy, joking around – I think that’s the best I can do.

Golf has always been fun for Thitikul, who grew up in the north east of Thailand and was introduced to the sport at the age of 6 through her father and grandfather, both of whom were not golfers themselves, but recognized the opportunity that golf could offer. Thitikul teases that her grandfather had a crush on Tiger Woodsbut after her first golf experience with a pro in Bangkok, she was also hooked.

“They asked me when I finished practicing, do I like it? And I say, ‘Yes, I do.’ Because [there were] lots of friends and when I practice it seemed like fun and not like other sports I’ve seen on TV,” she recalls.

Thitikul’s rise to the top of her sport was swift: in February 2017, just three days after her 14th birthday, she made her first LPGA tournament appearance at the Honda LPGA Thailand, finishing 37th out of 66 players. Just five months later, Thitikul made headlines when she became the youngest person ever to win a professional golf tour event at the age of 14 years, 4 months and 19 days old, winning the Ladies European Thailand Championship on the Ladies European Tour (LET) .

For another three years, Thitikul resisted turning professional, racking up multiple amateur international victories and plenty of touring experience, earning her first LPGA top-10 finish in March 2018 at the HSBC Women’s World Championship (T-8) and earning low amateur honors to match the same years at two majors, the ANA Inspiration (T-30) and Women’s British Open (T-64). The following year, she won the Ladies European Thailand Championship for the second time in three years, earned low amateur honors at the British Open (finishing T-29) for the second year in a row, and was No. 1 at the Women’s World Amateur Golf ranking. .

In her first year as a pro, during the pandemic-ravaged 2020 season, Thitikul broke through for her first professional win in July at the Thai LPGA Championship. She finished the season with five Thai LPGA wins and topped the money list.

Thitikul moved to the LET in 2021, won the Czech Ladies Open in June, and just a month later moved into the top 100 in the world rankings at No. 89 for the first time. She ended 2021 with two wins, three runner-ups and nine additional top-10 finishes, securing the LET Order of Merit and Rookie of the Year titles, becoming just the fourth player to win both awards in the same season.

After finishing third in the LPGA Qualifying School to earn her 2022 card, Thitikul has not missed a beat in her meteoric rise this season. She posted two top-10s in her first four starts before signing a personnel deal with Callaway, who she followed up by winning her first LPGA title at the JTBC Classic in March. She carded an 8-under 64 in the final round to force a playoff and Nanna Kurtz Madsen on the second additional hole. She earned her second LPGA title in September at the Walmart NW Arkansas Championship, tying and beating the tournament record of 61 in the second round Danielle Kang in a playoff.

ALSO READ  The 2023 LIV Golf League schedule is starting to take shape with stops in Mexico, Singapore and Spain

As for the pressure of being a teen phenomenon, Thitikul admits she can’t ignore it, but she’s figured out how to turn it to her advantage: “It’s still so hard because I think players want to be on top and we put the pressure on ourselves, and many eyes are on us. … But at the same time, it’s like you can’t win every week, you can’t have a good day every day. It’s golf. I like to see pressure as a challenge. I put a lot of pressure on myself, but I see it as a challenge.”

Off the golf course, Thitikul enjoys spending time with friends, watching Korean television dramas and enjoying Asian food (Chinese and Korean are favorites). Although she doesn’t have a pet, she says she’s a dog person and prefers the mountains to the beach because she loves hiking.

But don’t expect too much lounging, hiking or other non-golf activities on the route from Thitikul after this Sunday’s season closures.

“We have a lot of work to do this off-season,” she says. There are many things I still have to learn – not just for next year, but for [beyond.] … But hopefully next year will also be fun and good for me. I really want to get a big win in my career. I don’t know if it will happen next year, but hopefully it will.”

These former Duke Blue Devils once teamed up to win an NCAA title; now they team up to earn an LPGA card at...